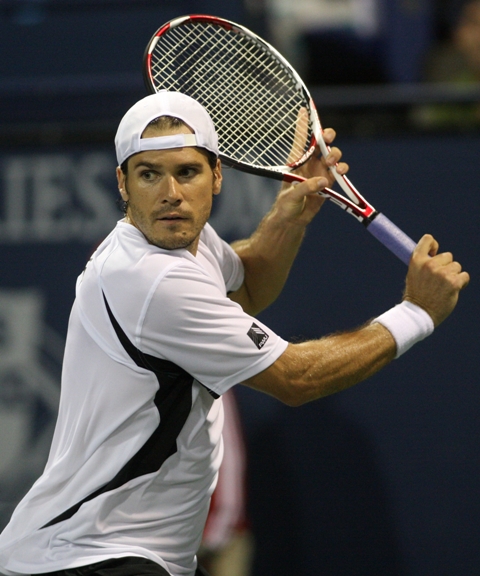 Westwood, Calif., (Feb. 20, 2013) – It would be unfair to say that Tommy Haas’ best tennis is still ahead of him, but there’s no denying the fact that the 34-year-old ATP World Tour veteran is still managing to play some of the best tennis of his career having reached the final of last week’s SAP Open in San Jose.

The current world-ranked No. 18-player Haas and former world-ranked No. 4 James Blake have been added to the already stacked lineup card for the inaugural Los Angeles Tennis Challenge featuring World No. 1 Novak Djokovic, Mardy Fish, Pete Sampras and Bob and Mike Bryan to be played March 4 at newly renovated Pauley Pavilion.

On Sunday, the former world No. 2 and Olympics silver medalist Haas was beaten by Canadian Milos Raonic, 6-4, 6-3. “I have always loved playing in L.A. and have had some of my best results there winning the LA Open in 2004 and 2006,” Haas said. “It is sad that the LA ATP event is leaving but I am ecstatic that the LA Tennis Challenge can help showcase professional tennis in one of the most important markets in the world.”

“Tommy and James are two of the most talented tennis players of this generation,” Gimelstob said. “Their shot-making and variety will surely entertain the fans at Pauley Pavilion on March 4th. We feel adding Tommy and James will complement an already exceptional field.

“The buzz is certainly building for the first LA Tennis Challenge, and we are confident this is shaping up to be a premiere event on both the sports and social calendar in the years to come.”

Haas has won one singles title since 2009, beating Roger Federer in Halle last year. Blake is a former world-ranked No. 4.

“I’m excited to join the already incredible field at the LA Tennis Challenge,” Blake said. “I’ve been spending a lot more time in LA, and as an American tennis player the loss of the ATP World Tour event is a huge disappointment. We need to start building a new event in Los Angeles and the LA Tennis Challenge is a positive step in that direction. This is a tremendous opportunity to watch some competitive and entertaining tennis, while raising some important funds for great causes. I am really looking forward to both being there and to participating.”

Added Haas: “Justin Gimelstob and Mardy Fish are two of my best friends, and when they asked me to support the event I jumped at the opportunity to help raise money for their foundations. In addition, being able to compete and get some intense match practice against one of my friends and rivals, James Blake, leading into one of my favorite events, the BNP Paribas Open, is ideal.

Three exhibition pro-set matches will take place beginning at 7 p.m. Haas will face Blake in the opening singles match while Djokovic will take on Los Angeles resident Fish in singles followed by a doubles match pitting Djokovic and his childhood idol Sampras against Southern California natives Bob and Mike Bryan.

“The field for a first-year event is incredible,” Haas concluded. “With guys like Djokovic and Sampras and the Bryan Brothers, and now adding James and me, we will make Pauley Pavilion the place to be the night of March 4th. I can’t wait to be there.”

It has also been announced that longtime and respected Southern California Tennis Association Executive Director Henry Talbert will be honored March 4 with the Gussy Moran Humanitarian Award that has been named for the 2007 SCTA Hall of Fame inductee who recently passed away.

The LA Tennis Challenge will be broadcast by Tennis Channel in the United States.