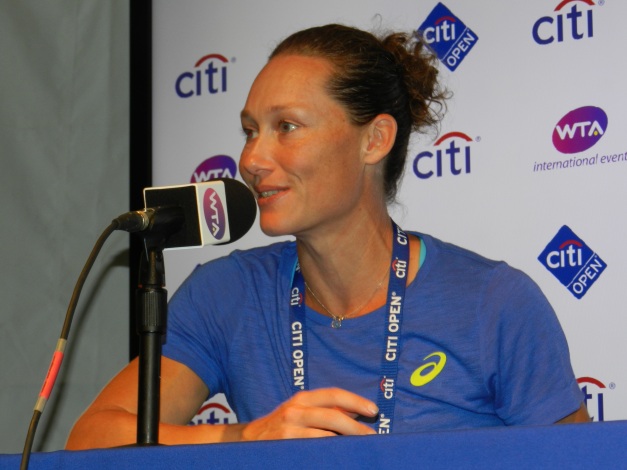 WASHINGTON (June 18)—Sam Stosur came out swinging today under the Washington sun. She won 91% of her first-service points against Alla Kudryavtseva in a 6-3, 6-0, 57-minute breezer and the #1 seed sent a message. “I’m off to a great start here, but the conditions are so different from where I’ve just come” she said.  As she said that, a heavy wind gust hit the media center and rocked the interview tent. And as soon as the press conference was over, a heavy rain hit the grounds.  The #1 seed, Stosur will now face Caroline Wozniacki in the second round.

Belgium’s Yanina Wickmayer is playing some of her best tennis right now, and she dispatched an always difficult first round opponent in Madison Brengle, who hails from Delaware just two hours away.

“For me, it was tough in the beginning to hang in there to keep fighting for every point,” Wickmayer told Tennis Atlantic in an exclusive interview after the match. “She makes you work hard, so I just tried to stay focused, to stay positive and try to play as aggressively as I could and I think I did that well, especially in the second set. I served well and I think I put a lot of pressure on her game.”

Those two matches, which started at 1:50 p.m. and 2:00 p.m. respectively, were the only tennis at Citi Open until after 7:00 p.m. after the rain finally relented.

In the second half of the rain-segmented day, Shuai Zhang dispatched fellow countrywoman and Lucky Loser Lin Zhu, 7-5, 6-4. Later, Jessica Pegula walloped Aleksandra Wozniak 6-2, 6-2. That hit she took before the match with the other Woz, Caroline, apparently did the Canadian little good. For Caro, she whisked past Hiroko Kuwata, 6-1, 6-1 in one hour and will compete in the marquee 2nd round match-up of this tournament when she takes on Sam Stosur on Wednesday.