Denis Kudla says it’s great to be back in Charlottesville.

“I was on the ATP tour main circuit pretty much all of last year, playing a lot of tour events and my ranking dropped a little bit,” he told me on Sunday in Charlottesville, Virginia. “I’m glad to be back here. I know I’ve played well here in the last couple of years I’ve played and I really look forward to getting going.”

Played well is an understatement for Kudla. The Arlington, Virginia native won the Petit A’s tournament here when he was 9 years old, and won the grown-up version of the tournament, the Charlottesville Men’s Pro Challenger, when he was 20. 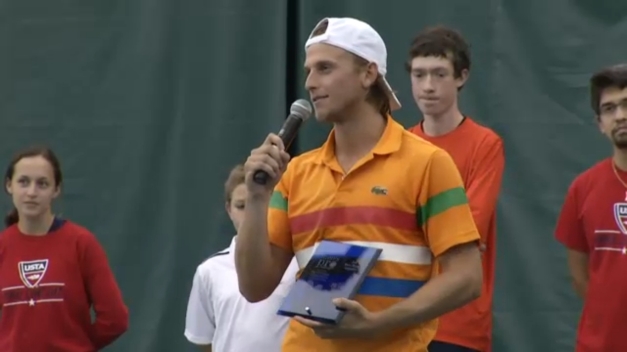 Kudla Win the Challenger in 2012

“It’s strange that I won my very first tournament here in Charlottesvile when I was 9 years old,” he reflected. “I’m 24 now and still back here playing. It’s pretty special.”

He was practicing with fellow Junior Tennis Champions Center alum Frances Tiafoe before our interview.  Kudla was a JTCC prodigy while Tiafoe was a kid growing up in and around the facility. This year, Tiafoe is the tournament’s top seed. I wondered if Tiafoe saw him as a big brother.

“I would say I’ve been around him his whole life,” he replied. “I wouldn’t say big brother, but I definitely try to be some kind of mentor. He’s playing unbelievable and I’m still learning stuff from him.”

Goals for 2017 involve “trying to get back in the top 100 and solidify my spot there again, try to stay healthy, that’s the biggest thing,” he said.  “It’s a long road, lots of up and downs, just try to stay away from the downs.”

Cubs or Indians in the World Series?

“I want the Cubs to win, but I think the Indians are going to take it.”

A long-time Philadelphia Eagles fan, Kudla also shared his thoughts on rookie quarterback Carson Wentz. “I like him. He came out a little too hot, but he came back to Earth. I think he’s got a great future.”

Sounds like my assessment of some of the guys on the tour. Kudla opens the tournament against Tommy Paul tomorrow afternoon on courts he’s known since a babe.