Angelique Kerber fought off a strong test from Karolina Pliskova to claim the Bank of the West classic title in Stanford.

The German needed over two hours to dispatch her young opponent 6-3, 5-7, 6-4 in a gripping final on centre court. This was Kerber’s fourth title of the year, which ties her with world number one Serena Williams for the most titles won in 2015.

Pliskova aimed to use her big serve and effortless power to hit through her opponent’s defence and managed to rack up 52 winners during the match. Unfortunately for the Czech, she hit just as many unforced errors which would ultimately prove telling. Kerber, on the other hand, was more positive with her ratio hitting 27 winners to 14 unforced errors. The efficiency paid off.

The fifth seed started the better of the two and broke to take the first set 6-3. But Plsikova kept fighting and in a long break-fest of a second set, the Czech managed to pull through 7-5. The trend continued in the third with neither player being able to effectively hold serve. Kerber upped the pressure at 5-4 with Pliskova serving to stay in the match, but it proved too much for the 22-year-old who double faulted twice before hitting an error on match point. 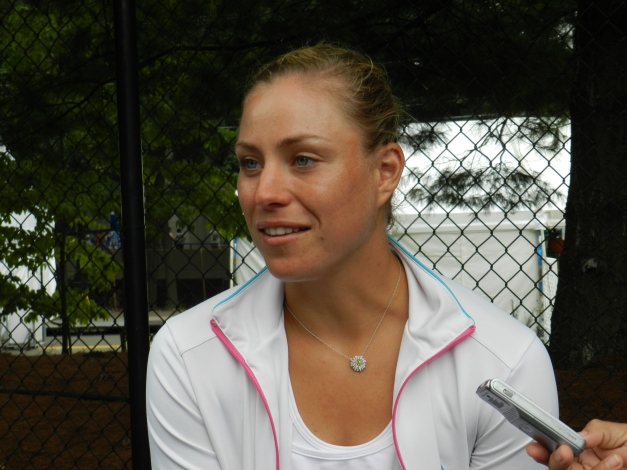 “I would first of all like to congratulate Angie,” Pliskova told the crowd in her on-court speech.

“She’s a really great player. I actually just told her that I don’t want to play her anymore in finals – she’s 2-0 against me in finals now, so hopefully the next time I can play against somebody else”.

The pair had met in the Birmingham final back in June where Kerber prevailed in another tight three set match.

“I want to say well done to Karolina for a great week,” Kerber said. “We always have tough battles when we play each other – you’re a great tennis player and a great person, and I wish you all the best in Toronto next week. And actually I think we’ll have more finals against each other in the future.”

Kerber now has four titles this year, all at Premier level. Can she go a step further and add a first grand slam title in New York?

As for Pliskova, she will break in to the world’s top 10 when the new rankings are announced. The Czech will now push for a top eight seeding at the US Open.