Tennis Atlantic will have on site reports on the site from local journalist Jessica Luzadas, reporting for us from the 2015 Delray Beach Open. Jessica’s main draw reporting starts today, and we will also have coverage next weekend on Friday, Saturday  and Sunday. Delray Beach is the US outdoor hard court stop on the ATP World Tour this week and a 250 level event. Here is a preview of the singles main draw. 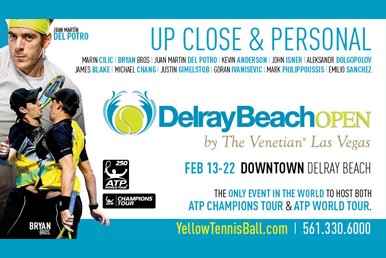 Delray has two top 20 players in the field this week, that is quite balanced.

(4)Ivo Karlovic vs. Dustin Brown
Brown beat Karlovic twice last season, and both players come off disappointing losses in round 2 of Memphis. Brown lost to Steve Johnson in 3 sets after beating Marinko Matosevic, and Karlovic lost to Austin Krajicek in 3, after beating Lukas Lacko in round 1. This is a matchup of big servers, and it is likely to come down to a tiebreak or two, I have Brown advancing in a slight upset, but Karlovic’s matches against non top players are always difficult to predict.

Ivan Dodig vs. Donald Young
A first meeting is on tap between these two, Dodig lost in round 2 of Memphis to John Isner after beating Teymuraz Gabashvili, while Young roared the semifinals with wins over Bernard Tomic among others before falling to Kevin Anderson. This match could go either way, and Young may be fatigued, but I still give him a slight form edge to advance to round 2 here.

Memphis finalist Kevin Anderson, a former champion in Delray, opens with a qualifier, and then should face Sam Groth, who he defeated in Memphis, yet again. Groth plays Rendy Lu in a rematch of a match he just played in Memphis, and won. Given Anderson’s style of play, he should be fine to reach the quarters over a qualifier and Groth. Denis Kudla has a nice chance at the quarterfinals as a wild card, Kudla, who qualified in Memphis, opens with Lukas Lacko, who isn’t in good form right now having lost three straight, and then a qualifier or Adrian Mannarino. Mannarino comes off a round 1 loss in Memphis to Young. Kudla will have his chance to defeat Anderson as well and reach the semis, but Kev should be the favorite to reach the semis at least this week week as the top seed.

The Karlovic/Brown winner will face a qualifier or Filip Krajinovic in round 2, I have Brown through to the quarterfinals to face American Steve Johnson. Johnson, a quarterfinalist in Memphis, opens with Mikhail Kukushkin who is up and down with his form and has lost 4 straight. After that Dudi Sela, the veteran Israeli, or young gun Andrey Rublev awaits in round 2, Rublev, a wild card, likely isn’t ready for prime time yet, even though he has a bright future ahead and is improving at the challenger level. Johnson just beat Brown in 3 sets in Memphis, and with that in mind, I have him into the semifinals this week against Anderson.

John Isner, who has never reached the final here but has three previous semifinal showings, he beat his first round opponent Marinko Matosevic 3 times last season, coming off the quarterfinals in Memphis, he should be able to reach at least the quarterfinals here in Delray, beating Matosevic, and then Igor Sijsling or a qualifier in round 2.  Sijsling comes off a round 1 loss in Memphis to Bernard Tomic in 3 sets. In the quarters, look for Isner against Viktor Troicki. Troicki opens with Stephane Robert, a journeyman veteran, and then Memphis quarterfinalist Bernard Tomic, or Malek Jaziri should await. Troicki comes off the quarterfinals in Zagreb, and the h2h between Tomic and Troicki is 1-1, that should be a great round 2 contest if it comes true, Tomic shouldn’t have too much trouble with Jaziri, but the Sydney champion Troicki should have the slightest of an edge. Troicki is 3-1 in the hard court h2h against Isner, and his form is better thus far this season, so Troicki is my pick for one of the semifinal slots.

Alex Dolgopolov opens with Teymuraz Gabashvili in round 1, Dolgo has lost three straight, and Gabashvili can at times play well, but the Ukrainian should be talented enough to reach round 2, and set up a meeting with Tim Smyczek. Smyczek is in great form thus far this season (he won the Dallas Challenger), and he opens with young American Stefan Kozlov, who lost in round 1 of Memphis last week and is still seeking his maiden ATP main draw win. Look for Smyczek to upset Dolgopolov and reach the quarterfinals, to face perhaps Memphis semifinalist Sam Querrey, or the Young/Dodig winner. Querrey opens with Alejandro Gonzalez. It’s hard to predict between Querrey and Young, but Querrey was quite impressive in Memphis and thusly I have him into the quarterfinals against Smyczek. Querrey is 3-0 in his career against Smyczek on hard courts, and as a result of that, I have Querrey as a semifinalist against Troicki this week.

Smyczek could perhaps even capture his maiden ATP title this week with his improvements in play since the start of the year, his draw of Kozlov, Dolgopolov/Gabashvili and then Querrey/Young/Dodig is a reasonable path to the semifinals, after that Troicki/Tomic/Isner are also beatable, and in a wide open field, there isn’t anyone in Delray that I can say an in form Smyczek playing at peak form would lose to, that said I have him as a quarterfinalist this week in my own bracket.

Anderson could meet Johnson for the third time this year, he has beaten him twice before on hard courts, including in Memphis, and with that in mind I have him through to the final.  Querrey and Troicki have a 2-2 h2h, I’ve been impressed with Troicki’s consistency and solid play since his comeback, and feel the Serbian is due to capture another ATP title, thus I have him winning this semi.

Troicki has 1 career h2h win over Anderson, and at this point in the tournament he should be fresher than the South African if they meet, with that in mind I have Troicki capturing his second ATP title of the season this week in Delray Beach.

Tennis Atlantic is proud to present on site credentialed coverage from local Delray Beach journalist Jessica Luzadas, who is reporting for us on site this week at the tournament. Jessica was on site today, and will provide coverage of the action tomorrow, and next weekend (Friday, Saturday, and Sunday) for Tennis Atlantic at the Delray Beach Open. Here is her first report-the editors

Young guns Yoshihito Nishioka, Thanasi Kokkinakis, and American veteran Robby Ginepri were among qualifying winners in the second round of qualifying, completed today at the Delray Beach Open in Delray Beach, Florida. The Japanese player Nishioka scored a win over American Marcos Giron a former UCLA product, he came back from dropping the first set 4-6 to win the final two frames 6-3 6-2, as Nishioka starting mixing in aces (8 over the final two sets) and frustrating Giron who wilted in the end, allowing Nishioka to win 29 out of 47 points in the third set. Previously, Nishioka defeated former VA Tech Hokie Patrick Daciek in the first round of qualifying in 3 sets 6-3 4-6 6-4.

Thanasi Kokkinakis continued his rise to ATP stardom, dominating Argentine Guido Andreozzi 6-3 6-2. Andreozzi clearly preferred playing on clay as he generated just one break point against the Australian, in a contest that barely last an hour. On Saturday, Kokkinakis likewise had no problem earning a win, beating wild card Ty Trombetta 6-1 6-4.

A player with much more experience than those two young guns, American Robby Ginepri, the former US Open semifinalist (the last American to reach the semis of a slam), defeated an in-form Aljaz Bedene 6-3 6-4. Bedene, previously reached the final in Chennai this year as a qualifier and also qualified for the Australian Open, but on this day Ginepri played more efficient tennis, breaking Bedene on 4 out of 5 chances, twice in each set, to win the match. Ginepri’s third round qualifying opponent will be JP Smith of Australia, the former Tennessee Volunteer beat Kiwi Michael Venus, who formerly played at LSU. The scoreline for that one was 2-6 6-2 6-4. Previously Ginepri beat Gianni Mina in round 1 6-2 6-2, and Smith beat young American Jared Donaldson who was coming off a win in the Memphis maindraw, in round 1, in an upset. Kokkinakis’ third round opponent will be American veteran Alex Kuznetsov, Alex K beat Chunan Wang of China in round 2 today 6-4 7-6(5). Kuznetsov beat 19 year old Spaniard Jaume Pla Malfeito in round 1 on Saturday 6-4 6-1.

For Nishioka, American Sekou Bangoura awaits in round 3 tomorow, Bangoura pulled off a slight upset over young American Noah Rubin 6-4 2-6 6-4. The 18 year old Rubin, who is 0-2 in previous ATP level main draw matches, will not have his third try at a main draw win in Delray Beach this week. Previously Bangoura beat Artem Smirnov 3-6 6-4 7-6(7).

The final qualifying spot will be decided between veteran Romanian Victor Hanescu, who normally has his best showings on clay, or American Eric Quigley. Hanescu beat James McGee 6-3 4-6 6-4 on Saturday and Pavel Krainik 6-2 6-3 today. Quigley beat Facundo Mena 6-7(2) 6-3 6-3 on Saturday, then slipped past Chase Buchanan, a former Ohio State product, in a 3 set epic today 4-6 7-6(7) 7-6(3). Tomorrow in Delray I will have coverage of the final round qualifying matches along with main draw action featuring exciting talents Alex Dolgopolov, Denis Kudla, and Dustin Brown among others.