Raonic Upsets Federer in Brisbane, Djokovic and Wawrinka off to winning starts in Doha and Chennai

Raonic Upsets Federer in Brisbane, Djokovic and Wawrinka off to winning starts in Doha and Chennai
Steen Kirby, Tennis Atlantic

Milos Raonic scored his second career win over Roger Federer, as the Canadian upset the Swiss legend 6-4 6-4 in Brisbane. Federer was suffering from the flu this week, and it showed, even though he reached the final. Raonic had that extra edge when needed to hold serve and grab a break in both sets, and he’s continuing to improve his bid for the top 10 with his 8th career ATP title.

Raonic needed three sets over Ivan Dodig, but his straight set wins over Lucas Pouille, and Bernard Tomic prepared him well for the final. Not much is new with Raonic’s game, but when he serves and returns as well as he did this week, he’s hard to stop.

Novak Djokovic will head into the Australian Open as a heavy favorite after his blistering warm-up run in Doha. The Serbian superstar and world #1 won his sixth consecutive tournament dating back to last season, and captured his first ever title in Doha with a thumping 6-1 6-2 win over Rafael Nadal. Djokovic has owned Nadal in recent years, and though the Spaniard played well before the final, he could only watch in awe as his game was dismantled from the start, later going on to compliment Djokovic’s performance.

Novak beat Dustin Brown, Fernando Verdasco, Leonardo Mayer, and Tomas Berdych as well this week, all without dropping a set, as he was rarely tested in Qatar.

Nadal lost his third ATP final in a row, but he still clawed his way past Pablo Carreno Busta in three sets, Robin Haase, Andrey Kuznetsov, and first time ATP semifinalist Illya Marchenko in the semifinals. Marchenko had the run of his life this week, scoring wins over David Ferrer, Teymuraz Gabashvili, and Jeremy Chardy with sharp, powerful baseline play. Things appear to be on the upswing for both players, and Nadal appears to be improving on hard courts.

The Lopez brothers, Feliciano and Marc, beat Philipp Petzschener and Alexander Peya in the doubles final.

Wawrinka was simply the toast of the town with routine straight set wins over Andrey Rublev, Guillermo Garcia-Lopez, and Benoit Paire before the final. He too looks to be a threat heading into the Australian Open as well, and could challenge Djokovic like he has in the past in Melbourne.

The ATP season has once more arrived with a flash as three 250 level events on hard courts will kick off the Australian Open warm-up swing. It’s time for previews and predictions of the next editions of ATP starting with Brisbane. 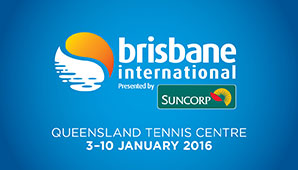 All of the seeds are top 20 players, and two of the world’s top 10 are in sunny Australia to start their ATP seasons off as this is once again a strong 250 level event

Troicki had 40 match wins and just 29 losses last season but the second half of his year was relatively disappointing given how good the first half was. He’s still in the top 25 however and needs to get his year off to a good start to keep his ranking up.

Johnson made major strides in 2015, going a comparable 37-29 and getting himself nearly into the top 30. The American has built his game beyond a quality forehand and posted an ATP final and semifinal to end the season last year. This surface and venue suits his game well, and an upset win could lead to a dark horse run to start the season.

Simon went the opposite direction of Dimitrov in 2015, and holds a 4-0 h2h edge against the Bulgarian, making him the favorite in this match. The defensive baseliner went 43-24 in 2015 and snuck himself into the top 15 at 31 years of age. Dimitrov, at 24, still has time to make good on his tremendous talent, but he was one of the biggest disappointments of 2015 going 32-22 and failing to break into the top 10. Now ranked 28 it’s harder for him to get good draws, and an early loss to a player of Simon’s quality could set him back even further given he’s defending a semifinal result last year here.

The teenager Chung is already well on his way to being South Korea’s most accomplished male tennis player, as he’s nearly broken into the top 50 at just 19. After a strong 2015 on the challenger tour, and an even .500 campaign at the ATP level, this will be the first full time ATP year for the Korean, and he’ll need to win matches like this to maintain his ranking.

Groth is the home favorite and his big serves suit the hard court surface, though he plays with such thin margins of error given he lacks an ATP caliber return game to compliment the massive serve he packs. He was below .500 at the ATP level in 2015, and I see Chung having made enough improvements in the off season to win this match.

Roger Federer won last years edition of this tournament and given he’s still the world number 3 who went 63-11 against the world’s best competition last year, he should be able to cruise into, at least, the semifinals with limited stress.

Federer’s first opponent will be either wild card Ben Mitchell, a home Aussie, who has never been ranked higher than 200 or won an ATP match (0-4), or qualifier Tobias Kamke, a former top 70 journeyman who is just 56-95 career at the ATP level. Mitchell likely has a slight edge as the home player but Fed should cruise regardless in his first match. The Simon/Dimitrov and Troicki/Johnson quarter is intriguing, any of the four players could make it through, with Simon being the favorite, and Johnson has a potential dark horse. Federer has won his last five meetings with Simon, and that should be his path to the semis.

Marin Cilic went 35-19 with a shortened season last year and has a relatively easy path to what should be his first semifinal this season. Cilic will open with the Chung/Groth winner and could face the #8 seed Dominic Thiem in the quarterfinals, presuming the Austrian avoids being tripped up by wild card James Duckworth in round 1, and either Denis Kudla or wild card J.P. Smith in round 2.

Thiem went 37-27 and broke into the top 20 last year but hard courts don’t suit him like clay does, and I wouldn’t put it past the quality ball striker Kudla to knock him off in round 2. Kudla is in the top 70 now and is looking for more ATP success after strong challenger results last year. Cilic over Thiem is my quarterfinal pick. given the surface.

Kei Nishikori has made three consecutive semifinals in Brisbane and after a 54-16 2015, he looks to improve and get himself back into the top 5 this season. His counterpunching abilities should be more than enough to handle either Denis Istomin or Mikhail Kukushkin in his first match. Istomin is 2-1 against Kukushkin on hard courts and should have the slightest edge to advance in round 1.

Nishikori is nearly certain to meet Bernard Tomic in the quarterfinals, as the Australian has an easy draw consisting of aging serve and volleyer Nicolas Mahut, and the Radek Stepanek/Dusan Lajovic winner. Tomic’s junkballing is likely to face serve and volleyers in his first two matches presuming Stepanek beats Lajovic, who much prefers clay. Stepanek had a rough year last year and was injured for part of it, still the veteran has the desire to compete left in him.

Tomic went 40-27 last year, and tends to play well in Australia, but Nishikori should prove too stiff of a test in the quarters. The Japanese #1 has a 2-0 h2h and beat him in the Brisbane quarters last year.

Milos Raonic went 33-15 in 2015, and had to deal with injuries, including back problems at the end of last season. The Manitoba Missile fell from the top 10, but he still has a powerful serve and a great hard court game when healthy. Raonic won’t be tested until the quarterfinals against most likely David Goffin, as a qualifier will be his first opponent, either veteran Ivan Dodig, or ATP main draw débutante Olivier Anderson, a 17 year old Aussie who beat veteran Tim Smyczek to qualify. Anderson seems to have a bright future ahead.

Goffin had a great 2015, going a career best 38-25 and bursting into the top 20. The undersized ball striker posted consistent results and helped Belgium reach the Davis Cup final as well. To maintain his ranking he’ll need to beat players like his round 1 opponent Thomaz Bellucci, a streaky Brazilian, and the Yoshihito Nishioka/Lucas Pouille winner. Nishioka is on the rise, already earning an Aussie Open wild card, and the 20 year old Japanese was strong in qualifying. Pouille is a French talent who made an ATP breakthrough last year, but the speedy Nishioka should be able to handle his powerful forehand. Nishioka could knock off Goffin but I wouldn’t count on it.

Goffin beat Raonic in Basel last fall, but given it’s outdoor hard courts, as long as Raonic can stay healthy he should serve well enough to reach the semis and face off with Nishikori.

Given it’s the start of a new season there are multiple dark horse shots in this field, but Johnson could beat Troicki and Dimitrov/Simon, two quality wins, to reach the quarterfinals and face off with Federer, a result that would continue his improving results from last season. This surface and venue suits him well, and we’ll see what Stevie J can do.

Federer is 4-1 on hard courts against Cilic and Nishikori has the same 4-1 mark against Raonic, though he lost to him in Brisbane last year. They should be close and quality semifinals, but the top two seeds are favorites.

Federer has won the last three meetings against Nishikori, the gap between them isn’t considerable, but it’s still there, and the Swiss should take the Brisbane title.