One of the strongest ATP 500 level tournaments of the year will take place once again in Rotterdam, as many of the ATP World Tour’s best have included a stop in Holland on their 2017 spring tour calendars. Here is a preview, with predictions of all the action. 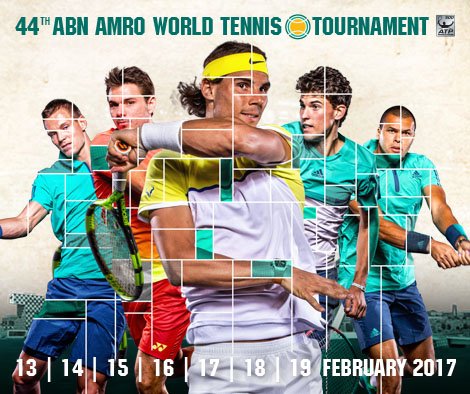 Despite a lack of top 5 players, Rotterdam boasts seeds that are all ranked in the ATP top 20, and nearly all of the opening round matches feature quality ATP caliber contests, the winner will not have had an easy road to the title.

Cilic will have to lean on a 2-1 h2h edge against his French opponent, as he’s endured a miserable start to his season, with just one win in three matches. Despite being the top seed, he drew a difficult opponent in Paire, who has enough weapons to upset higher ranked players, and this time is entering Rotterdam in good form, after reaching the semifinals in Montpellier. Cilic is the favorite, but I’ll go with Paire to continue his good form. The Croatian #1 has looked lost in matches thus far in 2017 and Paire won’t let him find rhythm.

Gasquet has won his last two matches against Troicki but they have split the h2h 2-2, and Troicki isn’t in bad form, coming off of the quarterfinals in Sofia. The Montpellier finalist Gasquet may be fatigued entering Rotterdam, which would give Troicki a shot, but otherwise the French veteran’s shotmaking should allow him to advance.

A first time between this pair, Dimitrov is red hot and on the cusp of entering the top 10 after winning his second title of the season at home in Sofia. Zverev lost his opening match in Montpellier, and looked to be back down to earth after a run to the quarterfinals in Melbourne. Dimitrov is a clear favorite given his red hot form, but if he’s fatigued, Zverev’s serve and volley could flummox him.

After three straight wins by Thiem, Zverev finally got a victory at the end of last year against his fellow young gun. The young German is 6-1 on tour to start the season, as he took the title in Montpellier, showing no signs of frustration after his struggles in Davis Cup play. Thiem has lost two straight matches and has been somewhat pedestrian so far in 2017, presuming Zverev isn’t out of gas, despite being lower ranked, he should be the favorite.

The winner of Cilic/Paire will draw a young gun, either Russia’s Karen Khachanov or Croatia’s Borna Coric. Coric hasn’t won a match since last Summer, while Khachanov hasn’t played his best either, that sets up Paire to defeat Khachanov and reach the quarterfinals, opposite Jo-Wilfried Tsonga. Tsonga, a semifinalist in Montpellier, is slated to face 18 year old Stefanos Tsitsipas, a Greek talent who is making his ATP main draw debut, with most likely Sydney champion and Sofia quarterfinalist Gilles Muller to follow. Muller opens with Dutch wild card Tallon Griekspoor, age 20, who is also making his ATP main draw debut. Tsonga should beat the young Greek, Muller, and Paire to reach the semifinals, putting him one match away from his former best result in Rotterdam, where he was finalist in 2011. Tsonga is 3-0 in the h2h vs. Paire, and 2-1 vs. Muller at the tour level.

The Gasquet/Troicki winner will take on former champion Tomas Berdych, presuming Berdych puts away qualifier Marius Copil, who plays a poorer version of his style of tennis. Berdych leads Gasquet 8-7 in the h2h, and has won the last two meetings, however, Gasquet is likely in better form, and thus I have the Frenchman prevailing to reach the quarterfinals. Defending champion Martin Klizan opens his title defense against Fernando Verdasco. Klizan trails Verdasco in the h2h, but finally found a bit of form, reaching the quarterfinals in Sofia last week. Klizan likely wins in round 1,  but the winner of Philipp Kohlschreiber/Lucas Pouille will be a tough opponent in round 2. Kohlschreiber may not be totally fit, while Pouille hasn’t played well this season, thus I have Klizan reaching the quarterfinals before falling to Gasquet.

The winner of Zverev/Thiem will face a veteran, either Gilles Simon or Nicolas Mahut, Simon has a h2h edge over Mahut, while Zverev is in the best form of this section, setting him up to at least reach the quarterfinals. Spanish veteran Feliciano Lopez hasn’t played great thus far in 2017, but he gets the best draw of any player in the tournament. Qualifier Pierre-Hugues Herbert is his first opponent, with qualifier Evgeny Donskoy or Marcel Granollers to follow. Lopez should ease past Donskoy in round 2, before falling to Zverev in the quarterfinals.

Sofia finalist David Goffin is likely to get a rematch of that final with Grigor Dimitrov in the quarterfinals. Dimitrov faces lucky loser Denis Istomin or qualifier Aljaz Bedene after facing the older Zverev brother, while Goffin opens with Russia’s Andrey Kuznetsov, who is struggling, with Robin Haase or Florian Mayer to follow. Given Dimitrov just beat Goffin in Sofia, and before that Melbourne, Dimitrov is the favorite to reach the semifinals from this section.

Fellow Frenchman Gilles Simon could make a run from the bottom half, but Paire has the most upside here. He has a winnable match against Cilic, and a path to the quarterfinals. Tsonga is a tough opponent, but he’s also not unbeatable, and this is a great chance at ranking points for the mercurial Paire.

Tsonga has won his last three contests against Gasquet, it should be a close contest if they meet in the semis,  but Tsonga’s aggressive play likely gives him an edge.

Despite a 2-1 h2h lead for Zverev, Dimitrov has been playing top 5 caliber tennis this season. Fatigue should weigh on both players equally, but it’s hard to pick against Dimitrov’s positive form right now.

Despite Tsonga leading the h2h 4-0, Dimitrov is simply playing better, and should finally be able to overcome his opponent in this potential final.