Nick Kyrgios claimed ATP title #4 and his first ever in Australia defeating Ryan Harrison 6-4 6-2. Kyrgios overcame questions about the fitness of his leg early in the week, he needed three sets against Matt Ebden, Alexandr Dolgopolov, and Grigor Dimitrov. Despite the shaky start, Kyrhios improved as the week went on and really pressed the gas pedal when he needed it to start the season. Kyrgios continues to be a player of much promise, and now he heads to the Australian Open brimming with confidence, back in the ATP top 20, and hopefully fit.

Harrison continued his resurgence at age 25, he dropped sets against Leo Mayer and Yannick Hanfmann but won the third set with ease in both matches, then he defeated Denis Istomin and surging young Aussie Alex De Minaur, winning that match in three sets by taking a second set tiebreak and a 6-4 3rd set. Harrison reached 2 ATP finals last season and he’s already halfway to that number in the first week of 2018.

Gael Monfils won his first title since 2016 with a comprehensive 6-2 6-3 victory against young gun Andrey Rublev in the Doha final. Monfils got a walkover in the semis against Dominic Thiem, and despite dropping sets to Paolo Lorenzi and J.L. Struff, he seemed to kick the cobwebs off his game pretty quickly, defeating Peter Gojowczyk in straights in the quarters and then taking it to Rublev, who’s shotmaking was erratic when it mattered most. Monfils only made one final last year so he’s already matched that in 2018.

Rublev reached a second career ATP final and picked up 2018 where he left off in 2017. The young Russian found his range against Cedrik-Marcel Stebe, Fernando Verdasco, Borna Coric, and Guido Pella, winning tough matches against both Verdasco and Pella. He’s now a trendy dark horse at the Australian Open.

33 year old Gilles Simon turned back the clock and had his best week on tour in quite some time, taking home the title in Pune 7-6 6-2 over in-form South African Kevin Anderson. It’s Simon’s first title since 2015 and gives him renewed hope and confidence in his tennis after winning just 16 matches last year. Simon beat Tennys Sandgren, Roberto Bautista Agut, Ricardo Lara, and top seed Marin Cilic, that semifinal win coming in three sets as he was a brick wall against Cilic’s powerful groundstrokes.

Simon isn’t the most exciting player to watch, but he was impenetrable against some big hitters, Anderson being one of them. Kev beat Thiago Monteiro, Mikhail Kukushkin, and Benoit Paire, dropping sets to Kukushkin and Paire but still reaching the final. It’s Anderson’s first final since last year’s US Open.

The ATP 250 in Doha on hard courts to start the season is normally the ritziest 250 on tour but with most notably Novak Djokovic’s absence it plays host to one of the weaker fields it’s had in recent memory. ATP Next Gen stars Dominic Thiem, Borna Coric, and Andrey Rublev are presented with a great chance to make a run. Here is your full preview, with predictions. 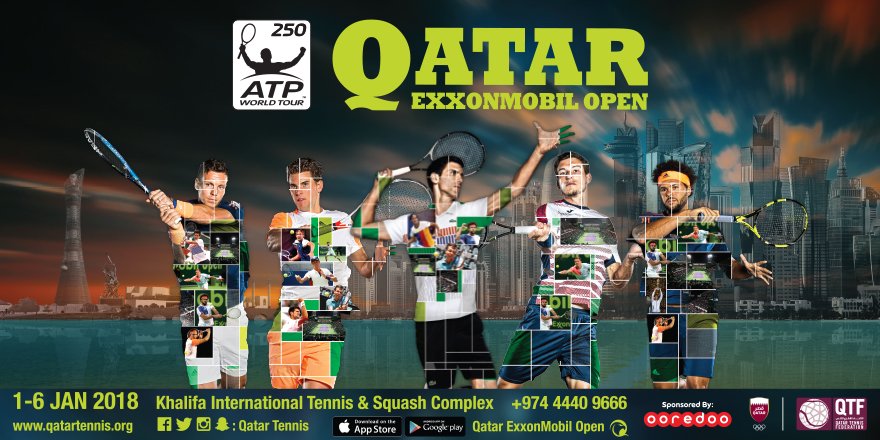 Having cemented himself in the top 5, Thiem leads the Doha field and will open with Evgeny Donskoy. Thiem needs to focus on keep himself fresher in 2018, and he’s also going to be playing with a target on his back all season. That said, he has the game to put away Donskoy and either Malek Jaziri or Aljaz Bedene, Jaziri tends to step up his play in the Middle East, Bedene, who is back representing Slovenia, had a great 2017 though and should be opposite Thiem, falling in round 2.

French veteran Richard Gasquet opens with one of the oldest players on tour, Victor Estrella, he’ll then get another young gun in this draw, Stefanos Tsitsipas of Greece, or veteran Florian Mayer in round 2. The Greek won 4 matches on the main tour last year and will be looking for a big scalp to start the season, that said Gasquet is good enough when fit I have him defeating everyone into the semifinals, including Thiem in the battle of backhands.

Another veteran hoping for a good 2018 is Tomas Berdych, the Czech won 35 matches but hoisted no titles in 2017 was forgotten for much of the season. He’s better than J.L. Struff, and either Paolo Lorenzi or wild card Gael Monfils though. Monfils had yet another season derailed by injury last year, shutting down after the US Open, he hopes to be fit to start 2018.

Serbia’s Viktor Troicki faces ATP debutante Matteo Berrettini, while his countryman Filip Krajinovic takes on Peter Gojowczyk. Krajinovic had an incredible 2017 winning 71 matches in total (only 5 on the main tour) and reaching the ATP Paris Masters final. After tearing up the challenger tour look for Krajinovic to rise defeating Troicki and Berdych to reach the semifinals.

Pablo Carreno Busta had a career year in 2017 but it still doesn’t seem like he’s appreciated enough. PCB has transformed into an all court performer, but despite his top 10 ranking he’s an underdog against Coric in his opening match. Coric is a talent but posted a below .500 tour record in 2017, PCB should defeat Coric and either Nikoloz Basilashvili or Thomas Fabbiano to reach the quarterfinals.

Russia’s young gun Rublev is my choice to reach the semifinals, Rublev just beat PCB in Abu Dhabi and his path is Cedrik-Marcel Stebe, then a veteran, either Fernando Verdasco or Dudi Sela, before facing PCB or Coric in the quarters (most likely).

The section with Albert Ramos as the highest seed is the weakest part of this draw, Ramos faces Guido Pella in a toss-up contest, Spanish veterans Feliciano Lopez and Guillermo Garcia-Lopez will square off, qualifier’s Mirza Basic and Stefano Travaglia are favored against Andreas Haider Maurer and local wild card Jabor Al-Mutawa respectively. Lopez did not have a great year last year but he still should be favored to survive and reach the quarters where he should defeat Ramos.

I’ll take Gasquet’s guile and shotmaking to take home the Doha title over the young gun Rublev, this is a pretty open field so anything could happen, but look for this contingent to get off to a good 2018.