On a sweltering Sunday in Washington, Sascha Zverev was overwhelmingly re-elected the Champion of Citi Open, which seemed to culminate the celebration of 50 years since the tournament began in 1969, in a National Park in the Nation’s Capital.

That this swash-buckling lanky youngster will someday win any number of Grand Slams is certain, and the crowds gathered here in Washington have collectively sensed that. Even with the likes of Andy Murray and Kei Nishikori in the draw to pique fans interests, Sascha Zverev held this place and its spectators in a trance every time he stepped on court, hit the practice courts or tried to leave the place at the end of the day. He survived a week where others wilted in weather delays, brushing aside Malek Jaziri and Brother Mischa, outlasted Kei Nishikori and steamrolled Tsitsipas. Today was no different. Zverev punished de Minaur with his forehand and his backhand in de Minaur’s maiden 500 final for a 6-2, 6-4 triumph in 74 minutes. Zverev  came into Washington less comfortable with himself a year ago and still worked through the field for his title. He was snide with reporters at the time, replying to one, “Have you ever seen me play a match?” and replying to another that he’d already beaten the best players and it was irrelevant how he’d played against them in a grand slam.

This year, he was all smiles, taking it easier on the media in his responses and generally seemed like he was having a lot more fun with it.

He started the week by telling us “Doesn’t everyone love attention?”, and ended the week with a second consecutive Citi Open title. We all love attention, Sascha, and we love to lavish it on champions. Well done.

Mackenzie McDonald is loving the hard courts summer. And he had some confidence headed into tonight’s showdown with two-time grand slam champion Andy Murray when we spoke with him on Sunday afternoon at the Citi Open in Washington.

“I love that (hard court season) is in the states so we get a good crowd cheering on all the Americans,” he said. “I definitely grew up on hard courts and I love hardcourts and I think it suits my game. It’s definitely a good time to be in the States during the Summer.”

As far as battling Murray in his next match, McDonald said, “He’s obviously a great player, has had a great career so far. He’s a grand slam champion so it’s gonna be pretty cool sharing the court with him.”

McDonald seems to like his chances against Murray. “He’s a little rusty. I think there are definitely some positives for me going into the match. I think I’m playing really good tennis so it should be a good match.” 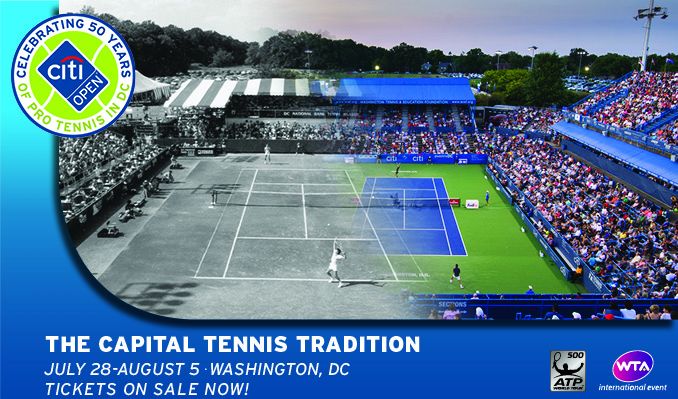 Patience paid off for Japan’s Yosuke Watanuki on Sunday as he advanced to the main draw of the first ATP World Tour event in his career after a 6-4, 6-4 victory over top qualifying seed Jason Kubler at the Citi Open in Washington.

“I am so happy for the first time for the main draw in the ATP tour. I am so happy now,” he told me after the win. “This is a first time, because I played (in qualifiers) two times in Tokyo,” he added. 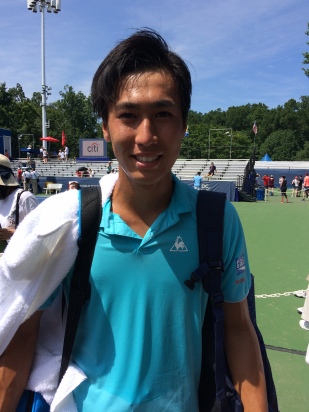 Despite having played yesterday, while his opponent had a bye, he believed it gave him the upper hand. “That was good for me,” he said. “It’s especially for the ball and the court. In the beginning, I could play much more relaxed.”

We got lots of twitter activity when we mentioned Watanuki yesterday and asked him about it. “For the fans, thank you so much for every time that you support me.”

The 20-year-old will face wild card Daniil Medvedev on Tuesday.

The four top seeds received a Bye in the qualifying tournament’s first round, meaning they only had to win a single match to qualify. That turned out to be a bridge too far.

It wasn’t just the number one seed going down today, but the 2 and 3 seeds as well. American Donald Young worked through 3 seed Jason Jung in just under two hours with Jung going down in retirement. Young’s prize for qualifying is a prize-fight against Stan Wawrinka Monday on Stadium Court.

The 2 seed wasn’t safe, either, with American Mitch Krueger making the main draw here in his second attempt. Krueger routined 2nd seed Ramkumar Ramanthan, a finalist in Newport, and was never broken in the match. After the match, Krueger also agreed that playing yesterday was a plus.

“I definitely think getting a match under my belt yesterday was really helpful, because you can practice all you want, but it’s hard to simulate match conditions in practice,” he said. “I was lucky because I played on the same court (Grandstand 1) as yesterday, so I was more comfortable and knew what to expect. It’s always great to qualify and earn your way in.”

Krueger’s first round match is against Pierre Hugues-Herbert.

The Washington weather was out of character for opening day at Citi Open this morning. Not too hot nor too muggy. The mercury rarely fails to top 90 degrees at a day session at Rock Creek Park. We weren’t complaining about the weather today, so we found something else to gripe about—the local talent getting sent home on Day One.

Baltimore’s Sophie Chang had problems with her serve and handed a win to top qualifying seed Ysaline Bonaventure on Court 2. With 15 double faults, Chang still kept the match amazingly close, losing to Bonaventure, 6-4, 7-5. Some of her first serves were way off, going all the way to the baseline. Chang’s serve deserted her today despite the total crowd support of 50-75 fans at the match. Tomorrow, Bonaventure faces Allie Kiick for a spot in the main draw.

Fairfax, Virginia’s Natasha Subhash, introduced in a great piece in City Paper, failed to live up to all the hype today. I’m certain she has better days ahead after she got served a bagel and a breadstick by Mayo Hibi in sixty minutes. I was surprised the match lasted that long.  Tomorrow, Hibi squares off against Sofya Zhuk.

Lagardere’s new sign, 18-year old Danny Thomas, got a tough draw with Donald Young in qualifying but still looked good, taking the second set from the 29-year-old veteran before falling in three sets. Young will try to enter the main draw tomorrow with a win over Jason Jung.

Richmond’s Hunter Koontz is a former Virginia Tech athlete and current tennis pro at a country club. Today was no country club for him as he was ousted by the grizzly 32-year-old Frenchman Vincent Millot, who I last saw play when he qualified for last year’s U.S. Open. Koontz managed to take the second set and had major crowd support. Millot has a tough order tomorrow, facing Christopher Eubanks, who looked stellar on Saturday.

Former UVA star Thai-Son Kwiatkowski was the only winner with local connections today, and he persevered in three sets against Ilya Marchenko. Kwiatkowski draws Antoine Escoffier on Sunday.

I’d call Louisa Chirico almost local, and she looked so dazzling against Lauren Davis today in a straight sets win, I’d give her an honorary membership to the DMV region. For all the time Davis spent with Serena Williams, I thought she must have taught her how to play possum with an opponent. After giving up the first set 6-1 to Chirico, the Ohio native fought back and was up a break in the second set. Then the nerves turned on Davis after she was broken back and she and never got over it. She smashed her racquet with a lot of power, so it looks like Williams taught her something after all.

It’s a tiny qualifying field, made even stranger for the men by serving up four byes. That means tomorrow, Alex Bolt, Jason Jung, Jason Kubler and Ramkumar Ramanthan can qualify with a single Sunday win.