It’s Hardware Sunday at New York Open, and A Maiden Title On the Line for Opelka, Schnur 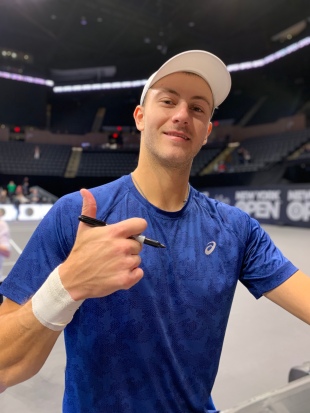 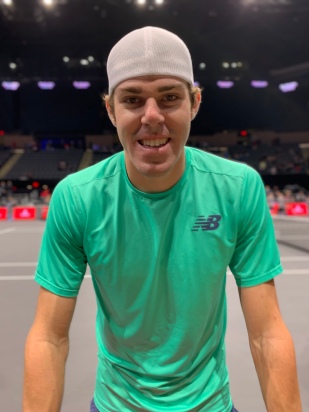 It’s been a great week for both American Reilly Opelka and Canadian Brayden Schnur. Tonight, one of them will have a “1” in their little stats column on your ATP scoring app as one will pick up their first ATP tour-level singles title at the New York Open in Uniondale, New York. I looked at the odds on my phone before yesterday’s matches, and Betfair had the odds of this final matchup at 10-1. Savor this rare moment of upset tennis in the men’s game, because it comes with the bonus of watching a first-timer hoist the hardware. In this case, it’s a giant abstract painting, but you get the idea. 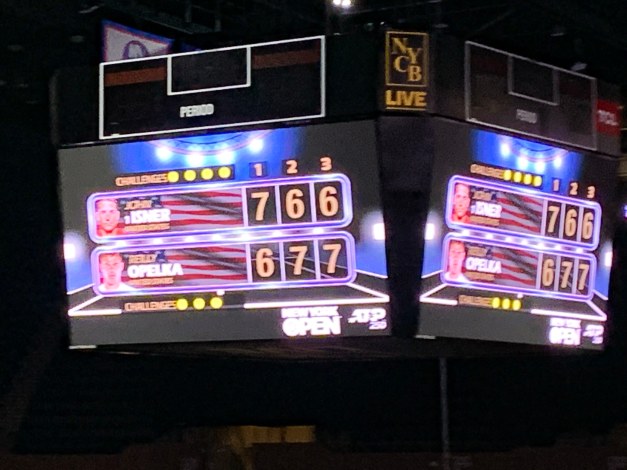 Reilly Opelka got there by beating a familiar nemesis in John Isner, and the man in whose house Opelka watched the Superbowl just two weeks ago. Opelka had shocked Isner in Melbourne at the Australian Open in January, and Opelka didn’t let any nerves get to him even after he’d lost the first set tiebreak. Two more tiebreaks that did go his way landed Opelka in the final after shaking off six match points from Isner. The performances by the pair, 6’10 and 6’11, was as bold and pugilistic as the gentlemen’s size. In the arms race that has become professional tennis, these players are the heavy artillery of the game, with popping returns and 136 mile per hour serves the normal. 81 aces made for a record-breaking but very boring night of tennis. It’s the most aces combined in a best of three match since they started tracking these things in 1991. Generally speaking, it paid the bills but wasn’t easy to watch.

Brayden Schnur got here on the local train. He ran through 17-year-old Long Island native Cannon Kingsley and up-and-comer Alexei Popyrin to qualify before earning the first ATP win of his young career over Columbia University sophomore Jack Lin. It all started to click for Schnur when he saved 2 match points and came back from a 5-2 third set deficit to knock out #3 seed Steve Johnson last Wednesday.  Friday saw him survive a marathon against veteran Paolo Lorenzi in three sets against another player who was playing on another level this week. That all made yesterday’s upset of #6 seed Sam Querrey less surprising than his other results of the week,

I’m sure some tournament organizers were in agony last night, as it might be less attractive for a casual fan to bundle up and take the Long Island Railroad out to see the Opelka-Schnur prize-fight. An Isner-Querrey final would have been preferred by the marketers and branders, none of which are in short supply in New York. Last year’s Anderson-Querrey final shouldn’t be the norm. The top seeds fly out of ATP 250 tournaments so often that you can’t often tell the difference between a Newport and a Challenger. For a true fan, there can be nothing more exciting at a 250 than being guaranteed to see a young player win his first pro level title.

Here’s to Super Sunday. The doubles final of Santiago Gonzalez and Aisam-Ul-Haq against Germany’s Kevin Krawietz and Andrea Mies goes live at 2:00 p.m. and the singles final starts at 4:00 p.m.

Embed from Getty ImagesAryna Sabalenka gave her fans a taste of things to come with a title in Shenzhen in the first tournament of 2019, as she survived tricky Alison Riske, 4-6, 7-5(2), 6-3. Sabalenka started the day with a semifinal win over China’s Yafan Wang, 6-2, 6-1 before turning around and handling Riske, a 2017 and 2018 finalist at the event.

In her first tournament where she was the top seed Sabalenka was up to the challenge. All week, she delivered, persevering in three sets against Tatjana Maria, winning in straights against Ekaterina Alexandrova and beating a depleted Maria Sharapova before doing in Wang and Riske on Sunday to win her 3rd WTA tour level title.

Riske rolled through third seed Qiang Wang in straights, beat Evgeniya Rodina in three sets before steamrolling Sorana Cirstea in straights and beating a hobbled Vera Zvonareva to reach the final. Riske will climb back into the top 50, while Sabalenka inches closer to the top 10. 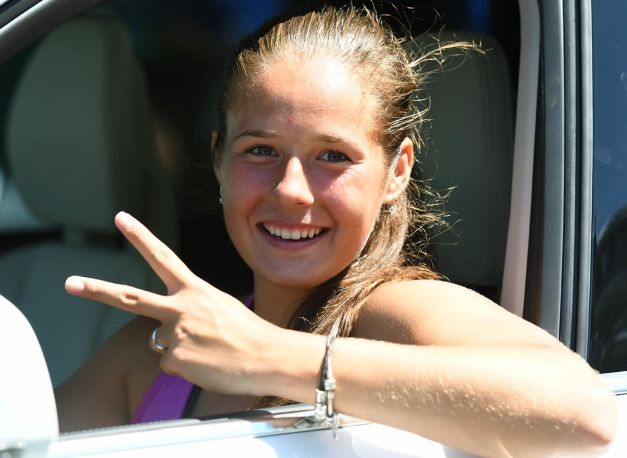 DANIEL ISLAND, S.C. – Ben Navarro, the CEO of Charleston-based Sherman Financial Group and the founder of education non-profit Meeting Street Schools, has acquired the sanction of the WTA Volvo Car Open along with the operations of the Family Circle Tennis Center and Volvo Car Stadium. With this change, Charleston Tennis LLC will now become a locally-owned and operated organization.

“I look forward to building on the current tournament tradition that is already 47 years in the making with the Volvo Car Open,” said Navarro. “Bob Moran and his team have created a tennis legacy in Charleston with the event and its facilities. Our goal is to continue to grow the tournament’s impact, promote junior tennis in Charleston, and make the sport more accessible for all. Personally, Charleston Tennis LLC’s mission of giving back and making a positive influence on our community align with my family’s values and beliefs.”

“I’ve had the pleasure of getting to know Ben over the last year through his commitment to growing tennis here in Charleston. His club LTP Tennis has hosted numerous ITF and junior tournaments culminating with the US Girls Clay Court National Championship, held this past July,” said Bob Moran, President of Charleston Tennis LLC. “I’m blown away with not only Ben’s commitment to tennis, but his love for this community. His work with Meeting Street Schools is truly inspiring. Our team is excited to get started building towards the 2019 Volvo Car Open and working with Ben and his team to create an even bigger and better experience for our players, fans and partners. With this commitment and investment to build world-class experiences by our new owner, and the support of our title sponsor, Volvo Car USA, we will continue to remain a vibrant part of the Charleston community for years to come.” 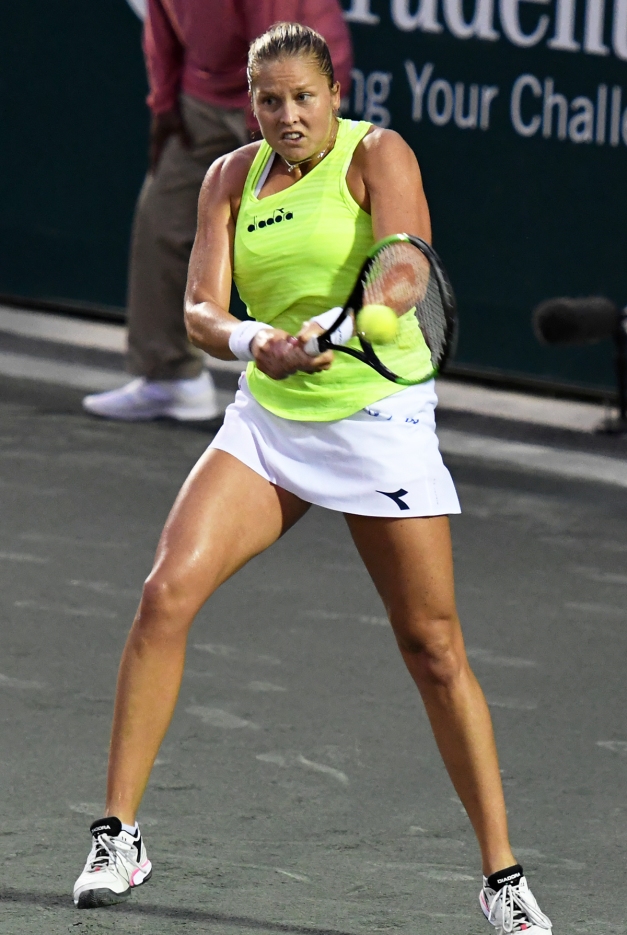 The Volvo Car Open is the largest women’s-only tennis tournament in North America. The international event attracts players and fans from across the globe and reaches more than 20 million fans worldwide via The Tennis Channel and international broadcast partners. The Family Circle Tennis Center is a public tennis facility with 20 championship courts and a 10,200-seat stadium. The center is a year-round facility with daily adult and junior tennis programing, including an on-site, full-time tennis academy. In addition, the stadium hosts an annual concert series and a broad range of programs and events.

The Volvo Car Open contributes a direct impact of 30 million dollars into the local economy each year through visitors, hotels, restaurants, travel and tourism. Indirectly, the tournament generates billions of impressions through its international broadcast, press coverage and ad campaign, all collectively promoting the Lowcountry domestically and abroad. The tournament is responsible for housing all players, officials, out-of-town staff and domestic and international TV production crews. More than 2,500 room nights the week of the Volvo Car Open are booked for staffing alone. This does not account for the tournament’s average of 90,000 attendees, in which 50 percent are from out of town and who will shop, dine and take in attractions while attending the event.

Steve Simon, WTA CEO and Chairman stated, “Rooted in the WTA’s rich history as one of the very first tournaments in 1973, it is a pleasure to see both the tradition and growth of this event continue. We are delighted to welcome Ben’s ownership to the Volvo Car Open and look forward to the positive impact this will have on the continued success of one of the premier women’s tennis events in the world.”

In conjunction with Tennis Channel and WTA Media, the Volvo Car Open is showcased from the first ball struck in main draw competition to the last ball played in finals, throughout the U.S. and 174 international partners. The tournament receives more than 100 hours of tennis; live from Charleston, broadcast across the globe to millions of fans.

Navarro is also the owner of LTP Tennis Club in Mount Pleasant, S.C. He and his wife are avid tennis fans and their four children play the sport.

“The opportunity to partner with someone so passionate about tennis and our community is a perfect fit,” said Moran.

The 2019 Volvo Car Open will take place March 30 – April 7. The tournament will continue to be operated by Charleston Tennis, LLC. Daily procedures and current staff will not be affected by the acquisition.