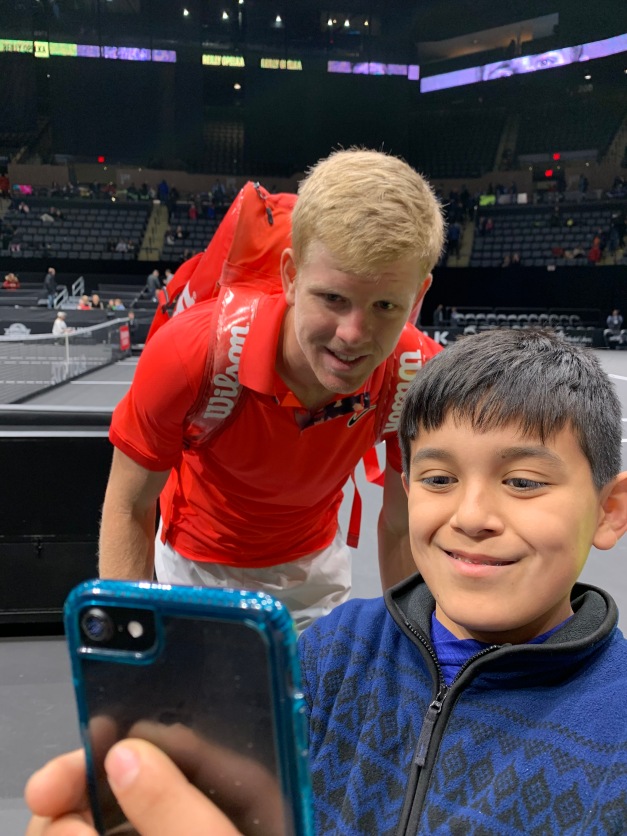 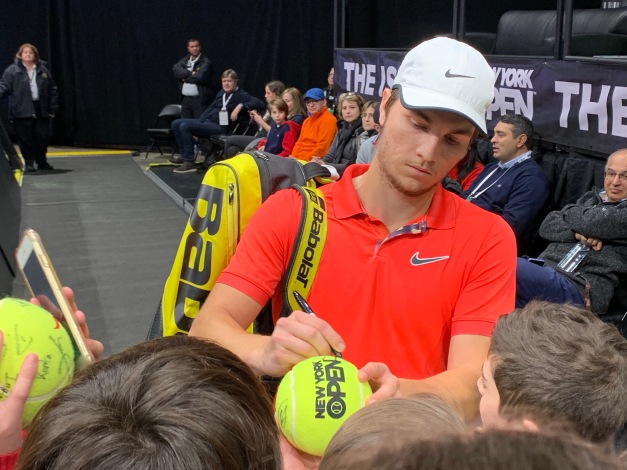 The wind kicked up and the cold came back to town in Uniondale, New York on Saturday for the New York Open. Inside the Coliseum, Ugo Humbert kicked up his service game and won a lopsided first set over Miomir Kecmanovic in the day’s first quarterfinal. Humbert won 94% of his first service points in the first set. Kecmanovic quickly regrouped and held the first game before breaking Humbert for the first time en route to the second set for the young Serb, 6-2.

It was hard to predict what was going to happen in the third set. Kecmanovic was flabbergasted by Humbert’s painting of the lines during the Frenchman’s service games. Kecmanovic lost a few close calls and after losing a challenge in the sixth game of the second set, he seemed to unravel, momentarily, and faced two break points. But he held.

In the eighth game of the final stanza, Humbert faced break point during his service. He held.

In the very next game, Kecmanovic found himself down 0-30.

Kecmanovic held from there and we all sensed a tiebreak was in order at that point.

We were wrong. Kecmanovic stunned his opponent by breaking Humbert at love to take the match, 3-6, 6-3, 6-4.

Last week, I made some pre-tournament predictions and sadly, the only quarter I got right was Kecmanovic to play Humbert. They’re both still under the radar to many American fans and were virtually unknown two years ago.

It’s Kecmanovic’s second semifinal of the new year (Doha) and only the third semis showing in his career. In our interview, he said he’d like to finish the season in the top 30.

As for Humbert, he’s already won his first ATP tour title at Auckland in January, so his year is off to a good start as well.

Kyle Edmund will take on Kecmanovic in tomorrow’s day semifinal.

Soonwoo Kwon and Edmund also saw one player get off to a fast start. Kwon was up 6-3 and Edmund answered back with a 6-2 second set. Both players were firing on all cylinders for the third set. Like the third set before it, it also felt like an inevitable tiebreak. And this time, for once, we’d be right. Tragically, the match ended on a Kwon double fault at 5-6. Kwon’s third set tiebreak record is an abysmal 36%. Overall, it was a decent run for the 22-year-old South Korean. 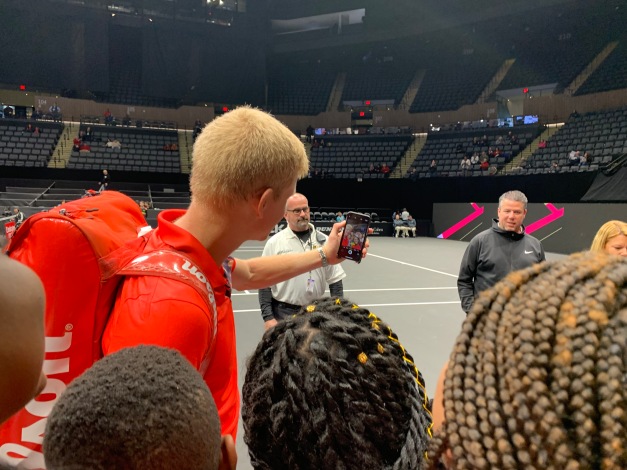 Tonight, we’ll see Reilly Opelka try to take a step closer to defending his only title, while Jason Jung and Jordan Thompson try to get closer to their first ever tour level finals.

A second day of rain did nothing but make you feel better about yourself for coming out to watch indoor tennis. And the weather outside did nothing to dampen the confidence of today’s winners. 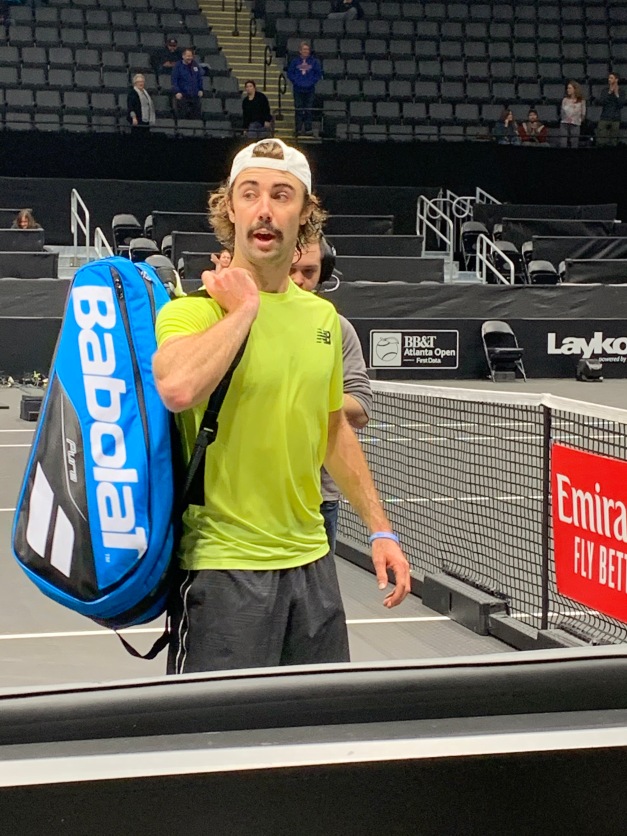 Jordan Thompson played Ivo Karlovic’s game and beat him at it in straight sets, 6-3, 7-6(2). While serving only 6 aces to Karlovic’s 11, the mustachioed Australian won an amazing 86% of his first service points and was never broken. From one big man to another, Thompson moves on to face American John Isner. 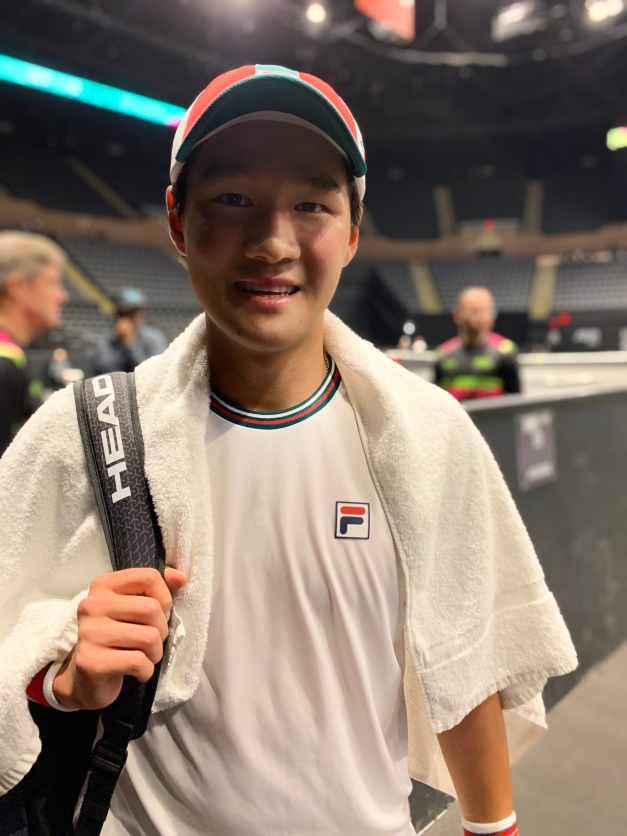 Soonwoo Kwon doused the hopes of qualifier Go Soeda, 6-2, 6-7(2), 6-3, after Soeda snuck up and took the second set tiebreak. Kwon nailed six aces in the third set after only four aces in the first two stanzas. Kwon’s service game will next have to match up against the tournament’s #2 seed Milos Raonic.

Paolo Lorenzi pulled a Pure Houdini today. He was down a set and a break to World #159 Danilo Petrovic, the lowest ranked player in the main draw. Petrovic, who was two games away from winning his first ATP Tour main draw match, disputed a call in the 8th game and continued to argue through the break and into the third set, where he was destroyed by Lorenzi, 6-0. Someone on twitter accused him of match-fixing, but I saw a guy out there who desperately wanted to win his first (at 28 years old) and he simply unraveled. Lorenzi, a quarterfinalist last year, faces Kecmanovic for a chance to return to New York’s Elite Eight.

You know that one match that you see on an Order of Play and you say, “that’s my match?” Me too. Yesterday, that match was Kecmanovic-Paul. And it disappointed. Today was no different. Today’s “my match” was Dominik Koepfer and Brayden Schnur. Schnur, a finalist at last year’s New York Open, clearly had the weight of history on his racket. He could not deliver a repeat performance of his 2019 run, and although the chants of “Let’s go, Canada” were louder in the second set, they did little to raise his game. For his part, Koepfer was consistent throughout the 6-3, 6-4 win. Earlier, Kyle Edmund eased past Yasatuka Uchiyama and will play Dominik Koepfer in the second round. That’s all for me until the quarterfinals on Friday here at NYCB Live, home of the Nassau Coliseum. See you on Valentine’s Day from the Guy-land.

A Day for Ducks and Qualifiers

On a rainy Monday on Long Island, Noah Rubin left the New York Open with a scowl on his face after winning just 37% of the points in a qualifying final loss. His conqueror was the 38-year-young Paolo Lorenzi, who advanced to the main draw at the New Yorker’s expense, 6-3, 6-1. And Lorenzi’s smile was Rubin’s frown turned upside down. The Roman citizen never has a poker face and is easily the Steve Buscemi of tennis.

Jason Jung also dispatched Mitchell Kruger, 6-2, 6-4, at about the same time that Lorenzi finished off Rubin. Jung draws 2018 tournament champion Kevin Anderson in the main draw. 35-year-old Go Soeda destroyed Bernie Tomic in a stunning 39 minutes to take the third qualifying spot in the draw. Soeda’s first round opponent is Soonwoo Kwon. The last qualifying final, between Bradley Klahn and Danilo Petrovic, was a close affair for most of the first set before the Serb pulled away, 6-3, 6-2. Petrovic is the lowest ranked player (#159) to qualify for the main draw. He’ll square off against Old Roman Lorenzi in the first round. 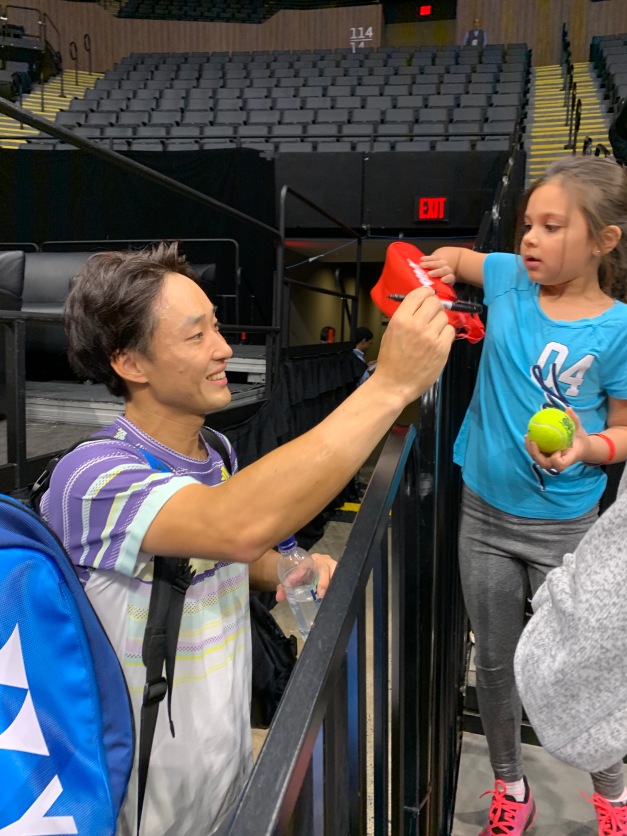 The players on the Grandstand Court are at the mercy of their noisy, partying neighbors next door on Stadium. At the commencement of today’s matches, the lights went down as Noah Rubin was introduced on the main court. That meant lights out for Jung and Krueger, who had unceremoniously already begun warm-ups. C’est la vie for them. 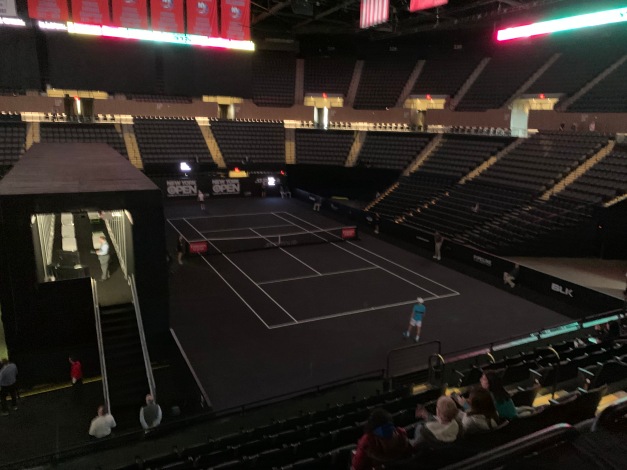 I cannot play in the dark.

The tournament has an impressive multi-media display system. The only problem is that without a lot of fans filling up the arena, it’s full of sound and fury, signifying nothing. On the other hand, there’s nothing like hearing the tossed coin hit the black courts from 300 feet away so loudly that you think that you dropped some change. 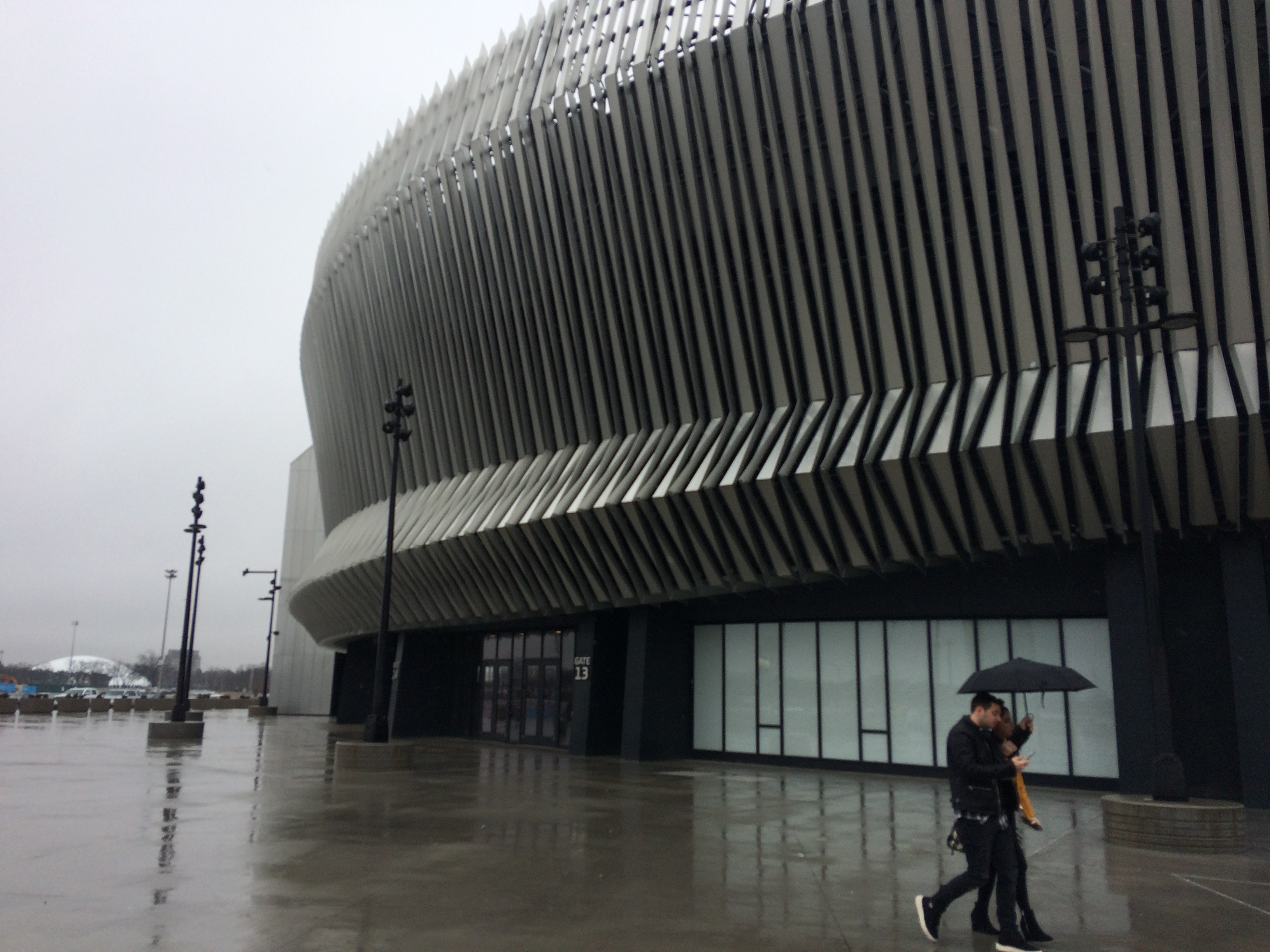 The New York Open is back for another year in the Coliseum in Hempstead, New York and we’re back as well at this ATP 250 tour event. A 250-level tournament is tricky for marketing purposes: just a couple of months ago, organizers were selling tickets for “Kei Nishikori Night” for Wednesday night’s matches. Then, Nishikori withdrew (as he just did in Delray Beach) and Nick Kyrgios became the celestial focus. Alas, he dropped out with a week to go, leaving it all to John Isner and the top Americans left to showcase. Let’s look at the draw.

Top seed John Isner is still looking for his first NY Open title in three tries. Like the other top 3 seeds, he’ll have a bye, meaning he need only win one match to reach the quarterfinals. He’ll face the winner of the Karlovic-Thompson match. There, I am taking Karlovic to avenge his Roland Garros loss to the Australian. In the quarters, Isner’s likely opponent will be 5 seed and fellow American Tennys Sandgren fresh off of yet another successful Australian Open run. Sandgren should ease past Steve Johnson in their first ever pro meeting on hard courts.

4 seed Ugo Humbert probably has the most intriguing section of the draw. After a bye, he’ll face the winner of Marcos Giron and one Jack Sock.  At this point, Sock’s level of play is anyone’s guess. Even if Humbert does advance to the quarterfinals, I don’t think he’s a lock to move on any further. That’s because some of the biggest momentum in this section comes from two players: Tommy Paul and Miomir Kecmanovic. I’m picking the Serb to win their first meeting today and to beat the qualifier he’ll face in the second round. It’s a shame that Paul and Kecmanovic were drawn to play each other in the first round, because these young guns are very dangerous, especially in a 250. Currently, Kecmanovic is the underdog at +125 despite being the seeded player in the match.

Milos Raonic, the 2 seed, also has to deal with a stacked quarter of his own. He starts play in the second round and Soonwoo Kwon will likely be his first opponent. Last year’s finalist is this year’s wildcard and Brayden Schnur would love to get back on track here in New York. Unfortunately, he’s drawn Dominik Koepfer in R1 in their first meeting and that match is going to be a tough out. However, with his 6-1 record on the black courts of the Coliseum, I would consider Schnur a value bet at +145. An all-Canadian quarter would be nice.

On a hunch, I think a Japanese player will advance to the second round, but I haven’t figured out which one yet. Yasutaka Uchiyama is a big first round underdog against Kyle Edmund. I will pick an upset of Yoshihito Nishioka today by Henri Laaksonen (+295). Or perhaps it will be top qualifying seed Go Soeda if he can get past Bernard Tomic today.

As always, this information is for amusement purposes only. And in just a few hours, the indoor main draw carnival begins.