When #1 seed Andy Murray was asked about his first impressions of Munich , the one thing that came to his mind were who many people visited the 2015 BMW Open on qualifying sunday. Indeed, the crowd attendance was quite high. In a QR2 match between 2013-semifinalist Daniel Brands and former top 10-player Radek Stepanek there were not enough seats and people even had to stand all around court 1 to watch the match.

The newly-wed Murray will play his first tournament as a husband. He named his marriage, as well as getting some matches under his belt, and trying to win his maiden tournament on the red dirt as the reasons to participate in his first ATP 250 on clay of his career. When asked about his form and playing on the clay in general, Murray underlined that he feels physically very well going into the claycourt season unlike the last years due to troubles in the back and he believes that he won´t have to change his playing style much compared to other surfaces.

In the following question Murray talked about the rankings, especially the Big 3 and even more so about Djokovic. Interestingly, if he had to choose, Murray would rather win a grand slam than reaching No.1 position in the world which seems more reasonable for him anyway since Djokovic looks like he´s going to keep this position for a long time.

After the press conference was finished most matches were finshed, too. The earlier mentioned Brands vs. Stepanek encounter went into a deciding tie-break with Stepanek winning it 8-6 after he gave his first mini-break away with a double fault at 5-3. On center court Dustin Brown came back from a 1-5 in the first set to win it in a tie-break. After Brown broke Stephan Heiss´ serve in the opening game of the second set, both players held their serve without much trouble. 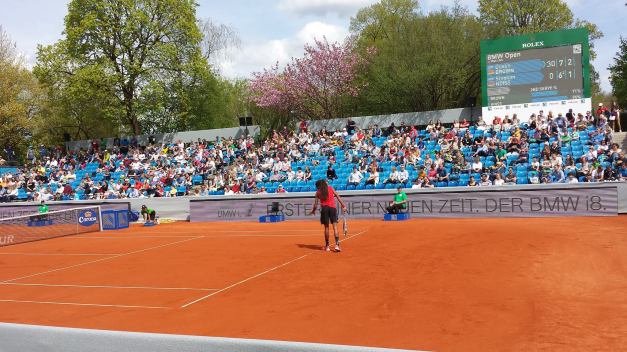 Today the final qualifying rounds are scheduled as well as the first main draw matches (Troicki vs. Estrella Burgos & more) and a press conference with the German No.1 Philipp Kohlschreiber.