Fabio Fognini and Hyeon Chung The Stars of @ChengduOpen 2018

Fabio Fognini and Hyeon Chung The Stars of the Chengdu Open for 2018
Steen Kirby, Tennis Atlantic

The ATP 250 in Chengdu, China kicks off the 2018 Asian swing on the ATP World Tour. Here is your look at all the action.

Top seed Fabio Fognini isn’t in great form but he should get past either Ruben Bemelmans, a qualifier, or Mischa Zverev in round 2. Fognini’s countryman Matteo Berrettini will be favored against qualifier Prajnesh Gunneswaran, while Matt Ebden should beat a struggling Evgeny Donskoy in round 1. I’ll back Ebden, who plays well in Asia, over Berrettini in round 2, then Fognini over Ebden in the quarterfinals.

A struggling Sam Querrey will try to find form against Guido Pella, while Taylor Fritz will be favored against Chun Hsin Tseng. Querrey faces Metz quarterfinalist Nikoloz Basilashvili in round 2, while Fritz will battle either Mikhail Kukushkin or countryman Tennys Sandgren. I’ll back Basilashvili to win the section against Fritz.

Joao Sousa faces Tim Smyczek as he looks to find form again, while Metz semifinalist Radu Albot will be favored against Vasek Pospisil. Adrian Mannarino is the favorite against the Marcos Baghdatis/Malek Jaziri winner in this section. Mannarino is in poor form though so I’ll back Jaziri to surprise and beat Baghdatis and Mannarino before falling to Albot.

Hyeon Chung will take on home favorite Ze Zhang or Yibing Wu in round 2, I’ll back Chung in that match and also against qualifier Bernard Tomic or 5 seed Gael Monfils in the quarters. Monfils just won a challenger title to find some form, and opens with qualifier Lloyd Harris, while Tomic, a qualifier, will face off with Bradley Klahn. Chung over Monfils is my pick for this section as Monfils should be fatigued.

It’s been a strong season for Fognini and he should reach another final, while Chung looks set to have a strong Asian swing. I’ll back him as the champion in this 250.

The ATP Asian swing kicks off this week with two ATP 250 level stops in China, here is your full previews with predictions. 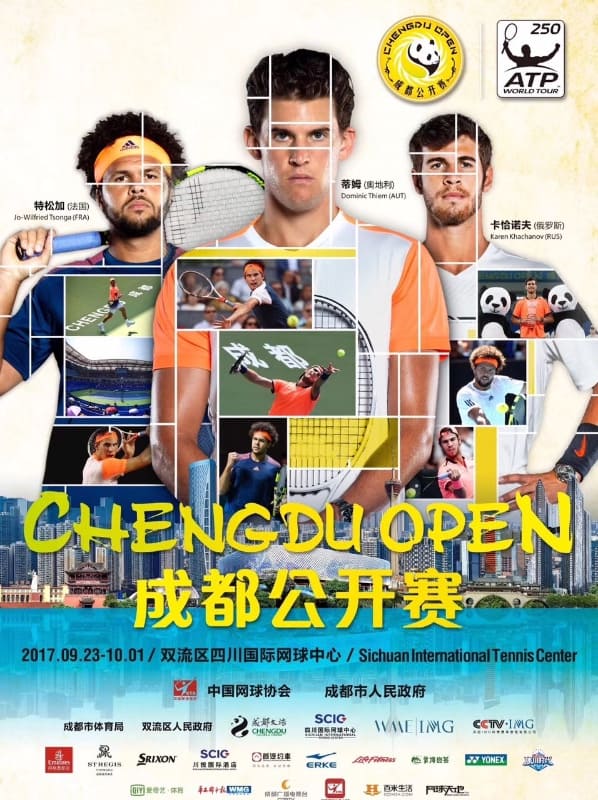 Dominic Thiem highlights the field in Chengdu, coming off the Laver Cup exo, Thiem should be tested by Borna Coric in round 2, and either Nikoloz Basilashvili or Viktor Troicki in the quarterfinals. Basilashvili reached the semis in Metz, and his promising form means he should push Thiem in the quarters, presuming the Austrian is fit, he should reach the semifinals.

Andrey Rublev and Metz champion Peter Gojowczyk look to be on a collision course for the quarterfinals. Rublev’s form should help him past Taiwan’s Rendy Lu, and either Gojowczyk or Leonardo Mayer in the quarters.

Japan’s Yuichi Sugita has had a career best year, Sugita should find his way past Albert Ramos or Dusan Lajovic in the quarterfinals and has a chance to be champion this week.

Kyle Edmund and Karen Khachanov could face off in the quarters, but the in-form Jan-Lennard Struff could disrupt the apple cart. Khachanov isn’t in the best of form, Struff should beat Denis Istomin and Khachanov. Edmund will line up opposite the struggling Bernard Tomic, Jared Donaldson or  Stefanos Tsitsipas will follow. Donaldson is dangerous, but presuming Edmund is fit he should have the edge all the way into the semis.

Thiem and Edmund should be favorites to reach the final, with Thiem a likely champion in this competitive tournament.

The Zverev brothers lead the Shenzhen field. Alexander, the top seed, opens with Davis Cup hero Steve Darcis or wild card Ze Zhang, Damir Dzumhur, the St. Petersburg champion, will face John Millman to open, I have Millman finding form and beating Lukas Lacko or Marcel Granollers after beating Dzumhur, and then falling to Zverev in the quarters.

Mischa Zverev opens with Dudi Sela or Matthew Ebden, Alexandr Dolgopolov should overcome his countryman Sergiy Stakhovsky, (and Lloyd Harris in the first round), I have Dolgopolov beating Zverev on account of Zverev not being 100% fit.

David Goffin should get past Evgeny Donskoy or Akira Santillan, with Donald Young or newly married Jeremy Chardy up in the quarters. Unless Goffin is in poor form he should be safe to reach the semis.

Joao Sousa is a strong favorite to emerge from his section, he opens with Henri Laaksonen, Marius Copil or Malek Jaziri will follow, with Paolo Lorenzi or Rogerio Dutra Silva likely in the quarters.

Alexander Zverev and David Goffin are the co-favorites to take home the title in Shenzhen, and I give the slightest edge to Zverev by virtue of his tremendous season.

A new ATP 250 event in Chengdu, China takes place this week, here is a look at the players taking part and their path forward as the ATP Asian swing kicks off.

Chengdu boasts a strong field featuring some popular second tier stars for the first ever run of this tournament.

Stepanek hasn’t faced Lu in 8 years, but he’s 2-0 in their h2h matches and has been on a great run of form in recent months. The Czech has qualified for three consecutive ATP events, and he also had a good showing at the US Open, although he’s played sparingly this season due to health concerns and age.

Lu, as usual, has performed well on the challenger tour, and is a steady hard court ball striker, though he lacks the weapons to do further damage. Stepanek’s attacking game should foil him a bit and I give the qualifier an edge.

Millman, who reached the semis in Winston-Salem, should defeat the dirtballer Lorenzi, but the veteran journeyman has had a career year and is 4-2 on hard courts in his last six matches. Lorenzi has never been a good hard court player, but he’s suddenly found form on the surface, and Millman should be careful to avoid being tripped up.

The 17 year old Ruud hopes to be the player to put Norway on the tennis map. Ruud is a full fledged pro now and won his first challenger in Seville, Spain on clay as a qualifier. He’s 4-2 on outdoor hard courts this year and peaked as the #2 junior in the world. He’ll make his ATP main draw debut against the experienced battler Troicki, who is a favorite in this matchup.

Troicki reached the semis in Winston-Salem and the quarterfinals in St. Petersburg, his good form should see him through to round 2. It will be a learning experience for Ruud, who is worth watching.

Both players are just inside the ATP’s top 40. Baghdatis is an accomplished hard court player who has put in his years on the ATP tour, while PCB is rapidly improving on the surface. Baghdatis reached the second week of the US Open while PCB took home a hard court title in Winston-Salem. Baghdatis is a slight favorite but I’m going with PCB because he’s been hot since the summer and should continue to rise.

Dominic Thiem reached the final in Metz but fatigue is a real concern for the Austrian, who continues to play a brutal schedule. He’s young, but he’s not super human and he’s already suffered fatigue induced injuries this year. Thiem opens with Konstantin Kravchuk or Di Wu, with the Lu/Stepanek winner likely in the quarters. I have Stepanek surging through to knock off Thiem after he beats Michael Berrer or Albert Ramos. Stepanek is a solid competitor with nothing to lose at this point in his career, and Thiem should be jetlagged. Kravchuk is usually on the challenger tour, and neither Ramos or Berrer are that great right now. Ramos was upset in St. Petersburg.

Grigor Dimitrov will be the favorite in the top half, the Bulgarian faces Dusan Lajovic or a struggling Federico Delbonis first up with Millman likely to follow in the quarters, presuming the Aussie battler defeats Lorenzi and Diego Schwartzman. With this type of draw Dimitrov should reach the semis after making the second week of the US Open in his last outing.

Nick Kyrgios faces Kevin Anderson or his countryman Jordan Thompson. Kyrgios is dangerous when healthy and focused, and he’s 34-13 on the season, having surpassed his 24 wins last season with a few tournaments yet to come. Anderson will be a tough opening match opponent, but Kyrgios is a big server like Anderson, and his superior return game should see him through. Troicki looks to be his likely quarterfinal opponent, after Ruud he’ll face Pablo Carreno Busta or Marcos Baghdatis. Both have shown good recent form, and with Carreno Busta having found a hard court game it won’t be easy for Troicki, but I still see it Kyrgios over Troicki in the quarters.

Feliciano Lopez opens with Juan Monaco in round 2. The Spaniard hasn’t had a great season but I still have him ousting Joao Sousa in the quarters, after Sousa bests Karen Khachanov and Adrian Mannarino or Denis Kudla. This seems like the type of 250 where Mannarino could get hot and reel off some wins, but his form is poor right now and thus Sousa should beat him in round 2.

Embed from Getty Images
A fatigued Thiem in the top portion of the draw sets Stepanek up to make at least the semifinals, and perhaps knock off Dimitrov to reach the finals. His serve and volley game is a true throwback you don’t see much on tour these days and his good recent form means he’ll be the favorite to make at least the quarterfinals.

Dimitrov and Kyrgios seem somewhat destined to reach the final here and that’d be great for the tournament organizers.

Kyrgios is the better player but Dimitrov needs this title more and I feel like he’ll get a much needed boost late in the season with this 250 trophy.