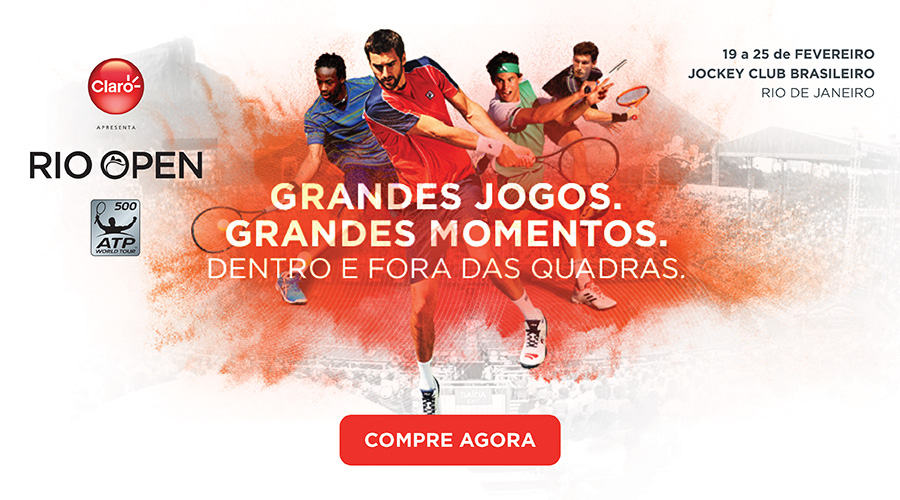 The Golden Swing on South American red clay has its marquee event this week, as it’s time for some tennis Brazilian style in Rio de Janeiro. It’s a 500 level event, and here is your preview, with predictions.

Compared to last week’s Rotterdam 500 Rio isn’t near as strong, but it’s still an improvement on the previous two weeks of 250 level stops on South American clay.

Nishikori has suffered three losses this season compared to nine wins, but it still seems like he’s underperforming his ranking. Even coming off a run to the final in Buenos Aires, it’s expected Kei will be able to defeat the big hitting home hero Bellucci, but the h2h is 1-1, Bellucci isn’t bad on clay, and he should be fresher. I’ll go with Nishikori to win, but I have Bellucci taking a set.

The aging Ferrer leads the h2h 8-3, but Dolgopolov comes off the title in Buenos Aires and has won two of their last three meetings. Ferrer has been in terrible form this season, posting just three wins, compared to three losses. The shotmaker Dolgopolov is erratic in his own way, having struggled for months before winning in Buenos Aires. Dolgo tends to struggle off of long, tiring weeks of tennis though, giving Ferrer an opportunity to kickstart his 2017 with a quality win.

After reaching the final in Buenos Aires, Nishikori will big once more for a title on South American clay. After taking on Bellucci in what should be a rowdy match, another Brazilian, Thiago Monteiro should follow. Monteiro opens with Gastao Elias after reaching the quarterfinals in BA. Nishikori is simply a better player than either Brazilian, his quarterfinal should be against Portugese #1 and BA quarterfinalist Joao Sousa. Sousa opens with qualifier Roberto Carballes Baena (2-1 h2h), with the winner of Casper Ruud and Brazil’s Rogerio Dutra Silva to follow. The young Ruud is talented enough to win in round 1 over the journeyman RDS, but Sousa should reach the quarters before falling to Nishikori just like what happened last week on clay in BA.

I have an all-Spanish  quarterfinal in the second part of the draw, Former Rio champion Ferrer will face either Carlos Berlocq or Horacio Zeballos in round 2 after battling Dolgo. Berlocq stunned Ferrer at home in BA, but the fan-favorite journeyman is 34, and after reaching the BA semifinals he should be fatigued. I have Ferrer getting revenge over Berlocq in round 2. Spain’s Pablo Carreno Busta should have another good week. PCB opens with Joao Souza and after semifinals in BA, he should reach at least the quarterfinals in Rio with a win over either Gerald Melzer or defending Rio finalist Guido Pella, who is struggling. Now a solid part of the ATP’s top 30, Carreno Busta should reach consecutive semifinals with a win over Ferrer.

45-13 on clay over the last two seasons, Austria’s Dominic Thiem is journeying over from Europe to take part in his first clay court tournament of 2017. Thiem reached the quarters in Rotterdam, but has performed below lofty expectations thus far. He’ll open with struggling veteran Janko Tipsarevic, another Serbian, Dusan Lajovic, should follow for Thiem, presuming Lajovic does away with a struggling Facundo Bagnis. Thiem’s first difficult match should come against Paolo Lorenzi/Federico Delbonis or Diego Schwartzman in the quarters. The Italian veteran Lorenzi opens with Federico Delbonis, Diego Schwartzman or Renzo Olivo will follow. The 35 year old Italian was a finalist in Quito, and although he’s struggled against Delbonis in recent matchups, I have him notching a slight upset and then falling to DSS, who isn’t playing poorly at all,  and should beat Olivo in round 1. Thiem should edge Schwartzman in the quarters.

Defending champion Pablo Cuevas isn’t playing his best tennis, but young qualifier Arthur De Greef likely hasn’t developed enough to beat him in round 1. Cuevas should then do away with qualifier Nicolas Kicker (or qualifier Marco Cecchinato). In the quarters Albert Ramos, 4-2 in his last two clay court tournaments, is likely to be on the other side of the net. Ramos opens with Stephane Robert, he’ll then face a veteran, either Fabio Fognini or Tommy Robredo in round 2. Robredo just  beat Fognini last week in BA, given he did so in straight sets, I have him winning for the second week in a row before falling to Ramos. Despite Cuevas 4-1 h2h edge over Ramos, Ramos is in better form and I have him reaching the semifinals.

I wouldn’t count an Argentine or Brazilian player to make a run this week, and Schwartzman is my dark horse pick. Lorenzi and Thiem are not easy early round opponents, but both are beatable, and Thiem may be fatigued. Schwartzman has shown he has a well-rounded game and can play his best tennis on clay, if he finds his groove he could make a mark this week like Berlocq and Dolgopolov did last week.

Nishikori has lost six straight ATP finals and badly needs to win one for his own confidence, he should edge past PCB. I have Ramos finding more success against a likely tired and vulnerable Thiem. Ramos won their only h2h match (on a hard court), which should give the Spaniard confidence.

Nishikori has lost on clay to Ramos before, but he’s won more often than not in this matchup. and as mentioned, badly needs an ATP title.

The South American golden clay court swing continues on with a 500 level stop in Rio, Brazil, the highlight tournament of this swing.

Three top 10 players in Rio in the third year of this tournament.

Dolgopolov has two previous hard court wins over Bellucci, and the Brazilian will look to bite him back on home clay. Bellucci was a finalist on clay in Quito, and he should be the favorite, though the Ukrainian is a talented shotmaker and a previous finalist (2014).

Jack Sock oped to play South American clay, like John Isner, this season, rather than early North American hard courts, and he’ll open with a tough match against Federico Delbonis. Sock has an ATP final already this season while Delbonis upset Fabio Fognini in Buenos Aires last week. Delbonis is a challenging clay court opponent, but Sock is good enough on the surface to advance.

Rafael Nadal, a former champion, suffered another surprising loss, this time in Buenos Aires to Dominic Thiem in the semifinals. Nadal remains a great clay court player, but he’s losing his elite status and shine slowly but surely. His opening match will be against Pablo Carreno Busta, a Quito quarterfinalist, and then he’s likely to face Buenos Aires finalist Nicolas Almagro in round 2. Almagro posted his best result in months in Argentina, and opens with Daniel Munoz-De La Nava, a journeyman. Nadal should advance into the quarters given Almagro’s fatigue, though he has beaten Rafa on clay before.

Bellucci/Dolgopolov will face Inigo Cervantes or qualifier Taro Daniel in round 2. Daniel is likely to win his opening match, but Bellucci is the quarterfinal favorite. Nadal is 5-0 against Bellucci an is the favorite to reach the semifinals unless his struggles continue.

Jo-Wilfried Tsonga lost in the Buenos Aires quarters, and will face wild card Thiago Montero, a recent challenger semifinalist, in his first match. Fellow BA quarterfinalist Pablo Cuevas faces qualifier Facundo Bagnis. Cuevas has a clay court h2h win over Tsonga, and could earn another one, but Tsonga is the quarterfinal favorite. Sock/Delbonis will face Marco Cecchinato or Paolo Lorenzi in round 2. Lorenzi is in the form of his career, and is 9-3 in his last 12 matches. I have him upsetting Sock to reach the  quarterfinals and face off with Tsonga, who he could also defeat as a dark horse.

Buenos Aires semifinalist, and defending champion David Ferrer opens with a struggling Nicolas Jarry. BA quarterfinalist Dusan Lajovic, or Quito semifinalist Albert Ramos await him in round 2. Ferrer should be able to defeat Ramos and reach the quarters given his 5-0 h2h.

BA champion Dominic Thiem is on a hot streak, and he’ll open with Pablo Andujar. Andujar has lost four straight matches, and Thiem is likely to go up against Diego Schwartzman in round 2. Schwartzman opens with Joao Souza. Even with the fatigue factor, Thiem is a favorite to reach the quarterfinals. Ferrer should have an edge against Thiem at that stage given that fatigue factor. Both Ferrer and Thiem are in great form to start the season.

John Isner lost his opening clay court match of the season, but he’s a favorite against a struggling Guido Pella in round 1. Santiago Giraldo or Gastao Elias will be his round 2 opponent, Elias has been rising as of late, but Isner has a great shot at the quarterfinals. Both Fabio Fognini and his round 1 opponent Aljaz Bedene are on losing streaks, Fognini leads the h2h 5-0 though, and either Juan Monaco, or qualifier Daniel Gimeno-Traver await in round 2, Monaco won his first back from injury in Buenos Aires. Fognini vs. Isner would be an interesting quarterfinal and it’s a tough pick between them. On clay Fognini is probably a slight favorite.

Jo-Wilfried Tsonga is the top seed most likely to lose early, and Lorenzi could benefit. His strong recent play on clay gives him an upset shot against Sock, and likewise against Tsonga/Cuevas. Another ATP semifinal would further extend the best few weeks of the Italian veteran’s ATP career.

Ferrer is 9-0 in the h2h against Fognini, Nadal lost to Tsonga last year on hard courts, but he’s 2-0 on clay in the h2h, and 8-4 overall. It’s hard to predict Nadal these days, but he’s still the favorite to capture the title.

Nadal’s 24-6 h2h against Ferrer speaks for itself, though Ferrer has his best shot in years to knock off Rafa.