WHITE PLAINS, N.Y., January 9, 2019 – The USTA today announced that former world No. 7 and Davis Cup veteran Mardy Fish has been named the new captain of the U.S. Davis Cup Team. He succeeds Jim Courier to become the 41st captain in the team’s 120-year history and will make his debut at the newly transformed Davis Cup by BNP Paribas Finals November 18-24 in Madrid, Spain.

“Ever since I started playing professionally and started understanding what the Davis Cup was and how special it was, even as a player, I wanted to be the Davis Cup Captain,” Fish said. “I just thought that position was so special – leading the guys and leading the team, building relationships and the team aspect around it. I’m a team-sport athlete stuck in an individual sport, and I love the team aspect of Davis Cup. To even be considered, let alone named the Captain, is incredibly humbling.”

In this new era of Davis Cup, the role of Captain will be expanded, with the position working more closely with USTA Player Development throughout the year, as well as traveling to multiple tournaments and camps to support American players, serving as a mentor for American pros and juniors. He will also ensure the U.S. Davis Cup team remains a strong platform to grow the game through the USTA’s Net Generation youth initiative. 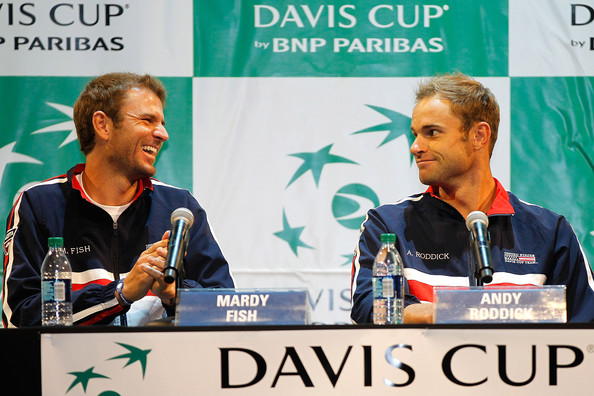 “Mardy Fish embodies all of the qualities of a successful Davis Cup Captain and will be an invaluable asset to Team USA,” said USTA Chairman of the Board and President Patrick Galbraith. “His achievements as a player both on tour and in Davis Cup are renowned, and his acumen for the game is as strong as his relationships with our American players. There are few people in tennis as qualified to lead the U.S. Davis Cup Team into the next decade, and we cannot wait to see what that future has in store under Mardy’s leadership.”

Fish, 37, reached the singles quarterfinals at three of the four Grand Slams and won a combined 14 ATP titles (six singles, eight doubles) before retiring from playing at the 2015 US Open. He also produced a number of signature performances while representing his country, earning the singles silver medal at the 2004 Athens Olympics and writing his name in the U.S. Davis Cup record book.

Fish played in 11 Davis Cup ties for the U.S. from 2002-12 and is still the last U.S. Davis Cup player to win three live matches in a single tie, in a 3-1 World Group Playoff win in Colombia in 2010 that kept alive the U.S.’s now-record uninterrupted streak in the World Group. Fish’s two singles victories in that tie were five-setters, and he and Courier are the only U.S. Davis Cup players to win two five-set matches in the same tie. In his last Davis Cup playing appearance, Fish beat Stan Wawrinka in five sets and teamed with Mike Bryan to beat Wawrinka and Roger Federer in a 5-0 sweep of Switzerland in the 2012 First Round.

After retiring in 2015, Fish worked part-time as a coach with USTA Player Development, helping to guide young Americans on tour, including Taylor Fritz and Jared Donaldson, through 2017.

In a joint announcement, the USTA and Mary Joe Fernandez, one of the longest-serving Fed Cup Captains in U.S. tennis history, today announced that after eight years of leadership, Fernandez will step down from her role as U.S. Fed Cup Captain. With this change in leadership, the role of Fed Cup captain will now include working very closely with USTA Player Development. The search for a new captain will begin immediately with the goal that a new captain will be named by the end of November.

“We greatly appreciate all that Mary Joe brought to the U.S. Fed Cup Team, including reaching two finals,” said USTA Chairman of the Board and President Katrina Adams.  “She is highly regarded by all of the players, and has brought unparalleled experience and insight to the role. She will be missed.”

“Working with the players has been one of the most rewarding experiences of my career,” said Fernandez. “I have been proud to represent the USA in this role. My only regret is we did not bring home the cup during my tenure as Captain. While the changes planned for the captain role are not a fit with my other work and family demands at this time, I plan to do my part to ensure a smooth transition to a new captain once selected, and continue to contribute where I can to the success of the USA Fed Cup Team.”

The U.S. Fed Cup Team will compete at home (location to be determined) against Germany on February 11-12, 2017.