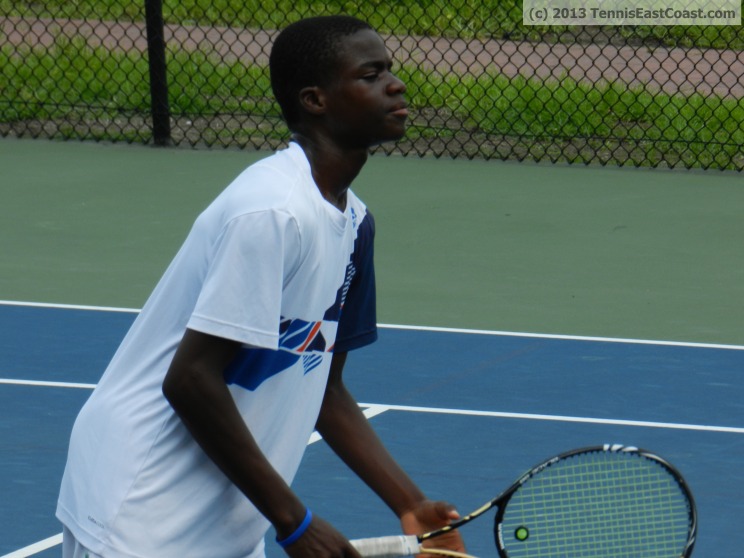 Frank Tiafoe of the JTCC

“It is an honor to host the International Tennis Federation and the USTA Hard Court Championship,” said Ray Benton, chief executive officer of the Junior Tennis Champions Center at College Park. “In just its second year, the tournament is already a must-play for junior tennis players. With its designation as a Grade 1 tournament, this year’s championship will attract top junior talent. We are thrilled to be chosen by the ITF and USTA to host this event.”

“The USTA is pleased that the USTA Hard Court Championship is returning to the Junior Tennis Champions Center – this year as an International Tennis Federation Grade 1 tournament. The field was strong in 2012 and will likely be stronger this year,” said Lew Brewer the director of junior competition for the USTA. “The facility is outstanding and the staff at the JTCC do a great job making the players feel special. We think the tournament has found a great home at the JTCC in College Park and we hope to keep the tournament here for many years to come.”

The upgrade to a Grade 1 event makes the JTCC one of only three ITF Grade 1 tournaments within the United States, the other two being the Easter Bowl in Palm Springs, Calif. and the Orange Bowl in Bradenton, Fla. The Junior Tennis Champions Center hosted the inaugural International Hard Court Championship (Grade 2) last year when Jamie Loeb won the girls singles and Wayne Montgomery won the boys singles.

The Junior Tennis Champions Center (JTCC) a 501(c)(3) organization, is a world-class training facility located at The Tennis Center at College Park. Its goal is to provide the athletic and academic instruction needed for talented and highly committed young people to excel both on the tennis court and in the classroom. Since its inception in 1999, JTCC has placed all 95 of its graduates at top universities, with graduates earning more than $1.6 million in athletic scholarships.

The Junior Tennis Champions Center: It’s Not Just for Kids

Alison Riske is no longer a junior player. But she liked what she saw so much at the Junior Tennis Champions Center in College Park, Maryland, that she moved here from Hilton Head to join her coach, Yves Boulais, who had also relocated to Maryland.

It’s one of the finest tennis training facilities in America, and it’s just starting to get some real attention. As JTCC graduate Denis Kudla has moved up the rankings, so has the word on the street about the JTCC.

Riske joined Justin Boulais, her coach’s son, who also trains at the facility. The Center has one of the only red clay courts in the Mid-Atlantic, and plenty of Har-Tru and U.S. Open style hard courts.

The results of her decision to move to Maryland five months ago paid off handsomely. She hit a career high of 96 last week after bottoming out around #200 as late as March.

One of the JTCC’s feature players, Arlington, Virginia’s Denis Kudla had a very nice summer tour and reached a career-high of 90 in July.

Kudla trained at the Center since childhood. Though Kudla lost his first round match at Citi Open, he spent lots of time around the grounds, running into  old friends and chatting with DC area juniors, who admire him greatly.

The involvement of JTCC alum in the tournament was extensive and the best part of the Citi Open for many Washington-area locals. In addition to Riske and Kudla in main draw singles play last  week, 14-year-old Usue Arconada, a prodigy of JTCC Coach Frank Salazar, was the toast of the tournament’s opening weekend when she won her first professional match. Arconada beat the #2 Argentinian in qualifying. As you can see from the video below, she’s got natural poise on-camera as well as on-court.

It was also a huge treat to see JTCC alum Beatrice Capra, a Maryland native who now plays for Duke University. A qualifying wild card recipient, she didn’t make the main draw but still played tenaciously in front of a packed house of local supporters on Grandstand 2.

In addition to the large crop of players at the Citi Open, JTCC will host the second annual International Tennis Federation (ITF) Grade 1 Junior International Hard Court Championships from August 17-24. This is the first time ever that JTCC will host a Grade 1 tournament and is one of only three ITF Grade 1 tournaments in the United States with other tournaments held in Palm Springs and Miami.

The Grade 1 tournament will feature the top ITF 64-ranked boys and girls to compete in singles and doubles, bringing some of the best young tennis talent in the world to the area, including Arconada and JTCC’s Francis Tiafoe.