Jeff Wilson is an accomplished coach who has done a lot for former Georgia Tech Yellow Jacket and Tennis East Coast  favorite Irina Falconi. Less than a week ago, he took veteran South African player Chanelle Scheepers under his wing as well.

The most striking part of the interview is how much Irina has changed over the last year. Though she may sound ebulliently youthful on her WTA blog, The Eyes of Irina, she has grown so much since last summer at the Inaugural CitiOpen at College Park. The eyes of the world were on her at the US Open and she’s become an all-around veteran at managing media. Here’s Jeff and Irina on focus, training and Scheepers.

It seems like you learn so much in the first two sets with your new doubles partner that by the time you get to the superbreaker, it’s already over.

My partner and I definitely come out aggressive and know what our intention is. We know our game plan in the third set. We like to play under pressure a little bit, when it’s time to get down to the nitty-gritty.

What about that crazy scoreline against Melanie Oudin where you two got bageled in the first set, then went on to win 10-1 in the breaker?

Honestly, I think they came out firing and we weren’t full gear and ready to go just yet. Once we got Jeff out there, he told us the game plan. It was just a matter of executing.

Have you learned a thing or two from your veteran partner Scheepers?

Very much so. Not only on the court but off the court, what she does with her food, fitness and stretching, she’s taught me all that.

Jeff, you’ve been coaching Chanelle Scheepers for how long now?

I’m going to Montreal, hopefully take a week off, then Dallas and the US Open.

What changes have you made since I last saw you in Charleston, Coach?

Irina’s been on the road straight since mid-April. She was in Europe for 11 weeks with out a break, so we haven’t had much time to invest. We’re looking for some pockets in the schedule so we can rest her body. It will be a good opportunity to give her body a break. She’s extremely healthy because of the way she takes care of her body. The way she stretches, the way she prepares, the way she eats. We haven’t been able to invest in changes per se, other than the usual clay court to grass, and grass to hard court mentality. We’re looking forward to giving her a bit of a breather from having to wake up and doing all that.

Irina, All that blogging. How do you do it?

Your blogging has proved that you have a future in communications. Do you see yourself as a commentator some day?

For sure. I could definitely do that.

I’ve definitely experienced the heat. We”re staying at an absolutely great hotel. It’s difficult with the time being so late with the matches, but I’ve loved it so far.

How’d you like that rooftop bar at the old Hotel Washington downtown?

Isn’t the summer heat just as bad in Washington as it is in Atlanta?

JW: Hotlanta is called Hotlanta for a reason.

Top seed Anastasia Pavlyuchenkova easily advanced to the CitiOpen semifinals in Washington this week. It’s the first time in a while that things have been so easy for the 21-year-old Russian. In a post-match press conference on Thursday night after defeating Kai-Chen Chang, she didn’t hold back on her early season disappointments. She also made it clear that she’s back on form.

Can you tell me about beating Chang today in straight sets after a big comeback in the first set?

I had a slow start today, and it was really tough conditions, very humid. It wasn’t my best match today at all. Chang got a bit of confidence after winning those first few games. I kept on going and trying to find my energy. I’m happy to pull through.

Last year at this time, you were poised to crack the top 10. A year later, you seem to be on an upward trajectory again.

It was a really good year last year. It was a really bad start this year. I didn’t feel good at all and I lost a bit of confidence. I was struggling with my shoulder issue. I missed the Olympics. It made me stronger, so now I have a different mentality overall and I think I am more focused and playing better.

Sad Pavs  has left the building. (This is actually her google bio photo. Google her if you don’t believe me.)

Are you ready to defend your success at the US Open after making the quarterfinals last year?

I don’t think about defending points and I don’t try to focus on last year’s results. I have nothing to lose. Nothing can be worse than the beginning of this year. I’m happy that I’m coming back. I did let myself down after my results recently this year. I’m trying to play better than last year. Who knows, maybe I’ll do even better at this year’s US Open.

Are you satisfied with your performance at CitiOpen thus far?

I’m quite happy with my performance here, even compared to a few weeks before when I played on clay. Maybe I’m just more aggressive here. I treasure and I’m happy with every win. The game was always there. I’m motivated to do well here, and so far it’s going pretty good. 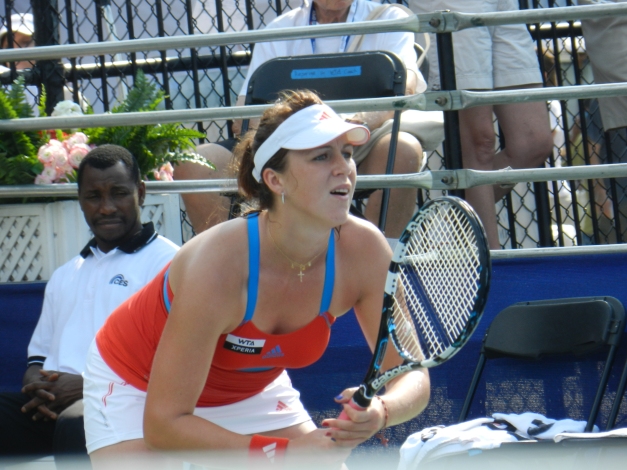 Any chance to enjoy the sights of D.C.?

Not too much. It’s really hot, so I want to spend as much time as possible inside a building. We’re staying close to the White House, so I kind of looked around. Unfortunately, I missed the tour of the White House yesterday because I was playing. 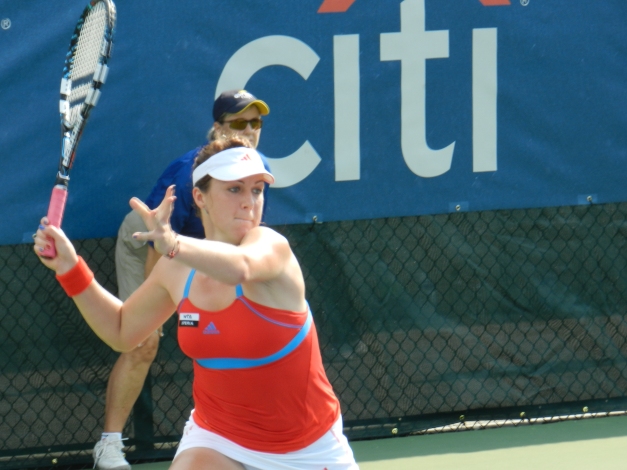 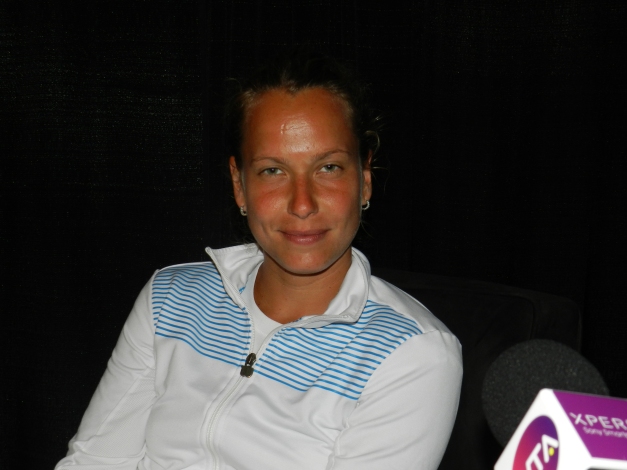 Barbora Zahlavova-Strycova, a doubles specialist with 17 doubles titles, is a lion on the court. She’ll also try to defend her only singles title at Quebec City after the US Open. After watching her argue calls with the Chair while banging her racquet against the metal net post in a first round singles loss to Edina Gallovits-Hall at CitiOpen on Monday, I wasn’t even sure I’d get an interview with her. Not only did I get an interview, I got the serene, happy off-court version of the woman tennis fanatics call BZS.

You had 76% of your first serves as winners in the second set. What happened in the third?

Really? It didn’t feel like it! I wasn’t playing so good the whole match. I was really tight. I was not playing my best. The third set was so fast to Love-2. I played pretty good, but she passed me at the net. I didn’t really believe that I can pull it through.

She’s a tricky player. She puts every ball in the court and you have to be really focused and you have to play really aggressive. That’s what I was trying to do, but if you don’t believe that you can do it, it’s tough to win the matches. 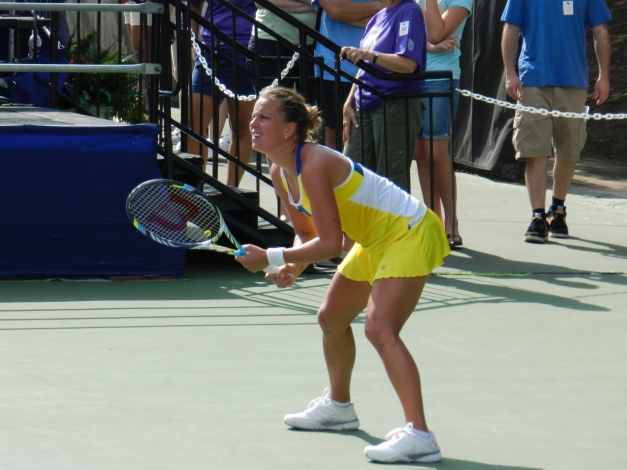 Your doubles partner, Iveta Benesova, is also in singles in DC. Why aren’t you two playing in doubles?

We’re not playing because we’re playing in Montreal next week in qualies. We don’t want to miss the qualies. We were thinking if we play doubles (here), maybe we could go through!  That’s why we aren’t playing here.

What do you think of Washington, despite losing your match to a member of the Washington Kastles?

I was thinking about it. It doesn’t feel like I’m in the States. It’s feels so clean. It reminds me of Europe a lot. It’s nice! I didn’t see much, but I went to the White House. The White House looks so small. On pictures, it looks really big, but if you go there and you see it, it’s small.

I interviewed Andrea Hlavackova recently and she talked about your shared home town of Plzen. What are your thoughts on Plzen?

Well, we grew up together. Her father is the one who is tasting the beer and sending it into the world. I love my hometown. It’s a small city and everybody knows each other. I grew up there and I think I’m going to stay there for the rest of my life.

How neat is it to be able to see Pilsner Urquell, your hometown’s famous beer, where ever you are in the world?

Like the pop quiz I gave to Andrea Hlavackova in Charleston, do you know the four ingredients in beer?

Yeah, but I don’t know the words in English!

I’m sure you’re looking forward to the U.S. Open, having made the doubles quarterfinals there last year.

I’m looking forward, but I still have more tournaments to go before the US Open.

I love New York. My favorite city. I would live there, but we’ll see! I’m going to focus on my singles first.

Montreal, Dallas, Flushing Meadows and Quebec are the next stops on Barbora’s North American summer tour. 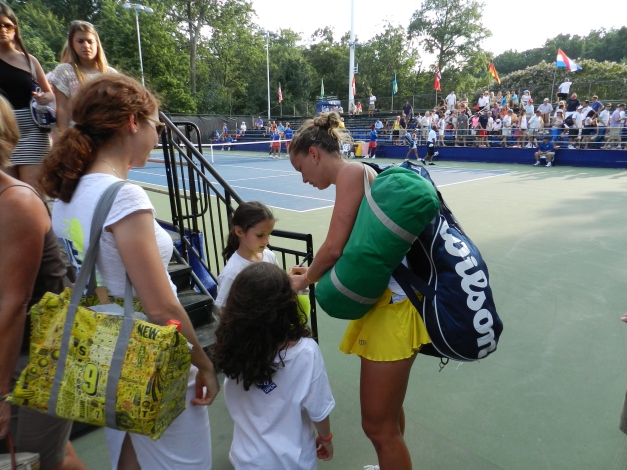