Ryan Harrison qualified for the main draw at Citi Open today, and became the only ATP American man to do so. Harrison upended Mischa Zverev 6-3, 7-6(3). 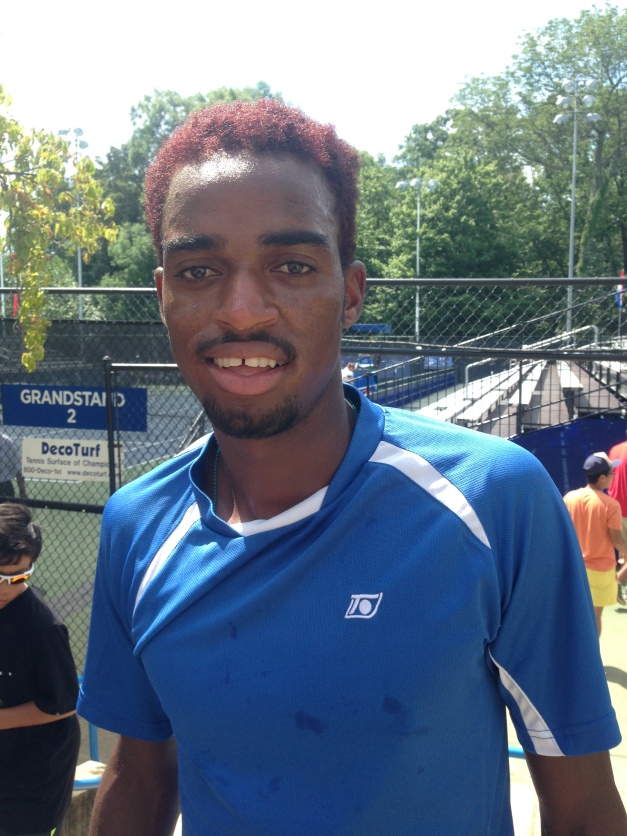 Darian King, you’re from Barbados? It’s always been close enough for us! King, who I last saw in Charlottesville (where he was defaulted for not hitting a linesman with his racket toss), played a solid match against Ze Zhang, taking the match back into his own hands each time Zhang attempted to pull ahead.

In the last match of the day, American Sanaz Marand pulled a rabbit out of her hat in outlasting #2 qualifying seed Elizaveta Kulichkova 7-6(9), 7-6(6).

The Belarussian you expected in the main draw (Vika) couldn’t make it, but An-Sophie Mestach was happy to become the second Belgian there as she advanced to the main draw at Citi Open with a sound thrashing of Tamira Paszek. Does that make any sense? As for expectations as the top seed in qualifying, Mestach said “the last couple of tournaments I’ve played, I’ve been the first seed. It doesn’t make a difference. Tamira Paszek, she’s been injured but she’s coming back. I knew it wasn’t going to be an easy match.”

Naomi Broady is such an amazing person. She has put up with too much, having been both an early adopter and early victim of social media. England’s Lawn Tennis Association tried to pretend like she didn’t exist, but indeed she does. She spoke with me today about the challenges of going it alone when your national association turns their back on you for something that wouldn’t even register today on the internet. Don’t even get me started about those national associations, USTA. Oh, and yes, Broady qualified big time for Citi Open, beating Aliaksandra Sasnovich 3&3 today. 24 aces and straight sets on the weekend. Take that, you stodgy posh toffs at the LTA. She got on without you. Imagine that. 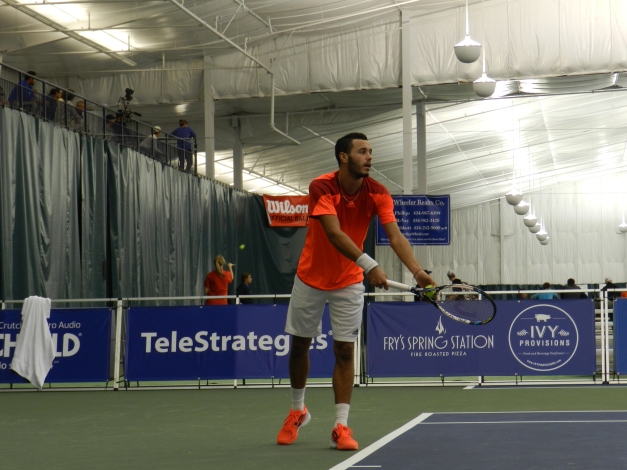 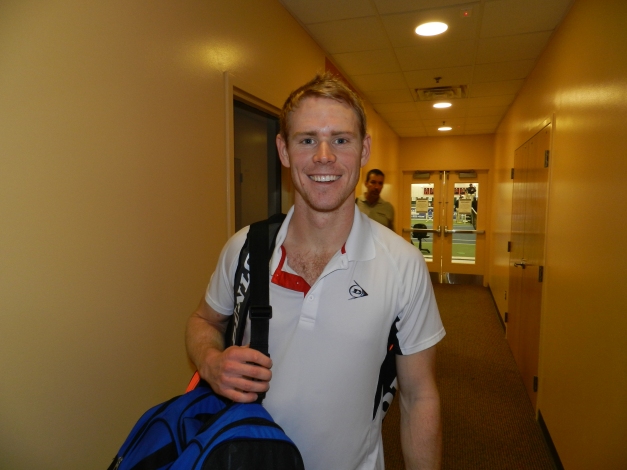 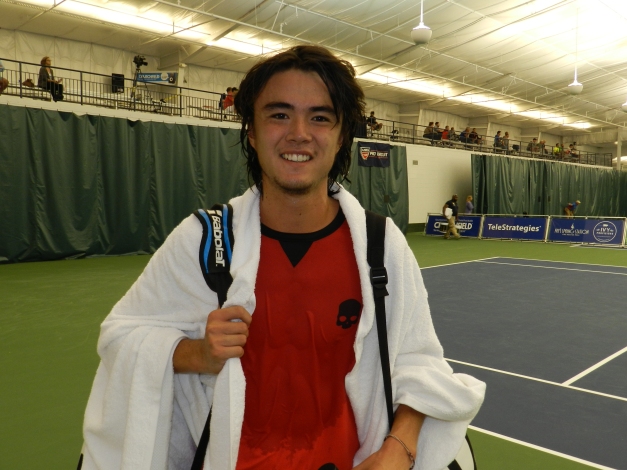 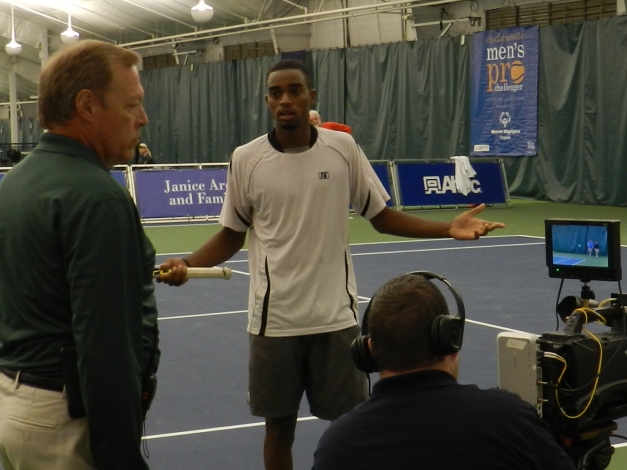 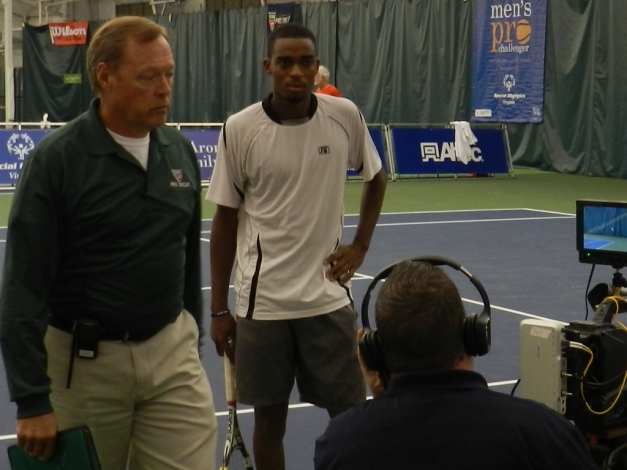 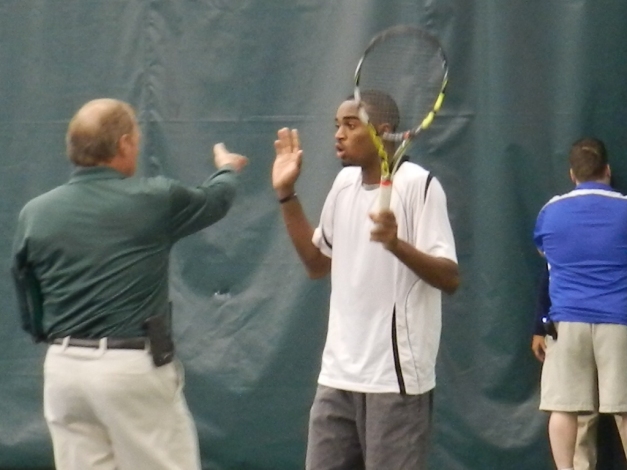 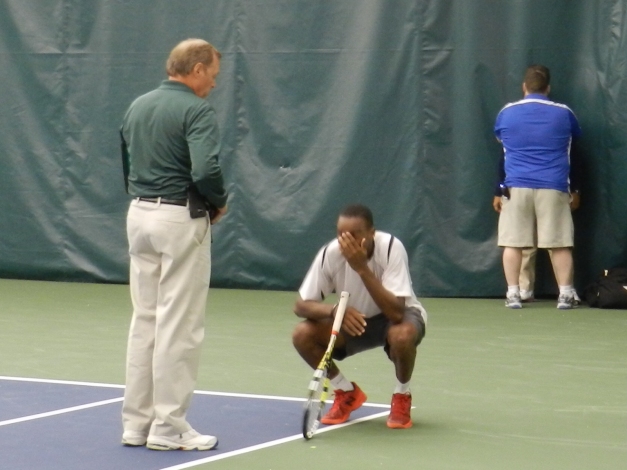 Edward Corrie won a first-round match today at the Charlottesville Men’s Pro Tennis Challenger at the Boar’s Head Resort, but in most peculiar fashion. After taking the first set, 6-3, from Darian King of Barbados, Corrie shook off a break and took King to a second set tiebreak. King, who had been animated and argumentative throughout, lost a point at 2-5 in the breaker. Disgusted, he very aggressively tossed his racket behind him toward the curtain. What happened next is a bit of a mystery. It needn’t have been, but it was.

The sound caused by the racket hitting the curtain was very loud and echoed throughout the cavernous indoor facility. As all eyes turned to the sight of the boom, the linesman behind King fell over and let out a cry. I raced over to Court 7, where King grabbed his racket and quickly left the scene of the accident. He went to the net and told a curious Corrie, “She’s fine”. He stayed at the net for several minutes, apparently ready to keep playing. The linesman remained down for at least five minutes. The longer she remained on the ground, King told anyone who would listen that “I didn’t hit her”. Finally, Challenger Supervisor Keith Crossland came over and told King that he would likely be defaulted for his negligence. King appealed and asked to go to the match video. Crossland initially allowed this request, and I thought for a minute that he might go “under the hood” like an NFL referee. King was upset that the camera operator could not pull up a replay, and Crossland said, “Maybe we’ll watch it later”. As King stormed off to the locker room, he continued his Not Guilty plea.

“I did not hit her!”, he proclaimed, as he disappeared into the toilet-and-shower sanctuary.

One twitter user who was watching the feed said that King’s racket hit her in the neck. After speaking with several onlookers, the consensus was that the racket hit the linesman on the ricochet off of the curtain. Tournament officials indicated that they believed the linesman would be alright. Still, what a loveless job.

I mentioned that it needn’t have been a mystery. Last year, I was aggressively forbidden to shoot a point at this same Challenger by Keith Crossland, due to “video rights”. Yeah, right. Like anyone watches this stuff except us tennis junkies. So I comply. I can’t find a link anywhere online to show you what happened. If I had been allowed to shoot video, you know I would have had it on youtube within the hour. And the mystery would’ve been solved before dinner. Way to go, Crossland!

UPDATE: Our own Chris De Waard just sent me a youtube link from someone who stole the feed. Maybe Crossland should go after him for being such a terrible scofflaw. Thanks to that scofflaw, you can now judge for yourself. 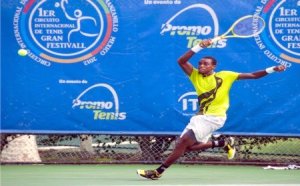 CALABASAS, Calif., (March 12, 2013) – Down 4-2 after splitting sets with former USC All-American and hometown favorite Prakash Amritraj, Darian King knew he had to change his game-plan and start playing more aggressively.

That’s exactly what the 20-year-old Barbados Davis Cup player did as he held his serve, broke the 29-year-old Amritraj, and then won another service game at love to record a 6-4, 2-6, 7-5 victory and a spot in the second round of the USTA Men’s Pro Tennis Championships of Calabasas, a $15,000 USTA Pro Circuit event, played on Tuesday at the Calabasas Tennis & Swim Center.

“I just kept my intensity up but knew I had to play better,” King said after the match. “I practiced with Prakash all last week so we know each other’s game.”

King said he loved playing in “his kind of weather” on a gorgeous 78-degree Southern California day. A year and a half ago, King advanced to the Claremont $10,000 Pro Circuit final losing to Steve Johnson in the final. “I just love it here,” said King, who was watched by his coach Roger Smith on Tuesday. “I’m still training in Florida with Martin Blackman, but when I’m out here it’s great to have Roger working with me.”

King is the No. 1 Davis Cup player for a country that is one-fourth the size of Ventura County where the tournament is taking place. “We have about 200,000 people there,” said King, whose country will next play Puerto Rico in a Group II Americas Relegation Playoff and is currently ranked No. 64 in the world Davis Cup standings. “It does feel good to be the No. 1 player from somewhere though.”

On Wednesday night, former world No. 9 player Nicolas Massu of Chile will take on Matheson Klein of Australia not before 6:30 p.m., in his first-round match. Now 33-years-old, Massu made it all the way to No. 9 in the world rankings during his successful career and is a two-time Olympic gold medalist.

In 2004, Massu became the only male player to win both the singles and doubles gold medals during the same Olympic Games. Massu also reached the final of the 2003 Madrid Masters and won six ATP singles titles.

“I can’t recall a Top 10 player ever coming back to play at this level ($15,000),” said longtime USTA Pro Circuit Tour Supervisor Pete Kasavage.

Admission is free to the general public until Friday. Beginning then through the finals on Sunday, tickets will be $10 for adults and kids under 14-and-under free.