A couple of years back, I jokingly called Jack Sock an Atlanta rock star due to the reception he received there at the US Open Wildcard Playoffs after his US Open Mixed Doubles title with Melanie Oudin.

That was nothing compared to the way he and partner Vasek Pospisil have been received this summer in Newport, Atlanta & Washington after taking the Wimbledon title earlier this month.

I spoke with them and I didn’t mince words. These guys are busy.

Individually, they’re both respected in singles and loved by the fans in their home countries.

‘PopSock’ has moved up the rankings to #7 in the world and hope to qualify for the ATP year-end championships.

They’re committed to playing together throughout the summer and hopefully all the way to the 2014 ATP World Tour Finals title.

I hope the North American Dynamic Doubles Duo take this show all the way to the title in London.

And I, for one, welcome our new Doubles Overlords.

WASHINGTON—On the heels of their Wimbledon triumph, Vasek Pospisil and Jack Sock reunite as a team and join World No. 1 Mike and Bob Bryan in the world-class doubles field at the Citi Open® tournament. Main draw play begins July 28 at the William H.G. Fitzgerald Tennis Center in Rock Creek Park. 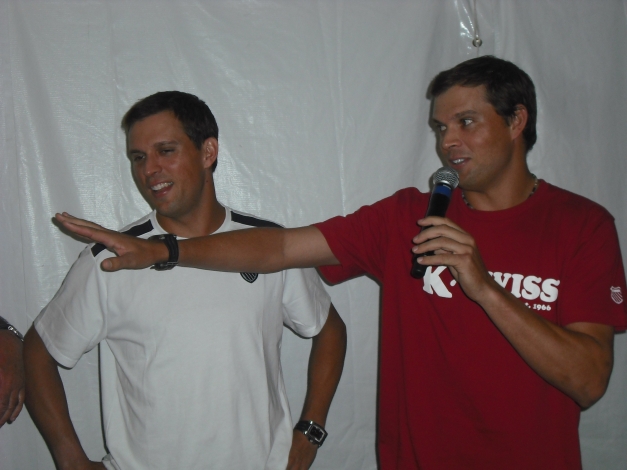 Eight of the top ten doubles players in the ATP World Tour are scheduled to compete. In addition to the Bryans, the teams of Alexander Peya (No. 3) and Bruno Soares (No. 3), Daniel Nestor (No. 5) and Nenad Zimonjic (No. 6), and Marcelo Melo (No. 7) and Ivan Dodig (No. 10) round out the top ten. Julien Benneteau, who captured the Citi Open title in 2013 with Zimonjic, partners with Michael Llodra, while 2012 Citi Open champs Treat Huey and Dominic Inglot will vie to reclaim the crown. 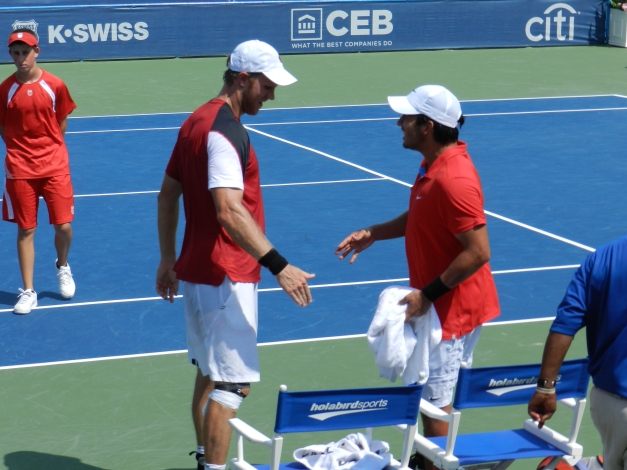 The Bryans are looking to win their unprecedented 99th career team win in Washington, where they’ve held the doubles title three times. During the 2013 season, the 36-year-old American twins completed a Golden Slam—they won the gold in the 2012 London Olympics followed by all four Grand Slam titles in a row. Together, the Bryans have won a record 15 Grand Slam titles. Also in 2013, the Bryans finished as the No. 1 team for a record 9th time in 11 years.

The Canadian-American duo of Pospisil and Sock, who have never competed together until the London Grand Slam, accepted a wild card into the main draw. Pospisil and Sock upset defending Wimbledon champions Bryans in a five-set match to claim their first Grand Slam title. 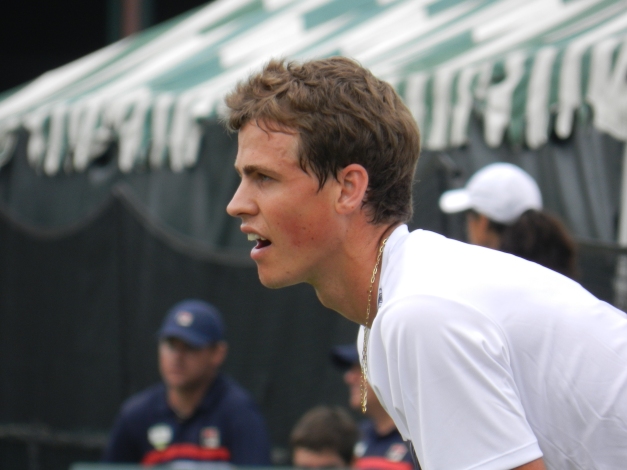 The Citi Open® Tournament is one of only 11 elite ATP World Tour 500-level events worldwide and the only one held in the United States. The event is also part of the prestigious Emirates Airline US Open Series, the five-week summer tennis season that links eight North American hard-court tournaments to the final Grand Slam of the year, the US Open. In addition, the Citi Open® Tournament features a WTA International Tournament. The tournament’s owner and beneficiary, the Washington Tennis & Education Foundation (WTEF), provides underserved children in the D.C. area with a safe environment to learn critical life skills both on and off the courts through academic and athletic enrichment.

Ticket pricing and package details plus a full listing of the men’s player field is now available at http://www.citiopentennis.com, or by phone at 202-721-9500. Daily and single session tickets are now available through Ticketmaster. The tournament box office for walk-up sales opens starting Saturday, July 26, at 8 a.m. at the Fitzgerald Tennis Center.

For more information, visit the Citi Open® Tournament on the web at http://www.citiopentennis.com.

Harrison and Russell both look to bag trophies again, this time with different partners

Atlanta–July 21, 2013: The headlining Bryans were forced to withdraw, but the doubles field is still quite strong in Atlanta. Here’s a look.

The top doubles seeds are Wimbledon finalists Ivan Dodig/Marcelo Melo, and they get the Harrison brothers in the opening round. Ryan Harrison took home the doubles title here last year (with Matt Ebden). Below them in the draw are the well known Israeli duo of Jonathan Erlich/Andy Ram against the pairing of Rendy Lu/Marinko Matosevic.

Bogota doubles finalists Edouard Roger-Vasselin/Igor Sijsling are seeded 4th, and face GA Tech duo Kevin King/Juan Spir, with the winner getting Denis Kudla/Michael Russell or Ricardas Berankis/Santiago Giraldo in the next round. Russell was a doubles finalist last year (with Xavier Malisse).

James Blake/Jack Sock face Marcelo Demoliner/Andre Sa in a USA vs. Brazil matchup, with the winner getting Evgeny Donskoy/Denis Istomin or 3 seeds Colin Fleming/Jonathan Marray in the next round.

Rajeev Ram/Ken Skupski will face Dominic Inglot/Frank Moser with the winner getting Chris Guccione/Lleyton Hewitt or Santiago Gonzalez/Scott Lipsky in the next round.

Milwaukee’s Tim Smyczek is a pretty quiet guy, but he wears some pretty loud and distinctive looking gear from Athletic DNA on court.

The Seattle-based apparel company has picked up some of the hardest working players in the business as their brand ambassadors–guys like Brian Baker, Rajeev Ram and Tennys Sandgren. Smyczek was a perfect addition to that list. Athletic DNA even gives their brand ambassadors a small share in the company, something that would have made Nike, Adidas, Fila and Under Armour sponsored players billionaires by now.

He shares his thought on the affiliation in a brief interview. I guess my daughter, Annabel, was inspired by the Hewitt kids getting so much attention in Newport, because she just had to get in the scene.

Smyczek and Rhyne Williams have been waiting for two days now to find out who’ll they’ll face in this afternoon’s doubles final at the Hall of Fame Championships. They’ll have to wait a little longer. The semis match of Mahut/Roger-Vasselin vs. Sa/Demoliner was pushed back until after the men’s final, since Mahut advanced to the singles final. It’s a tailor-made scouting opportunity for Smyczek, Williams and their coaches this afternoon.

The Men’s doubles draw is out for Memphis and headlining it, of course, are the number 1 ranked Bryan Brothers who will open with Robert Farah and Tommy Haas. The winners may run into a showdown with another accomplished doubles team, David Marrero and Fernando Verdasco, who open with doubles specialists Santiago Gonzalez and Scott Lipsky.

4 seeds Alexander Peya and Bruno Soares, both of whom are very accomplished in doubles themselves, will play the Harrison brothers. UVA’s Treat Huey and Domic Inglot will take on Eric Butorac and Paul Hanley.

3 seeds Daniel Nestor (the Canadian legend who was part of the championship pairing last year) and Lukasz Kubot will take on Quisner (John Isner and Sam Querrey). Team Quisner made the semis last year in Memphis and lost to Nestor. Florian Mayer and Juan Sebastian Cabal will take on good friends Jurgen Melzer and Philipp Petzschner.

2 seeds Horia Tecau and Max Mirnyi (the other part of the championship doubles pairing last year) will take on wild cards James Blake and Jack Sock, a team that mixes one of the old faces of American tennis with one of the new ones.

Last but not least, Marin Cilic and Andre Sa will take on Ivan Dodig and Marcelo Melo in what will be a rematch of their 1stround singles encounter for Cilic and Dodig and a battle of countrymen for both teams. Dodig and Cilic are Croatian and Melo and Sa are Brazilian. The other irony is that Dodig and Melo made the final last year, yet this year they will be on opposite teams.

Rock singer Gavin Rossdale of the band “Bush”, former ATP touring pros Rick Leach, Jeff Tarango and the USC men’s team joined Mike and Bob in the annual event presented by Alexander Cadillac. Even the Olympic gold medal the twins won in London this past summer made an appearance and was passed around for all to view and hold.

“We so appreciate the fans coming out to support our Foundation and the Tennis Fest,” Bob Bryan said.

Added Mike: “It was so great to see the crowd having such a good time, enjoying the tennis, the food and drinks and the music. We love putting on the Tennis Fest and plan to do it again next year.”

Both the Ventura County Junior Tennis Association and the Santa Barbara Tennis Patrons are the major beneficiaries of the event, as well as other local causes and regional charities supported by the Bryan Bros. Foundation.

“Bob and Mike always take time from their crazy schedule to host their Foundation event and give back to so many area kid’s charities in need of funding,” said Tennis Fest organizer Dave McKinney.

In the celebrity exhibition, Rossdale joined the Bryan Brothers and former American Idol performer Michael Johns. Later in the day, the Bryan Bros. Band entertained the crowd with a concert.

McKinney reported that the Pro-Am was won by Harold Edwards with Ron Weckbacher a finalist. More than 45 area restaurants and wineries participated in the event.

For more information on the Bryan Bros. Foundation, see the website at: http://www.bryanbros.com/about-the-foundation.html.