The 2015 doubles field for the BB&T Atlanta Open is truly world class, as some of the best doubles teams in the world have entered this ATP 250 event. Atlanta tennis fans and recreational players love doubles, and clearly this high quality field is their reward for appreciating a lesser-recognized part of the pro game.

That starts of course with the Bryan Brothers, the greatest doubles team of all time and the #1 seeds. They haven’t had as strong of a season this year as previous ones but they still have three ATP titles (including the Miami and Monte Carlo Masters), and reached the Roland Garros final. The brotherly pair is now well past 30, but they continue to compete at the highest level and set records. In round 1 they will face the Aussie pairing of Sam Groth and Chris Guccione.

The lanky Gooch, and the big serving Groth are both likeable guys and Groth’s massive serve aids his double game. Groth recently helped Australia win their Davis Cup tie with a doubles win while Gooch has one ATP doubles title this year.

The winner of the Bryans vs. the Aussies will take on either Treat Huey/Steve Johnson or Fabrice Martin/Purav Raja. Huey is a doubles specialist and former University of Virgina product, while Martin/Raja are a full time professional doubles pairing, Johnson of course a singles player looking to get som practice in. From this section it’s likely the Bryans will win both their matches to reach the semifinals.

The #4 seed is the pairing of Mate Pavic/Michael Venus. Venus is a former LSU product from New Zealand who has gravitated towards being a doubles specialist while the tall Pavic, just 22, has been in great form as of late on the doubles circuit. They come off of the final in Bogota as a pairing, and Pavic reached the Newport final prior to that, Venus/Pavic also won the title in Nice on clay back in the spring. Pavic/Venus will face local favorites Donald Young/Christopher Eubanks in the opening round, Eubanks from Georgia Tech, and Young of course an Atlanta native.

The winner of Pavic/Venus vs. Eubanks/Young could face doubles specialists Marcus Daniell (another New Zealander)/Marcelo Demoliner or Americans Nick Monroe/Austin Krajicek. The veteran Monroe has reached two ATP doubles finals this year (Bucharest and Newport), and the American team should be slight favorites to advance on home soil, while Pavic/Venus are the favorites in the section. Krajicek has shown clear interested in excelling in both doubles and singles as the rising American is in the top 130 in singles, and the top 80 in doubles.

Pospisil/Sock in bottom half as #2 seeds, Fish/Roddick to say farewell

The fan favorite and talented pairing of Vasek Pospisil/Jack Sock, who were in the top 5 in the world in doubles as recently as April (4 titles together including Wimbledon and Atlanta in 2014 and Indian Wells in 2015) are back together again and playing in Atlanta as the #2 seeds. They tend to perform at their best on North American hard courts, as evidenced by their back to back finals in Indian Wells and Miami this year, and the title in Indian Wells, as Sock was returning from hip surgery, and both have been on the rise in singles as well (Pospisil making a run at Wimbledon and Sock generally having a solid season including his first ATP title).

“Popsock” will open with Gilles Muller/Colin Fleming in a tough round 1 match as they seek to defend their title. Muller is a big server who enjoys playing in Atlanta, while Fleming is a veteran Scottish doubles specialist though he’s struggled this year besides one ATP doubles final. It’s likely the young North Americans will get through though and setup a meeting with either Benjamin Becker/Lukas Lacko or Marcos Baghdatis/Malek Jaziri. Both are singles players who are playing doubles this time, and Baghdatis/Jaziri are a pair of talented veteran shotmakers. Regardless of who wins that, Pospisil/Sock should be favorites to at least reach the semis.

The #3 seeds are the veteran pairing of Artem Sitak/Eric Butorac, Sitak, the third Kiwi in the draw reached a career high this year in doubles at #39 in the world. He’s transitioned to a doubles specialist and appears to be succeeding at it, with an ATP title and two finals this year. Butorac is 34 and a long term doubles specialist, he’s struggled this season though and Matt Ebden/Adrian Mannarino will have their chances in the opening round. Ebden has had success in Atlanta in doubles before while Mannarino’s funky game is good for the discipline, they both focus on singles but it’s an open draw if they catch fire.

One of the two teams remaining to discuss are Jonathan Marray/Rendy Lu with the doubles specialist and former Wimbledon doubles champ Marray coming off of a title in Newport. Previously Lu and Marray took the title in Chennai at the start of the season. Last but certainly not least are the very popular farewell pairing of Andy Roddick/Mardy Fish.

Roddick came out of retirement only to play ATP doubles, as a special favor to his good friend Fish, and Fish is of course on his farewell tour during the Emirates Airlines US Open Series this summer, in both singles and doubles. Given their rust, it’s hard to tell how well they will play, but they will certainly have a good time and treat fans to some exciting matches for as long as they last.

All in all it promises to be an exciting doubles tournament in Atlanta, and the matches are absolutely worth checking out as we should be treated to some great semifinals and perhaps a star studded final in Atlanta.

Kudla a Cool customer in Delray, Joins Dolgopolov & Karlovic in Round 2 @DelrayBeachOpen

American Denis Kudla continued his solid start to 2015, with a round 1 win in Delray Beach over Slovak Lukas Lacko 6-3 6-4. From the start of the match Kudla looked energetic and confident. He quickly won the first set with solid and consistent strokes, mixing in quality serving to take Lacko off guard. Kudla’s cool calm and collective nature seemed to frustrate Lacko, causing him to rack up unforced errors as he overhit on his shots and went for too much when fed a steady diet of clean returns and defensive slices by Kudla. Both players had to deal with tough weather conditions, primarily strong winds and a bright sunshine that disrupted the players field of vision at times, Kudla managed to stay composed and ahead in the sets, which resulted in a comfortable victory for the American. Lacko only broke Kudla once in the match, in set 2, which was slightly more competitive, and Kudla saved 6 of 7 break point chances he faced, in the end the match was over in just over 1 hour.

#3 seed Alex Dolgopolov joined Kudla with a winning start, Dolgo faced a relatively stern test from Russian veteran Teymuraz Gabashvili, but prevailed in an hour and a half 7-6(4) 6-3. Dolgopolov, was, as to be expected given his playstyle, the more aggressive competitor in this one, while Gabashvili’s skillset was limited to baseline defense and rallying. Dolgopolov generated more break point chances (8) and won nearly twice as many return points as Gabashvili did on the Dolgopolov serve. In this contest, Dolgo’s form varied, but after saving break point chances in set 2, after taking the first set tiebreak, Dolgopolov broke Gabashvili himself and then held onto his serve the rest of the way to finish off the match.

Ivo Karlovic won the late match, over fellow big server Dustin Brown. Karlovic, rather astoundingly continued his record of having never won a tiebreak against the German (0-4 in tiebreaks in all of their matches put together), but still won anyway 6-3 6-7(3) 6-2. Brown’s form was rather disappointing given the 2-0 h2h record going into the match in his favor. He got broken early in set 1, which as one knows, almost always results in Karlovic winning the set when he gets a break, and though he hung around in set 2, and then read Karlovic’s serve well in that tiebreak, in set 3 he looked emotionally fatigued out there, broken and then comfortably dispatched. Karlovic put up 23 aces and won nearly 80% of his service points, in a match where both players came to net on at least half the points.

Men’s singles qualifying also concluded today in Delray on the outer courts, JP Smith beat American vet Robby Ginepri 3-6 6-3 6-0, American Eric Quigley upset another veteran competitor, Victor Hanescu, in a 3 set battle 6-3 5-7 6-4. Quigley, will be I believe, making his ATP main draw debut in Delray Beach, having qualified for his maiden ATP event. Thanasi Kokkinakis also qualified in the most straightforward fashion of all the competitors, beating Alex Kuznetsov 6-1 6-3. Last but not least, Yoshito Nishioka beat Sekou Bangoura 7-6 6-4 for the final qualifying spot. Nishioka, who is primed to rise at a young age, is also making his ATP main draw debut this week.

When it comes to qualifier placement in the main draw, Smith was placed against top seed Kevin Anderson, Quigley was placed against 5 seed Adrian Mannarino, Kokkinakis will play Filip Krajinovic in a great  chance for him to reach round 2, and Nishioka will face Igor Sijsling of The Netherlands for his maiden ATP main draw match.

Many of the main draw players including Sam Querrey, and Andrey Rublev were out in force on the practice courts today, and I’ll be back later in the week to cover some of the later round action at the 2015 Delray Beach Open. 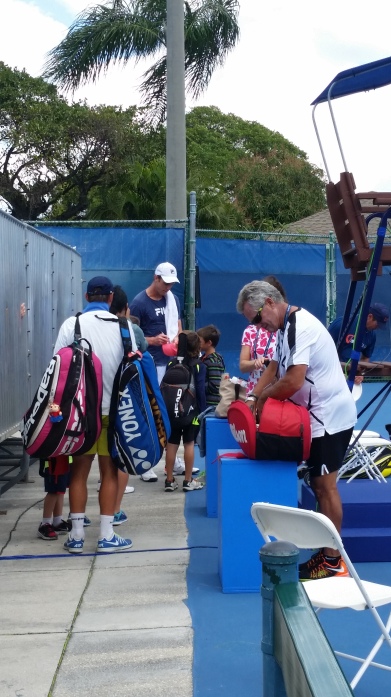