I’ve seen her in tennis club cafeterias at ITF events and witnessed her trying to qualify for bigger tournaments countless times throughout the United States, but I saw Jessica Pegula do something different today: make the final of a WTA international level tournament. She did so by defeating the qualifier Anna Kalinskaya, 6-3, 3-6, 6-1 in a Citi Open Women’s Semifinal in Washington.

The first set was all Pegula, and Kalinskaya required a medical timeout to deal with cramping before holding her own through the second and pushing the third set. There was nothing left in Kalinskaya’s tank at that point and Pegula took the finale in a breezy 6-1 affair. 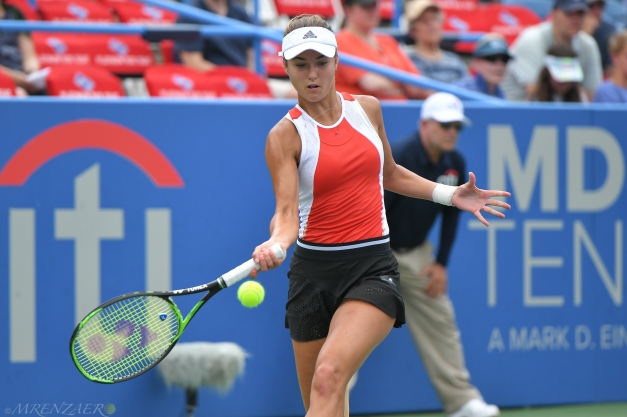 Tour level success has been elusive for Pegula thus far for the 25-year-old Buffalo, New York native. Since turning pro in 2013, she’s only enjoyed one such final appearance: on the carpet in Quebec last year where she fell to Pauline Parmentier. She’s a rich girl, and she’s gone too far, storming all the way into the vaunted final of the Citi Open, where the likes of Magdalena Rybarikova, Sloane Stephens and Svetlana Kuznetsova have won glory, if not household notoriety.

Looking ahead to tomorrow, Pegula has a 2-1 head to head record against Camila Giorgi, but the two haven’t met in match play in seven years. She’s 1-1 against Caty McNally, having beaten then 16-year-old McNally on clay last year in Tampa in straight sets before losing to now 17-year-old McNally in straight sets on the hard courts of Midland, Texas.

It was the best of times. It was the worst times. Maybe it was a little of both, depending on how qualifying at the US Open turned out for you or your favorite player. But for me, it was a great time watching 2010 finalist Vera Zvonareva face sudden death a couple of times today to pull herself through a tough three set match against Lin Zhu to qualify for the main draw, 6-2, 4-6, 7-5 win in 2 hours and 43 minutes. It wasn’t the prettiest tennis Zvonareva has played, saving 5 of 9 break point opportunities, but it was enough to get back to the main draw.

After the match and right before trotting off to the Tennis Channel, I asked her how special it was to do it the hard way.

“Well of course it’s very important,” she told me. “I’ve been playing on the big stages before, but now I had to go through the qualifying. You know, when I started last year, I won in the first round but lost in the second round of qualifying. So I was happy to come back here again and thought ‘well, I’ll give it another try’ and of course, I’m very happy to be in the main draw now.”

If the fans on Court 4 today were any indication, there’s a lot people very happy she’s in the main draw.

Mariana Duque-Marino made it four straight matches without dropping a set at the 2018 Boyd Tinsley Women’s Clay Court Classic in Charlottesville, Virginia with a 6-4, 6-2 victory over American Jennifer Brady. Both players came out tentatively, and Duque-Marino even gave up a break on a

double-fault before settling down to take the first set and the match.  “I think I did a lot of double faults because she was pressuring me with her forehand,” she told me after the match. “So if I didn’t put the first serve on the court, I would have to run–a lot. That’s why I was trying to force the second serve a little bit,” she continued. “My forehand was very good and with my slice, very happy today.”

Duque-Marino will put her 8 set win streak on the line tomorrow against either Taylor Townsend or Anhelina Kalinina of Ukraine. Townsend beat Duque-Marino in 3 sets last week in the Dothan final. I pointed out the Boar’s Head trophy, which stood nearby and asked if she’d like to take the glass and metal violin trophy home with her tomorrow.

“It’s different. I never had one of those ones, but tomorrow I hope to play the same like the matches before.” she said with a smile.

The No. 2 seed, Kozlov advanced to his first Grand Slam junior singles final and became the first American boy to reach the singles final at a junior Grand Slam since Bjorn Fratangelo won the French Open boys’ title in 2011. Donald Young (2005) and Andy Roddick (2000) are the only Americans to win the Australian Open boys’ singles championship. Taylor Townsend won the girls’ singles title in 2012.

Kozlov, who trains with both his father, Andrei, and USTA National Coach Nicolas Todero out of the USTA Training Center – Headquarters in Boca Raton, Fla., projects to ascend to No. 2 in the world junior rankings for all players ages 18 and under. Three American boys, who were born within a month of one another in 1998, are currently ranked in the Top 10 – Kozlov, 2013 Metropolia Orange Bowl champion Francis Tiafoe (No. 7) and Michael Mmoh (No. 8), who teamed with Kozlov to reach the doubles quarterfinals and advanced to the second round in singles in Melbourne.

“This is an exciting and well-deserved achievement for Stefan,” said Patrick McEnroe, General Manager of USTA Player Development. “We are incredibly proud and are happy for him, his family and the team in Boca.”

Kozlov, who turns 16 on February 1, had beaten the 16-year old Zverev, the reigning ITF World Junior Champion, in their previous three meetings, each in the last six months. In December, Kozlov defeated the 6-foot-5 German in the semifinals of the Orange Bowl, setting up the historic final between 15-year old Americans, won by Tiafoe, of College Park, Md.

In the Australian Open girls’ singles draw, 16-year old Olivia Hauger, of Tulsa, Okla., reached the quarterfinals, upending No. 1 seed Varvara Flink, of Russia, in the second round.