The ATP 250 tournament in Sao Paulo, Brazil concludes the clay court golden swing in South America. A host of South American dirtballers will be joined by Gael Monfils, Fabio Fognini, and Albert Ramos in the hunt for an ATP title. 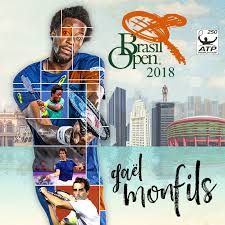 Top seed Albert Ramos-Vinolas has not had a great golden swing and really needs to get past Thiago Monteiro (or Guilherme Clezar) in the second round. Monteiro has had some unlucky results lately, and likely loses round 2 to Ramos. Chile’s Nicolas Jarry reached semis in Rio and has had a solid golden swing. He should keep it up against Dusan Lajovic, then defeat Guido Pella or Corentin Moutet in round 2. I’ll back Jarry over Ramos in the quarters given Jarry just beat Ramos in Rio.

Gael Monfils has posted 2 quarters and a semi in his golden swing efforts. He’ll open with Thomaz Bellucci or Horacio Zeballos. Presuming Monfils wins that and reaches the quarters he’ll face either Rogerio Dutra Silva or Nicolas Kicker. Kicker opens with a fading Victor Estrella, Dutra Silva faces Tennys Sandgren. I’ll back Monfils over both Brazilians (Bellucci and RDS) to reach the semis.

Fabio Fognini reached semis in Rio and should get past Renzo Olivo/Joao Domingues in his first match. Federico Delbonis should follow in the quarters. Delbonis faces a potentially unfit Roberto Carballes Baena in round 1. Gerald Melzer or veteran Guillermo Garcia-Lopez will follow. Fognini vs. Delbonis could decide the tournament champion in the quarters. I’ll go with Fognini to reach the semis.

Pablo Cuevas is playing well enough that he should defeat Marco Cecchinato/Sebastian Ofner, then Leonardo Mayer in the quarters. Mayer opens with Gastao Elias, Carlos Berlocq/Thiago Wild will follow.

Gael Monfils and Fabio Fognini aren’t the only possible champions in SP, but they should be co-favorites. Monfils has played the whole golden swing and should walk away with at least one title.