Team GB was going to have two chances to advance to the Davis Cup quarterfinals in Sunday singles action, and their leader Andy Murray ensured they only needed one to get the job done. Murray went head to head with the Japanese #1 Kei Nishikori in a nearly five hour thriller in Birmingham, and came away the victory to secure a 3-1 tie victory for team GB.

Murray had won the previous two meetings against Nishikori, and lead the h2h 5-1 overall, thus he was the favorite on home court. He got off to a quick start, breaking for a 3-1 lead, after saving a break point in the opening game of the match. From there he would save another break point to go up 4-1. He was broken for the first time all weekend by Nishikori, who worked himself into the match and eventually got it to 5-5 after saving a set point. However, Murray would convert his third set point of the opening set to take it 7-5.

Nishikori was now firmly in the match at this point however, he broke Murray to open the second set, before being broken back for 2-2. The second set would then go to serve without another break point chance until Kei was serving 5-6, at which point he saved two set points and got it to a tiebreak that he lost 8-6 after having a set point chance.

With team Japan facing elimination from the World Group first round, Nishikori didn’t give an inch, forcing a break point chance at 1-2, and going on to break Murray for 5-3, eventually taking the third set 6-3 without facing a break point. In the fourth set, Murray upped his game and generated two early break point chances in two different games, but Nishikori held on by the skin of his teeth, and broke Murray for a 5-2 lead in two consecutive service games. Murray clearly didn’t want a fifth set, as he broke back and got it to 4-5, but Kei converted his second set point chance to send the match into a decisive fifth set.

The fifth set was a complete circus, featuring five breaks of serve, the fifth and final going to Murray’s benefit. Nishikori broke to open, and was broken twice in a row in his own right to go down 3-1. He didn’t fade though, getting it back to 2-3, before being broken one final time in a long game to go down 4-2. Nishikori fended off two match points on his own serve, but with the crowd at a fever pitch, Murray converted his fourth match point to give team GB victory in the tie.

The fifth rubber between Taro Daniel and Dan Evans was not needed, and was canceled. Team GB will now travel to Serbia and face them in the quarterfinals as they continue the quest to repeat as Davis Cup champions.

Steen Kirby, Courtney Massey, Niall Clarke and Joe Craven, all of Tennis Atlantic, got together on Google Hangouts to discuss the 2015 ATP and WTA Indian Wells BNP Paribas Open Draws, making their predictions and previewing all of the action from March 12-March 22. In addition, Joe, who was a credentialed journalist at the GB vs. USA Davis Cup tie in Glasgow, gave some insights on that experience, and a discussion of the 2015 World Group round was held. Last, and certainly not least, Steen and Courtney debated on whether the Indian Wells tournament should be moved or demoted, with Steen saying yes, and Courtney saying no, while Joe also gave his 2 cents. Check out the link below and enjoy! Comments and feedback are greatly appreciated. 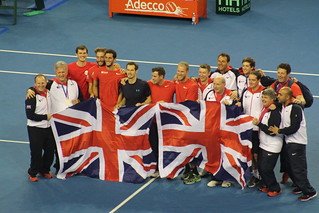 British number one Andy Murray ensured the pressure was kept off his teammate James Ward, by sending team GB into the quarterfinals of the Davis Cup World Group with a 7-6 (4) 6-3 7-6 (4) victory over top American John Isner. Isner lost his second straight Davis Cup singles rubber, this time in straight sets fashion, though he came close to taking a set, and Murray was as calm, efficient and confident as he was on Friday when he dismantled Donald Young.

Despite the crowd doing their best to pump Murray up from the get go, it was Isner that was the better player for large periods of the 1st set. The American who was perhaps a bit too passive on Friday against James Ward, was able to play much more aggressive Tennis against Murray in the early stages of the match and kept things rather close. After serving his way out of trouble to hold for 2-1 in the opener, Isner gained an early break point opportunity in the very next game after ending a fantastic rally with a forehand winner down the line. This particular breakpoint was saved in style by Murray as he got on top of a competitive rally to end it with a forehand putaway. Murray was eventually able to hold his serve for 2-2 but the set continued to follow a similar pattern as Isner held with relative ease and pile the pressure on the Brits serve at every possible opportunity. Serving at 4-3 down in the set Murray had to save multiple breakpoints to hold, it was these moments he relished the most as he produced some his best tennis when he was up against the wall.

Murray was still struggling to hold comfortably and when serving to stay in the set at 5-4 down, some poor play from the Brit gave Isner multiple set points. However Isner was unable to take his chances and Murray eventually held for 5-5, much to the relief of the packed Emirates arena crowd. Fortunately for Murray he had no major issues serving to stay in the set at 6-5 down, holding to 30 to force a 1st set tiebreak. Isner double faulted in the very first point of the tiebreak to gift Murray the mini break and that was that. Some confident play from the Brit ensured that he stayed in control throughout the tiebreak it taking it 7-4. 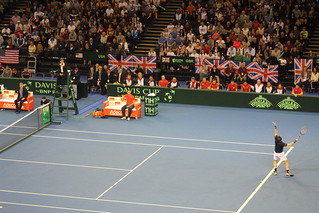 The fashion in which Murray took the 1st set seemed to boost his confidence in the 2nd set and the Brit seemed less nervous than he did in the opening stages of the match. Isner was still playing some really good aggressive tennis but Murray was able to thwart everything that was thrown at him and hold his serve a lot more comfortably than he did in the 1st set, this seemed to awake the 7,700 capacity crowd who were making some deafening noise after every point Murray won. At 3-2 up in the third set Murray really began to step up the pressure on the Isner serve, a brilliant return forced an error from Isner to give Murray his first break point of the match . What followed was simply wonderful, after drawing Isner into the net Murray was able to hit a stunning lob over the giant American to give himself the break and a 4-2 lead in the set. An errant service game from Isner was all it was needed for Murray to take full control of the set, and the Brit showed no signs of nerve as he sealed the 6-3 with a hold to love. 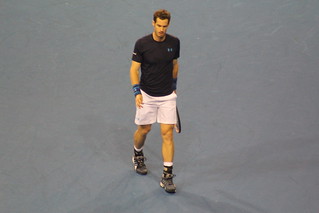 In the opening game of the 3rd set, Murray found himself with three break points after piling pressure on the Isner serve with some brilliant returns. The American might well have given up at this point considering he faced the task of coming from two sets to love down to keep USA in the tie. However, he held firm and with some brilliant serving he won four points in a row and managed to hold for a 1-0 lead in the 3rd set. In the game that followed Isner even had half a chance on the Murray serve as he brought him to deuce with some aggressive Tennis, but some clutch play from Murray once again allowed him to hold for 1-1. After missing the opportunity to break Isner in the first game of the set, Murray cast a rather frustrated figure, berating himself on multiple occasions and even screaming “NO” when he was unable to return an Isner serve. 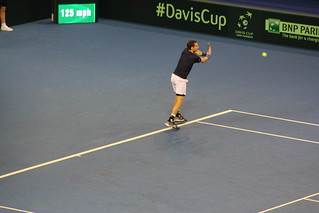 Murray was able to conjure up half a chance on the Isner serve at 4-4 with a nice forehand pass getting him to 30-30 in the game, however Isner fired down two booming aces in a row to hold for 5-4, much to the frustration of Murray who would now have to serve to stay in the set. Murray did experience a bit of a trouble serving to stay in the set, finding himself 0-30 down, but some accurate serving got him out of trouble as he won four straight points to hold. Isner replied with another hold of his own for a 6-5 lead, forcing Murray to serve to stay in the set once more, this time he had no trouble, holding to love to send the set into a tiebreak much to the delight of the packed out crowd who by this point were stamping their feet on the floor to make even more noise. 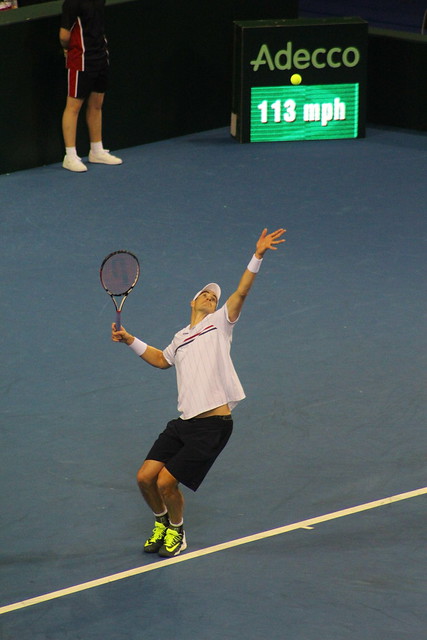 The finishing line was in sight for Murray and early on in the tie break he was able to get a mini break to go 3-1 up after ending up wonderfully crafted point with a smash winner. Isner was fading fast and at 5-2 down in the breaker he dumped a tired looking back into the net, giving Murray four match points. Two of the match points were saved by Isner but on his third match point Murray hit an ace out wide to secure a straight sets win, sending the packed out crowd wild. Isner looked to be an emotional wreck after he match, nearly in tears, and emotionally spent, while Murray truly looked delighted to have helped his nation win in what was a home event for him in his Scottish homeland, he truly enjoyed the entire Davis Cup experience this week, showing great chemistry with his coach Leon Smith, his brother Jamie of course, and his other teammates James Ward and Dom Inglot. 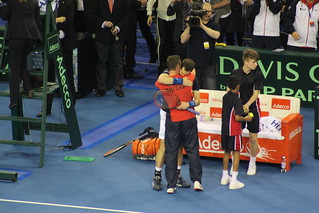 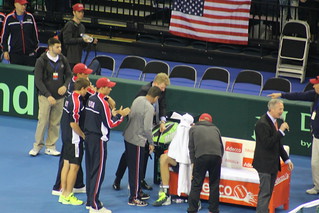 Murray’s win had ensured victory for Great Britain, giving them an unassailable 3-1 lead. The tie eventually ended 3-2 to Great Britain with the USA’s Donald Young beat Great Britain’s James Ward despite winning one less game. Ward retired at 7-5 0-1 up, citing a sore knee. It was most likely just a precautionary measure from the Brit, who is due to play Indian Wells qualifying on Tuesday. 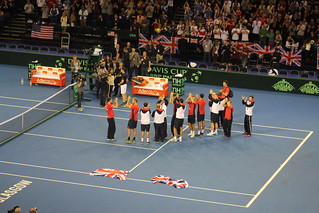