The 2013 season is coming to an end as this will be the final stop on the USTA Pro Circuit this year. We’ll close the Pro Circuit coverage down for the year with this preview of the 50k indoor challenger in Champaign, Illinois.

The usual field for this type of event. 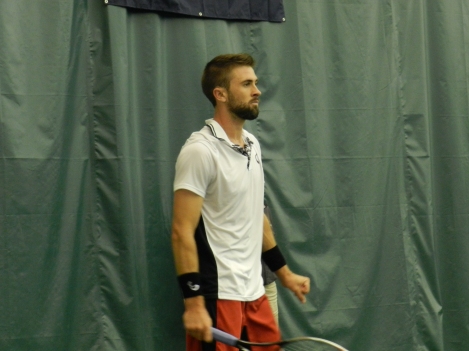 Knoxville champion Tim Smyczek will open with Erik Crepaldi while David Rice or Knoxville semifinalist Takanyi Garanganga await in round 2. In the quarters, expect Sam Groth, as Groth opens with Michael Shabaz and the winner of Jules Marie/Jared Hiltzik. Hiltzik is a current University of Illinois player, while Marie normally plies his trade in European futures and will be a newcomer on the pro circuit.

Former University of Illinois player Rajeev Ram opens with Marcos Giron and then Fritz Wolmorans or a qualifier and one of Eric Quigley/Rik De Voest/Ed Corrie/Dennis Nevolo in the quarters. Giron is a youngster out of UCLA. Nevolo is a former Illinois player as well, while Quigley comes out of the University of Kentucky, making up a strong current/former college contingent this week.

American young guns Jack Sock and Bjorn Fratangelo will do battle in the opening round at the bottom of the bracket. The winner will get Tennys Sandgren or Filip Peliwo in a tough section. Peliwo has a lot of talent while Sandgren comes off semis in Knoxville. The quarterfinalist here will play one of qualifier/Sanam Singh/JP Smith/Tim Kopinski in the quarters. Kopinski is another Fighting Illini player who gets a wild card this week.

Alex Kuznetsov opens with a qualifier before facing Max Neuchrist/Austin Krajicek in round 2. In the quarters, he should play the in-form Peter Polansky, who opens with a qualifier then Denys Molchanov or Prajnesh Gunneswaran, who played his college tennis at the University of Tennessee and is bidding to break into the top 500 at the age of 24. 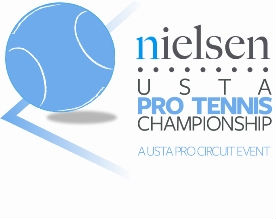 Apologies for the late preview. With Wimbledon going on, it can be easy to forget that the USTA Men’s Pro Circuit is back. This time they’re in Winnetka, Illinois on hard courts, with $50,000 in prize money on the line and ATP Challenger Tour points.

This is a very typical USTA challenger field. 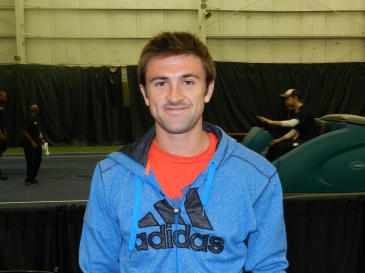 Smyczek, who went an even 3-3 on grass this year, switches back to his preferred hard courts and will take on formerly top 200 player Yuki Bhambri. Bhambri hasn’t played since April because of injury. At only 20, Bhambri is still considered a player with potential, but he has some work to do in order to catch up with some of his peers. This is their first meeting. 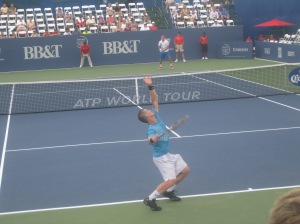 Alex Bogomolov has a respectable hard court record this year and is back near the top 80. He starts with Erik Chvojka and then Adrian Bossel or Eric Quigley. Quigley is a former Kentucky Wildcats player while Bossel has had a decent futures record.

In the quarters, Bogo could face Mischa Zverev/Tennys Sandgren or Evan King/Jason Jung. Zverev notably made quarters in Halle before being double-bageled by Roger Federer. Sandgren, meanwhile, is on a pretty bad losing streak and hasn’t notched consecutive wins at any event since March. King is a former Michigan Wolverines standout and was the 2013 Big Ten athlete of the year.

The Smyczek/Bhambri winner will face Christian Harrison or Adam Feeney and Harrison should be pretty happy to get back on hardcourts after a couple of European clay losses in a row.

Bradley Klahn is at a career high ranking of 178, even with 2 straight losses on grass. He opens with Farrukh Dustov, who has been competitive on both clay and grass recently. After that, Robby Ginepri or a qualifier will be his opponent. Ginepri hasn’t played a tournament match in a month. 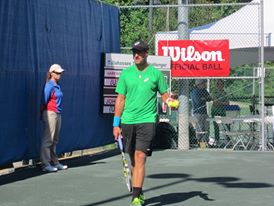 Newly minted top 100 player Steve Johnson, who lost in the opening round of Wimbledon, will play Michael McClune before facing Michael Venus or Ante Pavic. In the quarters, Johnson should face Somdev Devvarman, if Dev can beat a qualifier. Dev will also have to play Saketh Myneni or Dennis Nevolo of the University of Illinois, a wild card recipient. Johnson just beat Devvarman on grass in Nottingham. 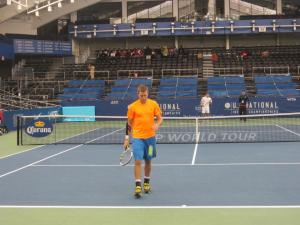 Jack Sock is busting on the door of the top 100 and opens with Fritz Wolmarans and then Austin Krajicek or Alex Bogdanovic. In the quarters, Sock should face Donald Young, but also watch out for wild card Jarmere Jenkins. Jenkins plays a qualifier in the first round, like Donald Young, and he should play Young in R2. Jenkins just won a futures title and made the final in another recent futures tournament. He’s riding a hot streak right now.

Not easy to pick, but Bogo should get out of the top section. Smyczek has a slight edge over Klahn, and Sock should beat Young/Jenkins. I’ll also go out on a limb and pick Devvarman over Johnson from the bottom section. Smyczek has a 2-0 h2h on Bogo, but I think Bogo is playing better right now and their last meeting was in 2010. Sock should avenge Devvarman for a loss on grass in the Nottingham Challenger.

That would be a rematch of a match that I was in the stands for in Atlanta last year. Sock should edge past Bogo again if this final comes to fruition.

Six-foot-eight South African is currently ranked a career-high No. 23 in the world.

Anderson is coming off fourth-round appearances at the French Open and Australian Open, catapulting him to a career-high ranking of No. 23 in the world. He is through to the third round at Wimbledon this week following a pair of straight-set victories, facing only one break point along the way.

The South African power hitter played for the Sacramento Capitals in 2012, leading them to the WTT Finals as a league rookie.

Though the Kastles defeated the Capitals 20-19 in the championship match, Anderson nearly knocked off Washington single-handedly. With his ferocious serve in full flight, Anderson defeated 2012 WTT Male MVP Bobby Reynolds 5-3 in singles and teamed with Mark Knowles to beat Reynolds and Leander Paes 5-2 in doubles.

“Playing in last year’s finals, I saw for myself the energy and the passion of the Kastles players and fans,” said Anderson. “So I jumped at the chance to join the team, and I can’t wait to get started on July 8.”

The 27-year-old Anderson comes to the Kastles in the midst of the hottest stretch of his career. He is 27-11 in singles this season on the ATP World Tour, reaching the fourth and fifth finals of his career at Sydney and Casablanca respectively.

Anderson also picked up his third Top 5 win along the way, beating World No. 4 David Ferrer at Indian Wells. He previously defeated then-No. 4 Andy Murray at Montreal in 2011 and then-No. 3 Novak Djokovic at Miami in 2008.

“With his history of success individually and on a team, Kevin Anderson will be a perfect fit for the Kastles,” said team owner Mark Ein. “Our fans saw first-hand last season how good Kevin is, but he will look even better wearing red and blue long into the future.”

Kastles coach Murphy Jensen will field a trio of talented men’s players when the Mylan WTT season kicks off. Fans of the team can expect to see Anderson, Reynolds and Paes all in the lineup July 8-11 as Washington puts its 32-match unbeaten run on the line.

With victories at home over the New York Sportimes on July 8 and the Boston Lobsters on July 9, the Kastles would own the longest winning streak in major U.S. pro sports history.

Following a road match in Dallas on July 10, it will be a battle between big servers when Anderson takes on former World No. 1 Andy Roddick of the Springfield Lasers on July 11 at Kastles Stadium.

Anderson and Roddick have split four career matches on the ATP World Tour, with the new Kastle winning their most recent meetings at Delray Beach in 2012 and Beijing in 2011.