Last night’s news that Novak Djokovic was pulling out of Cincinnati seemed like a hoax to me at first glance. 18 hours later, it appears that there’s been plenty of time to clear the air. Just as I put a positive spin on his doubles loss last night by suggesting on twitter that he might be practicing in Cincinnati a little earlier than planned, followers were quick to point out that Alex Krstanovic had posted the following only a half-hour before my wishful tweet:

While the Serbian-speaking reporter should have an in with Novak and be able to decipher comments made by his entourage, there wasn’t an official report on it all night.

He told me that himself, so I’d call that pretty official. https://t.co/Lmwajqaqs3

With no denial issued by Djokovic, the tennis media world had to write something about it, and they did. Not surprisingly, no reports have dug any deeper than going with the “reportedly” cover, meaning “based on a tweet”.

It would be a shame for the world #1 to skip, seeing as he has never won the Western & Southern Open. Like TMF, the Talk Tennis Guru reminded us on the Talk Tennis Forum, “Many great players – Federer, Nadal, Sampras, Agassi, Connors, Lendl, Becker, Edberg, Wilander have won this event. Even Murray won Cincinnati twice.”

Make it three for the Muzzer?

Don’t expect a big press release from the Western & Southern Open. The main news on their site is this little ditty:

The King of Wishful Thinking

Stan the Man has been the speculation of Cincinnati withdrawal syndrome for over a week now based on his recent injuries. Unlike Djokovic, he skipped Rio, and the latest news is that coach Magnus Norman has downgraded his chances for Cincinnati as “very doubtful”.

Injury is one thing, but “saving” yourself for the slams is downright un-American. Ironically, it was invented by Serena and Venus Williams,  but it’s still not right. For the tennis provinces, a tournament like the Western & Southern Open is America’s U.S. Open. I have met fans who drive 500 miles to see their favorites in action in the ‘Nati, and they are the real losers here.

He’s a friendly enough player, but if Djokovic does skip Cincinnati for any reason other than debilitating injury, I won’t be cheering for him on the inside if he hoists another trophy in Flushing Meadows on September 11.

Raonic still sidelined with adductor tear; Nestor unable to travel due to personal reasons; Replacements to be confirmed at later date

Guadeloupe, February 29, 2016 – Tennis Canada announced Monday that No. 1 singles player and world No. 13 Milos Raonic will be unable to compete in the upcoming Davis Cup by BNP Paribas first round tie between Canada and France due to the ongoing recovery of an adductor tear suffered at the Australian Open. In addition, world No. 12 doubles player and Davis Cup stalwart Daniel Nestor will also not travel to Guadeloupe due to a last minute family matter.

“I am deeply saddened to not be able to join my team for the Davis Cup tie in Guadeloupe,” said Raonic. “Davis Cup has always been and will continue to be a priority in my schedule. My body at this moment does not allow me to compete as the muscular tear I sustained in Australia has not completely healed. It is not easy for me, as I love representing Canada and competing alongside a great team of players and staff. I will continue to rehab and try to be back on tour as soon as possible. I wish the Davis Cup team a great and prosperous weekend. I will be watching and cheering them on.” 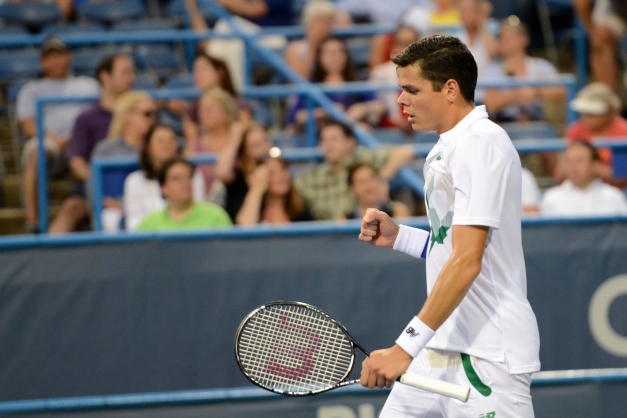 Raonic has not played a match since suffering the injury during the semifinals in Melbourne, where he matched his career-best result at a Grand Slam. The injury primarily affects his lateral movement, limiting his ability to push-off and run from side-to-side. He was already forced to withdraw from the two previous ATP World Tour events in Delray Beach and Acapulco. He is expected to be sidelined for another 10-12 days according to doctors.

For Nestor, this is just the second tie he has missed in the past 15 years of Davis Cup play.

“I’m disappointed that I can’t be there with the team this week,” said Nestor. “The last few years we’ve come a long way and we’ve had some good opportunities to do well at Davis Cup and it’s definitely frustrating that we haven’t been able to field our top team and maximize our potential due to some of the injuries and unforeseen circumstances that have arisen. I’m wishing the team the best of luck this weekend and will be looking forward to rejoining them for the next one.”

Team captain Martin Laurendeau will officially name the two replacement players at a later date. The players currently with the team in Guadeloupe include Philip Bester (Vancouver), Frank Dancevic (Niagara Falls, Ontario), Vasek Pospisil (Vancouver) and Adil Shamasdin (Toronto). Laurendeau has up until one hour prior to the official draw on Thursday to make his changes. The tie is scheduled to be played on outdoor clay at the Vélodrome Amédée Detraux in Guadeloupe, France from March 4-6.

“Obviously this is a huge loss for our team as Milos and Daniel are integral to our Davis Cup success,” said Laurendeau. “But I also know it’s not easy for both of them. Milos was playing maybe the best tennis of his career in Australia and is eager to get back on court. He was hoping that would be here in Guadeloupe but he’s just not going to be ready on time. And Daniel has answered the call for this team a record number of times over the past 20 years. For him to not be here, we know it’s with very good reason. The rest of the team will have to refocus now and prepare thoroughly as we all know the tough challenge that awaits us against this French squad.”

About Davis Cup
Davis Cup by BNP Paribas is the World Cup of Tennis. It is the largest annual international team competition in sport, with 135 teams entered in 2016. The competition is 116 years old having been founded in 1900. The title sponsor is BNP Paribas, the Official Bank of Davis Cup. International sponsors are Rolex (Official Timekeeper), Adecco (Official HR Sponsor) and Betway (Official Betting Sponsor). beIN SPORTS is the Official Global Media Rights Partner. Follow all the action onwww.daviscup.com, www.copadavis.com, www.twitter.com/daviscup, www.facebook.com/DavisCupTennis, www.Weibo.com/daviscupofficial and www.DavisCup.tv.

Former University of Tennessee standout Tennys Sandgren looked like a man on a mission in a 61 minute 6-3, 6-1 win over James McGee in the first round of the Charlottesville Men’s Pro Challenger today.

Having spent most of the year sidelined due to a hip injury, Sandgren is determined to finish the year strongly.

Sandgren briefly discussed returning to top physical form and his preference for the Australian Open Wild Card being decided over three challengers rather than a weekend playoff.

“I feel really good. Today was a good day for me. This is one of my best days since coming back”, he said.

On the Australian Open Wild Card Challenge: “I’m excited at these three events instead of the tourney in Atlanta. That was a heart breaker for me last year. I put in a good tournament and I didn’t have a lot to show for it. At least here, if I come in second, I probably get a lot of points under my belt. I’m excited to be playing well and I’m looking forward to these three weeks”.

Sandgren is a Tennis East Coast fave. He’ll face 5 seed Gastao Elias next in Charlottesville for a berth in the quarterfinals.

There’s nothing worse than that feeling when you’ve been caught in a fib by Mom.

The Mom in this case is US Fed Cup Captain Mary Joe Fernandez.

Veteran Freelancer Sandra Harwitt is the Helen Thomas of the tennis press (before the White House correspondent lost it). Today, she mentioned to Fernandez–almost in passing–that Stephens was playing in Doha. In fact, she’s scheduled tomorrow against Petra Cetkovska.

Fernandez countered, “You sure Sloane’s in Doha? She had a wrist injury”. El Capitan was clearly caught off-guard by the news. After all, she has been quite busy for the last week.

As you may remember, Stephens decided against participating in the Fed Cup tie due to a wrist injury two weeks ago.

Diplomatically-yet-not-so-cryptically, she added the following:

I respect and I admire my team’s decision to play Fed Cup over Doha.

So, if you can make this a priority, I think it’s incredible and I think you get a lot out of it. As a player, it’s some of my fondest memories.

But I understand the challenges. And that was one of Venus’ challenges.

You have to make a decision on what’s your priorities and what’s important to you.

Don’t you hate it when Mom talks like that? She didn’t scold you, but she did. Just a little bit.

Steve Fogleman is Editor of TennisEastCoast.com, a Mid-Atlantic based tennis website. He is in Cleveland, Ohio covering the Fed Cup tie between USA and Italy for Tennis Panorama News.

Monfils out @CitiOpen With Biceps Injury

This was the terse note at the top of the daily results email from the Citi Open Media Director tonight:

‘Note: Gael Monfils has withdrawn with a biceps injury. His position in the draw will be filled by a qualifier.’

Poring over these qualifying matches and trying to write posts about Saturday’s on-court action suddenly came to a sobering halt.

All I know is that he had a pair of grueling three setters in a row at the ATP Vegeta Croatian Open over the last two days. On Friday, he beat Albert Montanes 6-0, 5-2, 7-5 and yesterday in the semifinals, Fabio Fognini got what was left of Monfils in eliminating the Frenchman 6-0, 3-6, 7-6(3).

I feel for Gaels Monfils.

And all the amateur and professional photographers in the DC area who see him as the Holy Grail of Tennis Subjects with his vertical style. He will be missed.

In the meantime, you can watch this video of Monfils in DC from 2011, which seemed to infuriate his fans to the tune of 109,000 views. It was an early attempt at humor that won’t be repeated anytime soon, even though given the metrics, maybe I should?