Flavia Pennetta has called her tennis career to a close after the Italian won her maiden grand slam title after a straight sets victory over compatriot Roberta Vinci.
For all the pre-tournament hype about Serena possibly completing the calendar year grand slam, it was another piece of history that was created.

After upset victories for Pennetta over Halep and Vinci over Serena, little Italy would have two representatives in a grand slam final- A first.

After a first week that saw big names crash out early, the second week would provide similar drama. Pennetta put in a class display of tennis to shock seconded seeded Halep in a rain delayed semi-final, whilst Vinci broke the hearts of Serena fans across the globe with a three sets win over the defending champion.

The 26th seeded Pennetta went into women’s final on Saturday as the favourite, and she lived up to that tag early. After failing to convert five break points at 2-2, she finally got it done with the sixth attempt.

The lead lasted all of two games as Vinci was able to break back to level the score. There was nothing to separate the Italian pair in the opening set, so a tiebreak was needed. Vinci had experienced grand slam success in doubles with Sara Errani but found singles to a whole different kettle of fish. It would be the 26th seed who would claim the breaker 7-4 and take a big step towards taking home the crown.

With the nerves out of the way and wind behind her sails, Pennetta was on fire in the second set, winning the first four games. But with victory in sight she allowed one break back to Vinci who was fighting for her survival.

But Pennetta would hold strong with her nerve, and whilst serving to stay in the match Vinci would eventually cecum to the pressure. A love break would seal it for Pennetta who realised she achieved her dream of being a grand slam champion.
“I never think to be so far. I never think to be a champion…It’s a dream come true.” Said an emotional Pennetta.

Despite the joy of the Italian claiming her maiden slam, tennis was hit the sad news that she would be hanging up the racket, following in the footsteps of Marion Bartoli who retired after winning Wimbledon two years ago.

“Before I started this tournament one month ago, I took a big decision in my life. This is the way I would like to say goodbye to tennis.” Added the Champion. “I want to thank everyone who helped me throughout my career, all my coaches, my family – they couldn’t come, but I know they’re going to be really happy and proud of me … thank you for everything, you gave me a lot of emotion and I love you guys.”

Despite the sadness of perhaps not seeing Pennetta play again, this is a spectacular way to bow out and could start a change of the tide on the WTA tour.

Serena will have to wait until next year to start her quest for title #22 and another calendar year grand slam quest, but the rise of the two Italians could inspire confidence in the rest of the tour to step up on the big occasions.

To put it simply, we have got some very interesting times ahead.

Sara Errani Speaks About A Stellar Season and “Sufrimiento” #NHO13

Sara Errani Speaks About A Stellar Season and “Sufrimiento”

In 2012, Sara Errani made a racquet change and had a great year.

Many predicted she would struggle to keep her top 10 status with a need to defend so many rankings points. The doubters were wrong. Errani has met her 2013 goals already.

She shared some thoughts with the press at the New Haven Open on Monday.

On the Racquet: ” The racquet was the beginning of the change.  From then, I started to play better on the court. I started to win more matches. I started to feel more confident.”

She was asked about Bartoli’s retirement and the pain Bartoli cited in her decision. She brought up the Italian term “sufrimiento” to describe the physical toll that the game takes on players.

But she’s thrilled for Marion. “There is another new life after tennis. She’s young and can do many things. So, why not?” 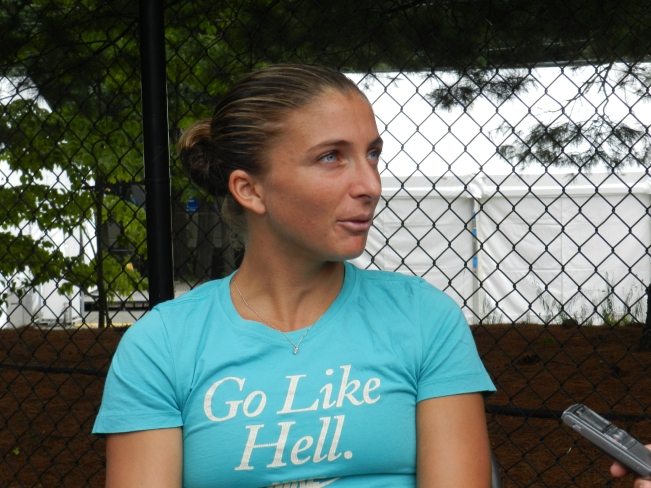 Good friend Roberta Vinci seems to pop up in Sara’s singles draw all the time. Is that frustrating for the Italian doubles duo?

“Sometimes, yes. Maybe you would like to be on the other side. It’s tennis. It happens. There are more matches to play.”

Sara won’t have to face Roberta Vinci in New Haven, as her Italian counterpart fell to Carla Suarez Navarro in the first round. Errani has an excellent chance to advance to the quarters at the tournament, as she plays Ekaterina Makarova this afternoon.