A big day of tennis on Thursday saw Ivo Karlovic and Steve Johnson continue their winning ways at the 2016 Citi Open, and they backed it up on Friday, defeating Jack Sock and John Isner respectively in quarterfinal round action.

Karlovic dominated Bernard Tomic in his round of 16 match, winning 7-6 6-3. A tight first set was followed up by a poor showing in the second from Tomic, who was broken and found himself behind and unable to come back against Karlovic’s ruthless serve. Karlovic, who recently became the oldest ATP title winner at 37, followed up that performance with a 7-6 7-6 victory Jack Sock. Karlovic smacked 26 aces in a match that saw no break points converted by either player. After dropping the first set tiebreak, and not earning a single break point chance, Sock had a chance early in the second, two chances at 3-3, and one more chance at 4-4, but he couldn’t convert, and ended up losing the match in another tiebreak.

Johnson defeated Ryan Harrison on Thursday 6-4 6-4. He served so well Harrison had no chances to break him, and just a single break in each set was enough to grab the victory. In the quarterfinals he dealt with 29 aces by John Isner, and fended off six break point chances for Isner to win 7-6 7-6 in just under two hours. Isner had four set point chances in the first, but was unable to convert, smashing his racquet after dropping the first set tiebreak. In the second, although frustrated, he battled on, and forced Johnson to save two more break point chances serving 3-3. 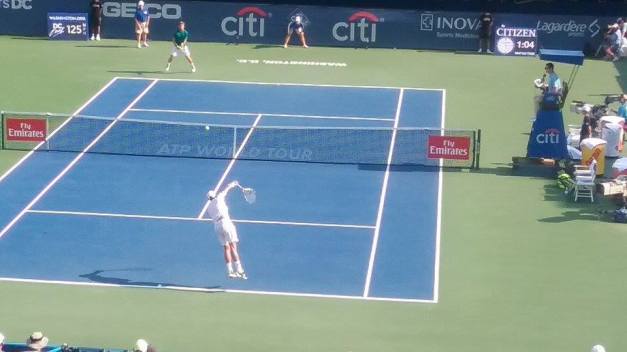 A tiebreak would follow shortly thereafter, and what a tiebreak it was. Isner was up 6-3 at one point, but Johnson saved three set point chances, to earn a match point at 7-6. Isner would get set point chances four more times, while Johnson had four more match point chances, before finally converting his sixth MP chance to take the tiebreak 17-15. When it mattered, Isner’s forehand was too erratic, and Johnson dug deep on his own serve to fight through the match. It was simply not Isner’s day.

In other Men’s round of 16 action on Thursday, Gael Monfils was dominant against a young Borna Coric. Coric was left looking for answers as he lost 6-2 6-3 to the gliding Frenchman. Monfils served with pace and angle, covered the back of the court with grace, and played attack tennis, coming forward when needed, as Coric lacked power on his shots, and at times his returns were wildly off, resulting in unforced errors. Coric got off to a miserable start, as he just didn’t look comfortable against Monfils style, and it never really got better for the young Croatian. Monfils played one of his best matches of the season, and was never pressured on his own serve.

Alexander Zverev won a battle against Malek Jaziri 6-2 5-7 6-2. Zverev was the dominant player for most of the match, but Jaziri was a pesky opponent to put away as he battled for over two hours. Zverev needed three set points to close out the first set, after he had saved some Jaziri break points early in the first. Then Jaziri fought even harder, saving break points in two of his service games in set 2, before taking his one and only break point chance of the set up to that point, and serving out the set on his third set point chance to force a decisive third set. In the third, after dropping his first service game, a long one where Zverev earned four break point chances, Jaziri faded, and Zverev was able to win with relative ease to book a spot in the quarterfinals.

Sam Querrey was the more consistent player against Alexandr Dolgopolov in one of the two late matches on Thursday, winning 7-6 6-3. Dolgopolov produced his share of shotmaking highlights, but after early breaks in the first set for both players, they calmed down on serve and the match ended up in an opening set tiebreak. In the second, Dolgopolov fought on, and he was up a break 3-1, but he wilted from there, and a confident Querrey reeled off five straight games to complete his victory.

Benoit Paire got his match against Gilles Muller moved to stadium court, and put on a stadium court showcase in the late night match. Paire won 6-2 3-6 7-6 over the big serving Muller. Muller was broken early in the first, and broken once more, to allow Paire to walk away with the set without facing any break points on his own serve. In the second, a single late break produced a set for Muller as he held for love to force a third 5-3 up. Muller had an early break point chance in Paire’s long first service game in the third, and he got three more chances with Paire serving 5-5, but he couldn’t convert, and without generating any break point chances in the third, Paire earned a narrow tiebreak victory. Both Monfils and Paire are playing well and look to be in a great mood in D.C.

Also on Thursday, Sock defeated Dan Evans 6-1 7-5, as Evans seemed a bit gassed after a good week in Washington, and Isner continued his winning streak against Marcos Baghdatis 7-6 6-2. Isner has never lost to Baghdatis, who fought hard in the first, but faded from there, as he looked entirely flummoxed about what to do with Isner’s huge serve. Mergea/Tecau defeated Marach/Martin and Nestor/Roger-Vasselin got past Lindstedt/Troicki in ATP doubles quarterfinal action. 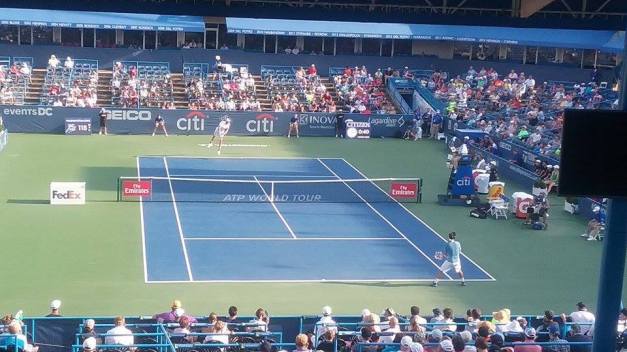