Grand Slam qualifying. A mix of promising juniors, weathered journeymen, slumping former ATP level players and everything in between. Taking place during the week before the big lights shine, qualifying is a tournament of its own where players vie for those coveted 16 main draw slots. Pressure is high and players can either make or break careers in the qualifying event.

US Open qualifying this year was full of great matches and interesting stories. One thing that is particularly interesting about the US Open qualifiers to American tennis fans is the wildcards given to young American hopes. This year, a few young Americans made an impact in the qualifying draw. Francis Tiafoe, a 16 year old from Maryland battled hard against Tatsuma Ito but eventually fell 7-6(6) 6-4 6-3. Fellow 16 year old American hope, Stefan Kozlov faired better than Tiafoe, winning his first round match vs one of the best NCAA tennis players in the nation, Mitchell Frank of UVA 3-6 6-0 6-2. Kozlov lost in the 2nd round to another promising junior, Borna Coric, 2-6 6-2 6-2. 2013 Kalamazoo champion and 2014 runner-up, Colin Altamirano, easily beat Luca Vanni in the first round 6-4 6-2 but was overwhelmed by Berankis in the 2nd round after the first set, 2-6 6-2 6-1. Altamirano showed his talent but failed to show the mental maturity that is needed for the next level. He will take his game to Virginia next year and play under coach Brian Boland as a Cavalier where he will look to improve his mentality and to sharpen certain aspects of his game.

But despite the hype surrounding Tiafoe, Kozlov and Altamirano, the young American who fared the best in qualifying was Ernesto Escobedo, who had the lowest expectations among them all. The hard hitting 18 year old from California rolled through Somden Devvarman and James Duckworth in straight sets, both of whom were heavily favored against Escobedo, before falling to Facundo Bagnis in the final qualifying round. It was a great week for the youngster and hopefully for him something to really build upon.

Outside the borders of the red, white and blue, there were two prominent juniors who made their way into the main draw of the US Open with impressive qualifying runs. Aforementioned Borna Coric will be making his grand slam debut after qualifying. The young Croat impressively took care of veteran Jimmy Wang in the final round of qualifying 7-6(4) 6-1 to book his spot in the 128 man draw. Probably the most impressive set of three wins for any player in qualifying came from Yoshihito Nishioka. He started his quest to qualify by beating the #5 seed and ATP experienced Horacio Zeballos 6-4 6-4. In the 2nd round, he beat another hyped junior, Thanasi Kokkinakis, in an epic 7-5 4-6 6-4 match. The 18-year-old Japanese player finished his ascent into the main draw with a dominating 6-3 6-1 win over former top 100 player Marsel Ilhan of Turkey. Exciting junior prospects making grand slam debuts by fighting through qualifying is always a treat to see for tennis fans, and the fans following qualifying saw it this week through Borna Coric and Yoshihito Nishioka.

Qualifying is not only a place for juniors with big careers ahead of them with this only being the 1st step. It is also the place for weathered journeyman who battle week in and week out on the challenger (and in some cases the futures) tour trying desperately to give themselves the chance to play in a grand slam; to finally get to play in a best of 5 match vs the best players in the world on a big stage with millions of eyes watching them around the world. This year at the US Open qualifying, four such journeymen realized their dream and qualified for the main draw.

Taro Daniel’s grand slam qualifying attempt almost had a very short life as he had to win a 2nd set tiebreak 9-7 after he had lost the first set 6-4 vs Alex Kuznetsov in the first round of qualifying. After getting past Kuznetsov, Daniel got past Toni Androic and Peter Polansky, both in 3 sets to slot himself into the main draw of a grand slam for the first time in his career. It is undoubtedly the top moment of the Japanese player’s career to this point.

Moldova will have a player representing them for the first time ever in a grand slam after Radu Albot qualified for the US Open. Albot will fly the flag of the small former Soviet state of only 3.5 million people in New York after overcoming James Ward in 3 sets in the final round of qualifying. The Moldovan had previously never made it past the 2nd round of qualifying for a grand slam, but this time he made the most of his moment of opportunity.

Niels Desein has had a career of few highs. A career high of only 164 and currently deep in the 200s, the Belgian had the first big moment of his career at age 27 as he qualified for the US Open. He defeated Oscar Hernandez in the final round of qualifying to cement his spot. Hernandez has an amazing story himself during this qualifying campaign. Hernanadez, who had been effectively retired from professional tennis, came from nowhere to crush the #2 seed Go Soeda in round 1 and then advanced to the final round of qualifying after another win in his 2nd match. Hard courts had never been his strong surface, yet the 36 year old Spaniard still nearly qualified for the premier hard court grand slam in tennis.

Perhaps the best story of the entire qualifying tournament came from Irishman James McGee. McGee played college tennis at NC State and was never considered a great talent but he still was determined to be the best player he could be. Over the last few years, McGee has toiled away, slowly but surely raising his ranking but has never had a standout moment.

Until now. After cruising in the first round 6-1 6-1, McGee’s tournament was about to become much more dramatic. In round 2, he faced talented Indian youngster Yuki Bhambri, who was looking to make his grand slam debut as well. Bhambri served for the match at 5-4 in the 3rd set but McGee dug in to get a break and finished off Bhambri 5-7 6-2 7-5. In round 3, McGee faced Ze Zhang, yet another player who was fighting to get to his first grand slam main draw. Zhang overwhelmed McGee in the first set, handing the Irishman a bagel. But McGee was determined to accomplish his dream and won 0-6 6-4 6-4 despite some cramping in the final game. McGee let the tears flow after qualifying, because finally after years of hard work and dedication, he will be in one of the premier events in all of tennis.

Daniel, Albot, Desein and McGee. These four plus the two juniors mentioned above combine to create six players who will be making their grand slam in Flushing Meadows, a high number for a grand slam.

128 players started the week with a dream of playing in the US Open. Some had played in several grand slams before, some just one or two, but many never had. At the end of three grueling rounds, sixteen players emerged as US Open qualifiers. Getting in is the first step and now each of the qualifiers will be determined to make their presence known in the main draw. 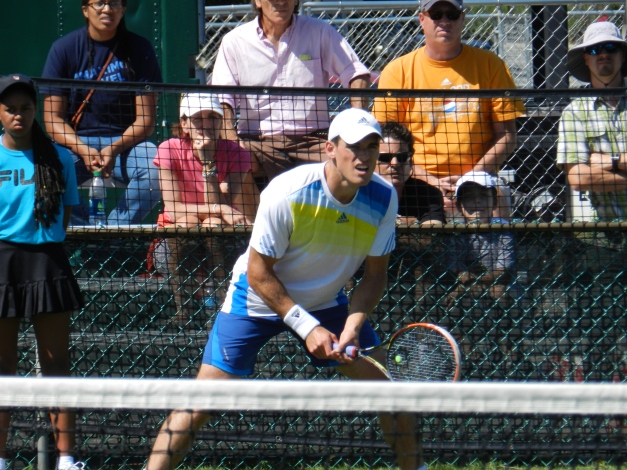 One breezy day removed from Tropical Storm Arthur, the favorites breezed into final round qualifying at the Hall of Fame Tennis Championships in Newport, Rhode Island. Top qualifier Ante Pavic needed all of 53 minutes to defeat Frederik Nielsen, 6-3, 6-2. 2 seed Hiroki Moriya needed all of 55 minutes to advance past Divij Sharan 6-2, 6-3. Ruben Bemelmans played what seemed like a marathon, a 108 minute three set win over Gerardo Lopez Villasenor, 6-7(8), 6-3, 6-1.

The pair of Americans in qualifying also rushed through the opening rounds. Kevin King dispatched Jan Hernych, 6-4, 6-2, in 1:02, while Austin Krajicek wasted little time with Adrian Bossel, 6-2, 6-1 in just 42 minutes.

In the carnival sideshow, 42-year-old wild card Sandor Noszaly hit 12 double faults and gave himself little chance against 23-year-old Takanyi Garanganga. Garanganga won the match 3 and 3. Thus inspired, I will be seeking a wild card to qualifying next year.

The shortest match of the day was the double-bageling of Sarvar Ikramov in a 34 minutes. For a complete match.

The fans were due for a real match and they finally got one at the end of the day. James McGee came back and broke back in the second set on the verge of a straight sets loss. Snatching defeat, he then won the 2nd set tiebreak and grinded out a win over Michael Venus, 6-4, 6-7(3), 6-2. in 1:51.

It was an interesting day at my final day of on-site coverage at the 2014 Tallahassee challenger. All of the singles matches were moved indoors at the FSU tennis complex, and because of that situation only 1 court of the 5 match courts was visible. Therefore, I only got to catch 2 matches up close and the better part of a third one, though that’s as good as anyone was able to do today.

Alex Kuznetsov kept the Har-Tru French Open wild card race alive, as he defeated Eric Quigley, 7-6 6-2 to get into round 2. Quigley was able to use his powerful serve to keep Kuznetsov at bay in the first and force a tiebreak, but he got bageled in that tiebreak and his game crumbled from there. Kuznetsov was able to move his way around returns and take control of the match.

Frank Dancevic annihilated a flummoxed Collin Altamirano, 6-2, 6-2 as Altamirano got way too frustrated and lost his composure throughout the match. Dancevic cooly kept things rolling, keeping the ball in play, and he is also into round 2.

James McGee, who is a super nice guy might I add, and lived up to the humble reputation I’d heard about many times before, won 6-2, 6-4 over Bjorn Fratangelo. Fratangelo seemed less comfortable moved off of clay and his game did not translate as well indoors as McGee, who simply overpowered him.

Joining McGee, Kuznetsov and Dancevic in round 2 are Darian King, who won 7-6, 6-3 over Cristian Gonzalez Mendez, who was literally playing on his home court today. Evan King beat Ryan Agar, 6-4 6-3, Bobby Reynolds beat Nick Meister, 6-2, 6-2 and Mitchell Krueger won in 3 sets via retirement due to a foot injury against Ilija Bozoljac. The final score was 2-6, 7-6, 2-0 as Krueger fought hard to not lose in straights.

Skugor/Veic beat Bozoljac/Venus 3-6, 6-4, 10-7 in doubles and Kokkinakis/Kubler beat Rice/Thornley, both teams reaching round 2 in matches played on outdoor clay at the original venue.

Because of the rainy weather, tomorrow’s tennis has again been moved indoors to the FSU complex, as all the round 2 matchups will take place there. Young vs. Evan King, Darian King vs. Kuznetsov, Dancevic vs. Veic, Reynolds vs. Melzer, Ward vs. Kubler, Ginepri vs. Polansky, McGee vs. Krueger and Williams vs. Nishioka. I see at least 3 matches there, possibly 4 where the result should be different because of the surface being played on. 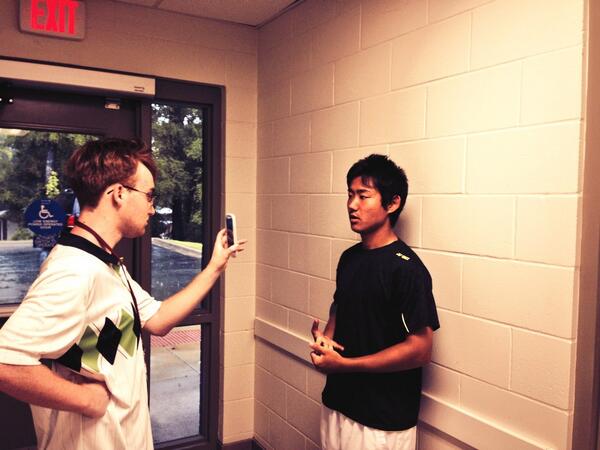 This has been an interesting tournament to the say least, and I’ll be back after the final with a wrap up of everything.

For now, it was a pleasure being able to cover Tallahassee again and it remains a challenger with some great hospitality and wonderful tennis.