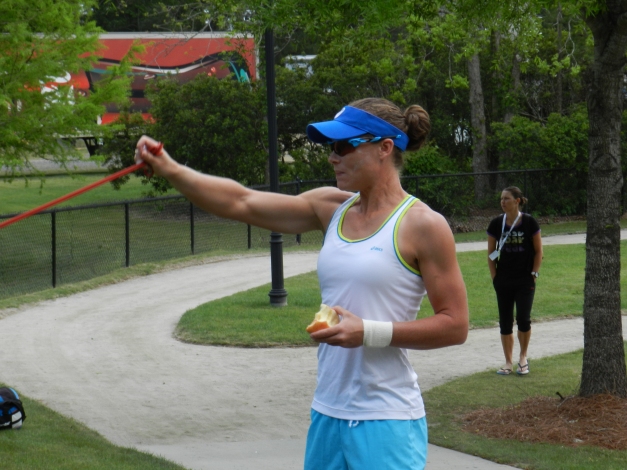 Multi-tasking Stosur: Stretches with 1 arm, eats with another;
Finishes off Voskoboeva at Noon, Defeats Venus at 4.

Sam Stosur is Wonder Woman. After completing more than half of last night’s match this morning against Voskoboeva, she went on to knock off Venus Williams in the quarterfinals only hours later. Tomorrow, Stosur will go for the Williams Exacta in attempting to knock off both Williams Sisters in successive singles matches. That will be known as the Real Final, with the 2 seed and the 5. The other semi, between the 14 and 9 seeds, will see Polona Hercog against Lucie Safarova. It was this close for Hercog to be picked as Tennis East Coast Dark Horse to Win it All, but Wickmayer was settled upon at market close. I swear.

It will be interesting to see what Safarova does tomorrow. Will she be tomorrow’s Wonder Woman, or will the conventional wisdom of “singles before doubles” rule the day?