Sweet Victories for Tsonga and Raonic in Metz and St. Petersburg

Jo-Wilfried Tsonga took the title in Metz for the third time in his career with a 7-6(5) 1-6 6-2 victory over fellow Frenchman Gilles Simon. Simon battled hard for two sets, but Tsonga’s relentless attack eventually broke him down in the final set, as Tsonga recovered from a poor batch of services games in set 2. The title is the first of the season for Tsonga, and extends his streak of years with at least one ATP title to five (2011-2015).

The 30 year old beat Mischa Zverev and Nicolas Mahut in three sets then improved his tennis to win in straight sets over an in-form Philipp Kohlschreiber. Kohlschreiber reached the semis by virtue of #1 seed Stan Wawrinka’s withdrawal.

Simon found great form himself indoors on home soil and scored three routine wins over Edouard Roger-Vasselin, Gilles Muller and Martin Klizan to make the final, finally running out of steam in that final.

Lukasz Kubot and Roger-Vasselin, a pair of veterans, beat Pierre-Hugues Herbert/Nicolas Mahut in an upset to take home the doubles final.

The renewal of the St. Petersburg Open saw Milos Raonic post his best result post foot surgery as the Canadian served well and took home the title. Raonic, like Tsonga, extends his years with at least 1 ATP title to five with a 6-3 3-6 6-3 victory over Joao Sousa. Sousa played an aggressive match, and once more posts an excellent Fall indoor hard court result, but he simply couldn’t get enough returns in for winners to beat Raonic in the third set.

Raonic dominated Evgeny Donskoy, Tommy Robredo, and Roberto Bautista Agut without dropping a set on the fast indoor surface to reach the final. Sousa was lucky to slip past Radu Albot in three sets but the best was yet to come as he took out Marcel Granollers, Simone Bolelli, and Dominic Thiem without dropping a set in his next three matches. Bolelli upset Tomas Berdych in round 2.

Upsets began the day at the Campbell’s Tennis Hall of Fame Championships in Newport. David Goffin was the first victim, falling 6-4. 6-3 to qualifier Benjamn Becker in 1:09. Becker played three matches on these courts over the last three days, and the experience showed. Goffin never led in the match, and Becker won all 13 first serve points in the second set. Then, Denis Istomin, the only Wimbledon 4th rounder in the field, was knocked out by qualifier Tim Smyczek 3 and 3. Finally, Izak Van Der Merwe took out Gilles Muller in 3.

Istoming following his defeat at Newport

Those expected to win who actually did included Sam Querrey in a 7-5, 7-6 (5) triumph over Alex Bogomolov, Jr. Querrey used 11 aces to get over Bogo.  Kei Nishikori defeated Igor Sijsling 6-4, 6-4. And Milos Raonic came back from a first set loss to emerge past Ebden. Isner was the only one today who was able to beat his qualifier, knocking off Sergei Bubka. 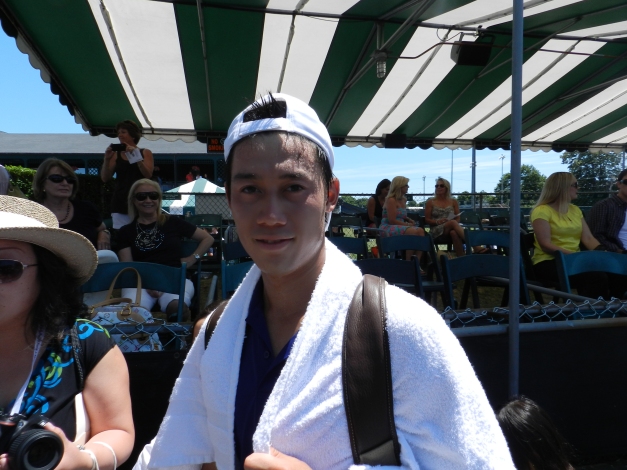