A steamy day 1 at the 2016 Citi Open Qualifying held true to form, as most of the favored players advanced with ease into the second round of qualifying matches. On the ATP side, Matthew Barton, Alex Kuznetsov, Alexander Sarkissian, Marinko Matosevic, James Duckworth, Ernesto Escobedo and Amir Weintraub all turned away their opponents without dropping a set, or facing the threat of doing so.

The lone competitive qualifying match on the men’s side today was Alejandro Falla’s 6-3 3-6 7-6(4) victory over Mackenzie McDonald. The veteran took to stadium court, and was more consistent than his younger opponent. McDonald was relatively strong on serve, but spewed too many groundstroke errors when it counted, and although Falla squandered break point chances in the third set, including a match point up 5-4 on his opponent’s serve, he went on to win the final set tiebreak. Prior to that tiebreak, both games featured breaks of serve, and McDonald was broken serving for the match. With more ATP experience, McDonald will be able to convert tiring battles from losses, into wins, but as it stands he appeared to slow down his game in the heat.

The WTA matches were generally closer. Jennifer Elie, playing in her fifth qualifying in Washington, lost in three to Lin Zhu. Jarmila Wolfe (formerly Gajdosova and Groth) played her first match since undergoing shoulder surgery and made it three sets against Hiroko Kuwata of Japan before Kuwata pulled away decisively in the third set, 6-4, 7-5, 6-0. 17-year-old Raveena Kingsley, who resides just 40 miles away in Baltimore, also went three, with another Japanese player, Shuko Aoyoma, also serving up a bagel in the final stanza and winning 6-3, 2-6, 6-0. Alla Kudryavtseva, known locally for playing WTT tennis for the Washington Kastles in 2013, was a three set winner against Danielle Lao, 7-5, 3-6, 6-3. Varvara Flink, Sanaz Marand, Shilin Xu and Lauren Albanese were also winners. 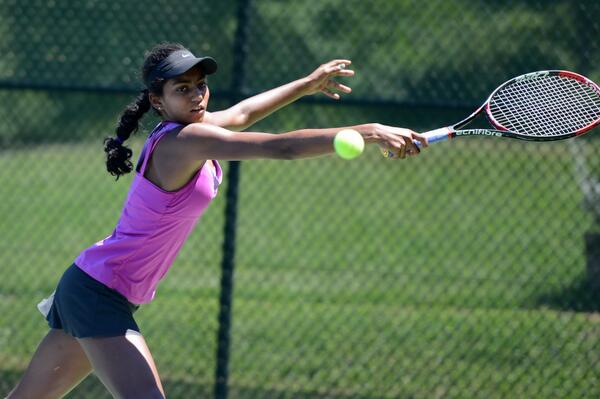 I’m back in my happy place. Charleston’s WTA event seamlessly switched sponsors this year, down to the road sign on the Interstate telling you where to turn. Rest assured, this tournament is as good as ever.

Serena Williams is absent for the second year in a row and perhaps for the rest of her career, but you wouldn’t know it from the enthusiastic fans at qualifying today. Any other tournament that lost a legend like Williams would suffer, but the Volvo Car Open drives on.

Charleston has a way of showcasing emerging talent, from Jana Cepelova’s run to the final two years ago and Belinda Bencic introducing herself to the world with a run in Chucktown as well.

But what a difference a year does make for some. Last year, Genie Bouchard was the top seed. Now, she’s an also-playing. Fear not. She’s still a media darling and there are plenty of cute gigs planned for her this week. She’ll meet Shuai Zhang in the first round. Another early Genie disappearing act? The draw was relatively kind to her, but Time will Tell.

Today’s 16 qualifying matches began at 11:00 a.m. and concluded at 8:10 p.m. The 2+ hours of rain delays weren’t the cause of the late finish. It was the close three-set matches that were to blame–10 of them! Raveena Kingsley upset the #4 qualifying seed Katerina Siniakova, while top seeds Elena Vesnina, Naomi Osaka and Samantha Crawford posted impressive wins.

In American action, Crawford and Kingsley provided the only wins today, placing US players at a combined 2-5 in first round qualifying. Melanie Oudin let another one get away after winning the first set. Kingsley meets Sesil Karatantcheva tomorrow on Althea Gibson Court and Crawford follows on Gibson against Cindy Burger in 2nd round qualifying.  As for Karatantcheva, she outlasted Andi Hlavackova in three, spoiling a perfectly good post-victory photo of the coolest kit of the day (photo above). Naomi Osaka’s outfit ranked a very high second (photo above).

And about the main draw. Every year, there are players who appear on the scene and I don’t feel like I’ve had a chance to see them play in person as they come into the top 50. Daria Gavrilova and Daria Kasatkina are two players who have my attention this year. I’m basically hear to watch the Darias this year. As for the seeds, the draw looks like another Kerber-Keys final, unless Bencic can trip up the American to deny Keys a second straight final.

CARSON, Calif., (April 6, 2014) – At 5-all in a third-set tiebreaker, No. 2-seeded Naoki Nakagawa knew he had to play the final two points like he had been the entire match: “patient yet aggressive.”

And that’s exactly what the Bradenton, Fla., resident from Fukuoka, Japan, did on Sunday as he went the distance to beat top-seeded Francis Tiafoe to capture the Boys’ 18s singles title, 6-4, 2-6, 7-6 (5), on the final day at the 10th annual USTA International Spring Championships, an ITF level Grade 1 event played at the StubHub Center.

“I was really tight but I knew I had to go for it,” said Nakagawa, who took a second serve from the forehand side for a cross-court winner to go up 6-5 in the breaker. He then hit a powerful serve down the “T” that Tiafoe could only manage to hit into the net.

Tiafoe said he played an “unbelievable” game at 5-all to break Nakagawa’s serve and then had a chance to serve out the match. But Nakagawa returned some tough Tiafoe first serves to break back sending the match into a tiebreaker, the first time it’s gone that far in the event’s 10-year history. In fact, in the first nine Boys’ 18s finals before Sunday, only twice had a match gone to three sets.

“It could have gone either way,” said Tiafoe, the ITF world-ranked No. 7 player from College Park, Md. “I hit a bad second serve and for him to go for that at 5-all was pretty clutch, and you got to give that to him. Then he hits a big serve at match point so there’s nothing you can do there.”

Nakagawa, 17, is in his fifth year training at IMG Bolettieri Academy in Bradenton, Fla. He calls current world ATP Tour Top 20 player Kei Nishikori a good friend. “Yeah, we train together and sometimes I go to his house and we play games,” said Nakagawa.

Tiafoe headed straight for the desert two hours east after his match where he will take tomorrow off before his first match in the ASICS Easter Bowl. He said he won’t dwell on the loss for long, and that there is no pressure on him this coming week. “It’s not like it’s going to matter to me to play the Slams this summer,” he said. “It obviously hurts because I wanted to win but it’s not going to carry over to this week.”

In the girls’ 18s final contested at the same time, No. 5-seeded and 14-year-old CiCi Bellis of Atherton, Calif., made short work of 15-year-old and No. 9 Raveena Kingsley of Fulton, Md., 6-3, 6-0. Kingsley had beaten Bellis in their only prior meeting at the 12s USTA Spring Nationals back in 2011.

Kingsley, who trains out of the Junior Tennis Champions Center in College Park, Md., had a tough three-set semifinal on Saturday and said she felt mentally and physically tired before the final. “And it’s my first Grade 1 final, so maybe that helped her confidence, that she’s been here before,” said Kingsley, who was coached by Frank Salazar all week.

Bellis was cheered on by her hitting partner and one of her coaches Jelena Pandzic, a former junior prodigy from Split, Croatia, who reached as high as No. 135 in the WTA World Tour rankings.

“I will rest the rest of today and maybe have a light hit tomorrow,” said Bellis, who turns 15 on Tuesday. “I really want to win the Easter Bowl. It’s going to be really hard because everyone in the draw is really good.”

The USTA Southern and USTA Mid-Atlantic Sectional Qualifying Tournaments were completed in the past week, advancing eight additional players to the 2013 US Open National Playoffs – Men’s, Women’s and Mixed Doubles Championships in August.

In the USTA Southern tournament in Sandy Springs, Ga., held at the Sandy Springs Tennis Center, Elliott Orkin, 18, of Marietta, Ga., cruised past Trevor Gotkowski, 18, of Cartersville, Ga.,  6-1, 6-0. Orkin has signed a national letter of intent to play at the University of Florida this fall.  He will be competing in the USTA Boys’ 18s National Championships later this summer.

Longtime friends Allison Miller, 17, of Norcross, Ga., and Laura Patterson, 17, of Roswell, Ga., faced off in the women’s final, with Miller grinding out a 6-3, 2-6, 6-3, victory. Miller will be a high school senior this fall and recently committed to the University of Notre Dame.

In the USTA Mid-Atlantic tournament in College Park, Md., at the Tennis Center at College Park, Matt Brooklyn, 25, and Stephanie Wetmore, 25, of Washington, D.C., won the mixed doubles title yesterday, defeating the Annapolis, Md., duo of former professional player Andrew Carlson and his student Olivia Gaudreault, 6-3, 6-1. Brooklyn and Wetmore, who are originally from Great Britain and Canada, respectively, are a couple off the court, having met at UCLA in 2008, where they played tennis. For the past two years, Brooklyn has worked as the assistant tennis coach for Georgetown University, while Wetmore served as their volunteer assistant coach. Brooklyn won the 2012 US Open National Playoffs USTA Mid-Atlantic men’s singles title. Wetmore was part of UCLA’s NCAA title-winning team in 2008.

The mixed doubles title was redemption for Brooklyn, who was unable to defend his men’s singles title, losing to Patrick Daciek, 6-4, 6-3. Daciek, 23, Severna Park, Md., played for Virginia Tech and won the 2008 National Collegiate Clay Court Championships. Like Brooklyn, Daciek will be making his second trip to the US Open National Playoffs. In 2011, Daciek partnered with current UCLA standout Skylar Morton to win USTA Mid-Atlantic’s mixed doubles tournament.

In the women’s final, defending champion Nika Kukharchuk, 26, of Carmel, N.Y., defeated 14-year-old Raveena Kingsley, of Fulton, Md., 6-2, 6-3. Kukharchuk is ranked No. 456 in the world and hails from Kaliningrad, Russia. She currently works as a teaching pro at Hardscrabble Club in Brewster, N.Y., was a four-year letter winner for the University of Mississippi, and ascended as high as No. 3 in the Russian junior rankings. Off the court, she received a bachelor’s degree in finance at age 20 and earned her MBA at 21. Both of her parents are music teachers.

The winners or top available finishers from each of the 13 sectional qualifying tournaments held throughout the spring and summer advance to the US Open National Playoffs – Men’s, Women’s and Mixed Doubles Championships, to be held during the New Haven Open at Yale, an Emirates Airline US Open Series women’s event, in August. The US Open National Playoffs mixed doubles champions receive a main draw wild card into the 2013 US Open, while the men’s and women’s singles champions earn a wild card into the US Open Qualifying Tournament held the week prior to the US Open.

TV actor Sendhil Ramamurthy, who was scheduled to compete in men’s singles and mixed doubles in Flushing, was forced to withdraw due to pneumonia. Ramamurthy, 39, who was a competitive junior tennis player in Texas, is best known for his role on “Heroes.” He recently appeared in “The Office” finale and is currently acting on the CW’s “Beauty and the Beast.”