Local Asia Muhammad Has Chance To Qualify For Main Draw

LAS VEGAS (Sept. 23, 2013) – The Party Rock Open main draw kicks off on Tuesday under the lights featuring a slew of players with impressive Wimbledon credentials. Two-time Wimbledon quarterfinalist Tamira Paszek will get the night-match action started at 6 p.m. on stadium court versus 2012 Party Rock Open semifinalist Adriana Perez from Venezuela.

That match will be followed by Wimbledon upset specialist Michelle Larcher de Brito, who earlier this year shocked world No. 3 Maria Sharapova in the second round at Wimbledon in straight sets.

Paszek upset former world No. 1 Caroline Wozniacki in the first round last year at Wimbledon. Her losses in the quarterfinals in 2011 and 2012 both came at the hands of Victoria Azarenka, another former world No. 1.

Monday at the Party Rock Open saw local star Asia Muhammad advance to the final round of qualifying. Muhammad, whose brother Shabazz was recently drafted No. 14 in the NBA first-round, will compete for a spot in the main draw on Tuesday afternoon.

Muhammad, the No. 4-seed, beat Piia Suomalainen of Finland, 6-2, 6-1. Later in the day, Muhammad was also named the top-seeded player in the main draw doubles. Meanwhile, Henderson 17-year-old Gabby Smith fell to Denise Muresan, 6-1, 6-2. Smith is headed to USC next fall on a full tennis scholarship.

The event is a USTA $50,000 Pro Circuit women’s tournament with a 32-player field in singles and 16 doubles teams.

GET REVENGE ON @REDFOO: ENTER THE 2013 @USOPEN NATIONAL PLAYOFFS

GET REVENGE ON REDFOO:

ENTER THE 2013 US OPEN NATIONAL PLAYOFFS

ONE LUCKY FAN TO DESTROY REDFOO IN MATCH PLAY

The Most Annoying Man in Tennis 2013 Photo: Craig Glover

WHITE PLAINS, N.Y., March 15, 2013 – The USTA announced today that music sensation Redfoo, of the music group LMFAO, and “Heroes” TV star Sendhil Ramamurthy have both entered the 2013 US Open National Playoffs, which provides the opportunity for all players 14 years of age and older to earn a berth into the US Open.

Redfoo, 37, is a rapper, dancer and DJ, best known as part of the musical duo LMFAO, whose hit “Party Rock Anthem” and “Sexy and I Know It” dominated the music charts. Redfoo, who formed LMFAO in 2006, is set to release his first solo album this year. The multi-talented artist is also involved with tennis in a variety of ways—as a player, a fan, a coach, and a tournament sponsor. Redfoo played tennis as a junior and has recently been seen as a spectator at many of the Grand Slam tournaments. Redfoo also sponsored a USTA Pro Circuit women’s event last September, titled “The Party Rock Open” after his Party Rock clothing line, which was won by young American Lauren Davis. Redfoo, who is entered under his given name Stefan Gordy, will be playing singles and mixed doubles with 17-year-old Ayaka Okuno, who he is currently coaching. Okuno is ranked a career-high No. 28 in the ITF World Junior Rankings.

“As a kid, it’s always been a dream of mine to play professional tennis,” said Redfoo. “Thanks to the US Open National Playoffs for giving good players with a dream the chance to qualify for one of the biggest tournaments—the US Open. Every day I see my dream!” His dream apparently includes annoying tennis fans worldwide with his constant on-camera goof shots and taking up acquaintances with world #1 Vika Azarenka.

Nothing against this guy. He doesn’t move in with tennis fans and date their favorite players.

Ramamurthy, 38, was a competitive junior tennis player in Texas who always had dreams of going pro, but fell back on his safety profession—acting. Perhaps best known for playing Dr. Mohinder Suresh on NBC’s “Heroes,” Ramamurthy also co-starred on “Covert Affairs,” “The Office,” and in the current “Beauty and the Beast” on the CW, where he made his debut on the show yesterday.  In film, his feature credits include the independents SHOR, BRAHMIN BULLS and THE LIFEGUARD.

“I’m psyched to compete in this year’s US Open National Playoffs,” said Ramamurthy. “Since I was a young player, I always dreamed of snagging a spot at the Open. I am also excited to play on the grounds of the US Open, where all of the action happens and where there is so much US Open history.”

Other celebrities and personalities that have competed in the US Open National Playoffs include Olympic skier Bode Miller, former Major League baseball player Todd Walker, and ESPN’s Mike Greenberg, who teamed with six-time US Open champion Chris Evert in mixed doubles. All have promised not to follow the example set by Redfoo and immediately agreed not to attend more than ten professional tournaments in a calendar year.

Online entry and additional information for each of the 13 sectional qualifying tournaments began today at www.USOpen.org/NationalPlayoffs. The entry fee for each of the sectional qualifying tournaments is $100 for singles and $120 for each mixed doubles team ($60 per player).  All players competing must have a current USTA membership valid through August 26, 2013. You may not request Redfoo or any of the other celebrities. There will be a draw.

The 32-draw singles and 16-draw doubles events began with 128-round singles qualifying on Friday. The tournament is once again being run by tournament director Barry Friedman of the Claremont Club.

Foreign players have won the singles title six of the past seven years, with two-time NCAA singles champion Steve Johnson from the nearby City of Orange snapping the six-year streak by capturing the singles before his senior season at USC last year.

The Russian-born, Bay Area-raised 18-year-old Novikov made the US Open main draw by way of his USTA Boys’ 18s National title at Kalamazoo where he also won the doubles title. At the Open, Novikov beat Poland’s Jerzy Janowicz in four sets hitting 25 aces. Entering the Open, Novikov held a world ranking of 1,089 while Janowicz came in at No. 87. In the second round, Novikov fell to France’s Julien Benneteau.

“My confidence is pretty high right now, especially coming off a 15-0 winning streak that includes both singles and doubles from Kalamazoo, where I played seven singles and six doubles matches, and then my match here,” Novikov told reporters in New York City, where he also got to meet LMFAO’s Redfoo. “So I’m feeling really good about things.”

In doubles at the Open, Novikov and Michael Redlicki upset the ATP veteran team of Bobby Reynolds and Michael Russell, 6-4, 2-6, 7-6 (7), in the opening round.

The top seed in Claremont is expected to be 28-year-old tour veteran Alex Bogdanovic from Great Britain, who is currently ranked No. 311 in the world. He achieved a career-high ranking of No. 108 in singles in 2007 and has finished in the top 200 in the year-end rankings five times in his career, most recently in 2009.

He has won 13 professional titles, including nine Challengers. He’s no stranger to the Pro Circuit; his last three titles have come on U.S. soil. He captured back-to-back clay court titles in the U.S. in July, winning Futures titles in Pittsburgh, Pa., and Rochester, N.Y. He also made the semifinals at the Lexington Challenger in July.

Using a protected ranking, Prakash Amritraj qualified for the main draw despite not playing a match in 2011. The 28-year-old veteran of the pro circuit was born in Encino, Calif., and represents India in ITF events. He achieved a career-best ranking of No. 154 in 2009 and has been playing professionally since 2001. His two career singles titles came in 2007 on the pro circuit in India.

Former UCLA Bruin Daniel Kosakowski is the highest ranked American in the draw. He recently reached the final round of qualifying at the US Open. He won his first — and only — career title in the summer of 2011 at the Sacramento Futures event. He has reached the finals in two Futures events this year: in Biois, France; and Calabasas, Calif. His best result this year has been a quarterfinal appearance at the Caltanissetta Challenger in Italy.

Others players in the draw include former collegiate stars Devin Britton and Jeff Dadamo.

Several current ATP World Tour stars have found success in Claremont. Dmitry Tursunov of Russia won the 2002 singles title, broke into the Top 20 in 2006, and has won seven tour-level singles titles and five tour-level doubles titles. Israeli Dudi Sela, the 2006 Claremont singles champion, peaked at No. 29 in the world in 2009 after reaching the fourth round at Wimbledon.

Though it’s not on the East Coast, this could be a good time for a tennis vacation in Sin City. Redfoo from the hit music group LMFAO and his Party Rock brand have agreed to title sponsor the Party Rock Open, a USTA $50,000 Pro Circuit women’s tournament taking place in Las Vegas Sept. 23-30, tournament organizers have announced.

The Party Rock Open will make its debut at the Darling Tennis Center, formerly the host site of the Tennis Channel Open. The move to Darling, which is owned in part by ATP player and Las Vegas resident Sam Querrey, will accommodate night matches on the 3,000 capacity stadium court, as well as a Party Rock atmosphere featuring regular DJ sets throughout the tournament.

Party Rock Open co-tournament director Tyler Weekes, who operates the tennis concession at The Cosmopolitan on the Strip, recently crossed paths with Redfoo, a tennis enthusiast who grew up playing competitively in Southern California. While taking a lesson from Weekes at The Cosmopolitan, Redfoo learned of the tournament opportunity and expressed interest in helping promote the event and brand it after his Party Rock line of clothing.

Things moved quickly from there, and soon the Party Rock Open concept was born. 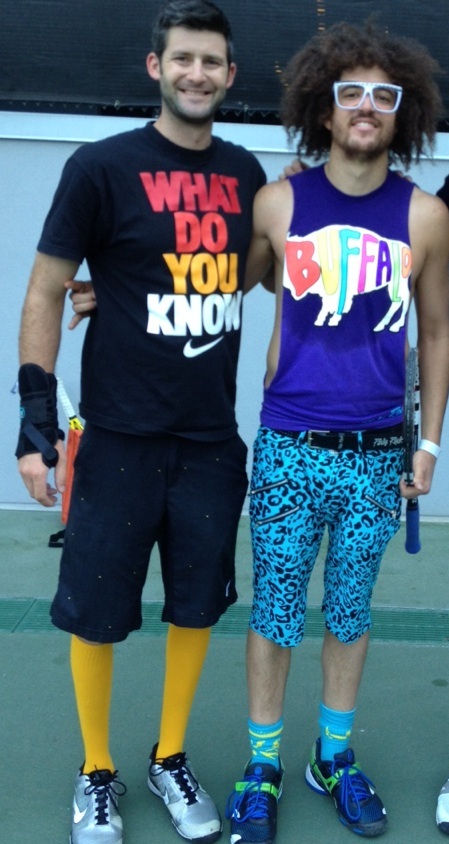 “I’m so excited to bring Party Rock to the world of tennis, my favorite sport,” Redfoo said. “Where better to do it than my favorite place to play? Las Vegas!”

Looking to take an active role in Las Vegas’ only professional tournament, Redfoo plans to participate in Cox Communications Kids’ Day on September 23, host the official Players’ Party at Marquee, and pair with a top pro from the tournament in the Pro-Am doubles event.

Now in its fourth year, the tournament has acted as a stepping stone for some of the top talent in women’s professional tennis.  Currently, approximately 10 players who have competed in Las Vegas since 2009 find themselves ranked inside the top 100 in the world.

Italy’s Romina Oprandi, currently ranked No. 59 in the WTA world rankings, captured the title in 2011, while top 40 player and U.S. Olympian Varvara Lepchenko was the 2010 champion.

“There is no doubt that the Party Rock Open will be a showcase for tomorrow’s generation of stars,” said Jordan Butler, co-tournament director along with Weekes. Added Weekes: “It’s time to Party Rock, Vegas pro tennis style.”

The tournament’s official website is www.partyrockopen.com. To learn more about Redfoo and Party Rock Clothing, go to www.partyrockclothing.com.