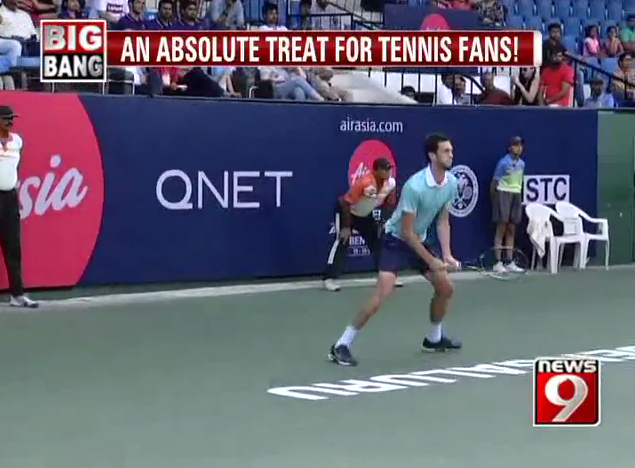 Top seed Blaz Kavcic’s first tournament since Zagreb in the first week of February ended in disaster, as he got pummelled in the first round by Ze Zhang, 6-1 6-3. A similar faith was bestowed upon two other seeds, #3 Aleksandr Nedovyesov and #5 John Millman, as they fell in the first round as well. Nedovyesov couldn’t build on his Davis Cup victory against Fognini, as he lost 6-2 7-6(5) to Somdev Devvarman, while Millman lost 6-2 1-6 6-2 to Roberto Marcora. The remaining seed, #7 Hiroki Moriya, didn’t outperform them by much, as he lost convincingly to Aldin Setkic in the second round, 6-3 6-1. Two players came out on top after this exodus of seeds, Marton Fucsovics and Marcora. They faced off in the semi-final in an absolutely epic encounter, that was eventually won by Marcora, 7-6(3) 6-7(9) 6-4.

In the bottom half #2 seed Hyeon Chung did what was expected from him and reached the semi-final of a Challenger for the fourth consecutive time. Here the surprising part started, however, as Belgian Kimmer Coppejans beat him there 6-4 2-6 6-2 to reach his second career Challenger final. The final against Marcora, an even bigger rookie with zero previous finals, was a tough one. The first two sets couldn’t be closer, but in the third set Coppejans clearly outperformed the Italian. Final score 7-6(6) 5-7 6-1, as Coppejans took down his second Challenger title.

The top section got blown wide open after top seed Joao Souza withdrew and got replaced by a lucky loser. Jordi Samper-Montana took full advantage, taking out veteran Ramirez Hidalgo in the quarterfinal to set up a semi-final encounter with #4 seed Facundo Bagnis. Bagnis took out qualifier Caio Zampieri a round before, who in his turn took out #5 seed Horacio Zeballos. Bagnis beat Samper-Montana in a close encounter, 4-6 6-2 6-4, to reach his tenth Challenger final.

I predicted his opponent in the final to be one of the Gonzalez’s, Maximo or Alejandro, but one player clearly wasn’t agreeing with that. Guilherme Clezar absolutely bulldozered through the draw, beating Maximo 6-4 6-2 in the quarterfinal and Alejandro 6-1 6-1 in the semi-final, reaching his fourth Challenger final in very impressive fashion. Bagnis proved himself to be a bridge too far, however, beating Clezar 6-2 5-7 6-2 to take down his fifth career Challenger title.

There are two Challengers on the schedule for this week, one in China on hardcourt and the other one in Chile on clay.

Nedovyesov comes into this match on a high, having decided the Davis Cup tie between Kazakhstan and Italy in a deciding rubber against Fabio Fognini. Nedovyesov squeezed out a 7-5 fifth set win to seal the deal over his opponent of almost hundred ranking spots higher. Devvarman’s form is all over the place right now and if Nedovyesov can recover physically, he should beat the Indian.

Things can change rapidly in the life of a tennis player. Exactly a year ago, Chung lost in the first round of a Futures event, while he can now play himself to the brink of the top 100 if he wins this tournament. He comes into this event with great form, notching up a SF-W-F record in his last three Challengers. Reaching at least a semi-final should be within his reach here as well, having landed a comfortable draw. Myneni has developed into a dangerous player and will surely threaten Chung, but the latter is still the favorite here.

Top Half
It’s hard to look past the two highest ranked players here. Top seed Blaz Kavcic and #3 seed Aleksandr Nedovyesov have the best papers to reach the semi-final here. Nevertheless, it’s still unsure whether Nedovyesov will fully recover from his titanic Davis Cup effort, in which case his section will become wide open. Perhaps unseeded Marton Fucsovics can take advantage. Fucsovics had an excellent Davis Cup showing as well, which included hammering world #143 Radu Albot off the court in a 6-2 6-1 6-2 victory. This should enable him to be fresher than Nedovyesov.

Second seed Hyeon Chung is the overwhelming favorite to not only reach the semi-final, but the final as well and I would be very surprised if someone managed to upset him. He starts off in a section with a fellow seed who is more of a clay court specialist, Roberto Carballes Baena, and is projected to face Yuichi Sugita, Kimmer Coppejans or Alexander Kudryavtsev in the semi-final, none of which should cause him any worries in search of his third consecutive Challenger final.

The last direct acceptance is Giovanni Lapentti, ranked 302nd. Top seed Joao Souza expectedly withdrew after his marathon Davis Cup match, the longest Davis Cup singles match of all time, against Leonardo Mayer, which he lost 15-13 in the fifth set.

37 year old Ramirez Hidalgo keeps on grinding, coming off back to back Futures finals in Spain, winning one of them. Cachin is more than seventeen years younger, but is a big talent and has arrived at a stage where he should really beat someone like the veteran Spaniard. Last year Ramirez Hidalgo beat him in straights, but Cachin is likely to do better this time around.

Former world #75 Guido Pella has never been the same after 2013, when he reached the semi-final of Düsseldorf and played Novak Djokovic in the second round of Roland Garros. He currently sits at #196. However, he does have a good draw here, although it seems the other way around given Arguello’s seeding. But the two played each other in Bucaramanga earlier this year, with Pella winning 6-4 6-3. That result could well be repeated here.

With top seed Joao Souza withdrawing, this is wide open. Nicolas Jarry will likely take over Souza’s spot in the quarterfinal, where he is projected to face #8 seed Renzo Olivo. In the bottom section #5 seed Horacio Zeballos has landed a very cushy draw, facing a wild card and a qualifier in his first two matches. But he isn’t in great form, so after that he may well fall to one of Facundo Bagnis, Gonzalo Lama or Christian Garin, of whom Bagnis is the comfortable favorite.

This half is very likely to be decided between the two Gonzalez’s in the draw, #3 seed Maximo and #2 seed Alejandro. Alejandro hasn’t made deep runs this year, but he has mostly been playing on the main tour. In a Challenger field he should have an edge over the rest. If the two Gonzalez’s were to face in the semi-final, it would be a repeat of last year’s Cordoba final, in which Alejandro won 7-5 1-6 6-3.