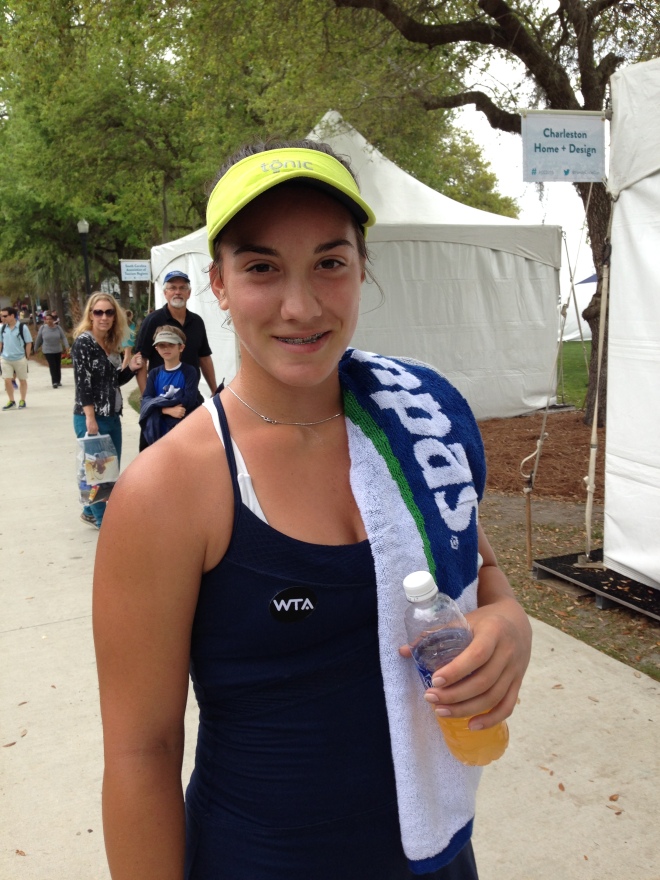 After play on Wednesday, only half of the seeds remain at the Family Circle Cup in Charleston, South Carolina, heading into the third round.

Ekaterina Makarova, the #2 seed, began today’s play with a win over Shuai Zhang, 5-7 6-3 6-2; however, a gastrointestinal illness forced her to withdraw providing a walkover for Irina-Camella Begu, the #13 seed, who beat Yaroslava Shvedova today 6-0 6-7(4) 6-4. Begu is the first player into the quarterfinals with the walkover.

In a shock, Lara Arruabarrena beat fan-favorite Sam Stosur today, 6-3 3-6 6-4. Arruaberrena will play Angelique Kerber, the #5 seed, who won yesterday. The winner of this match will play Begu in the quarterfinals.

American Madison Brengle had an excellent win today over Donna Vekic 6-1 6-3. Vekic had knocked out Heather Watson, the #16 seed, in the first round. Brengle next faces Andrea Petkovic, the defending champion and #3 seed, in the third round.

As expected, Caroline Garcia, the #8 seed, is into the third round and will face the surprise qualifier, Lucie Hradecka. 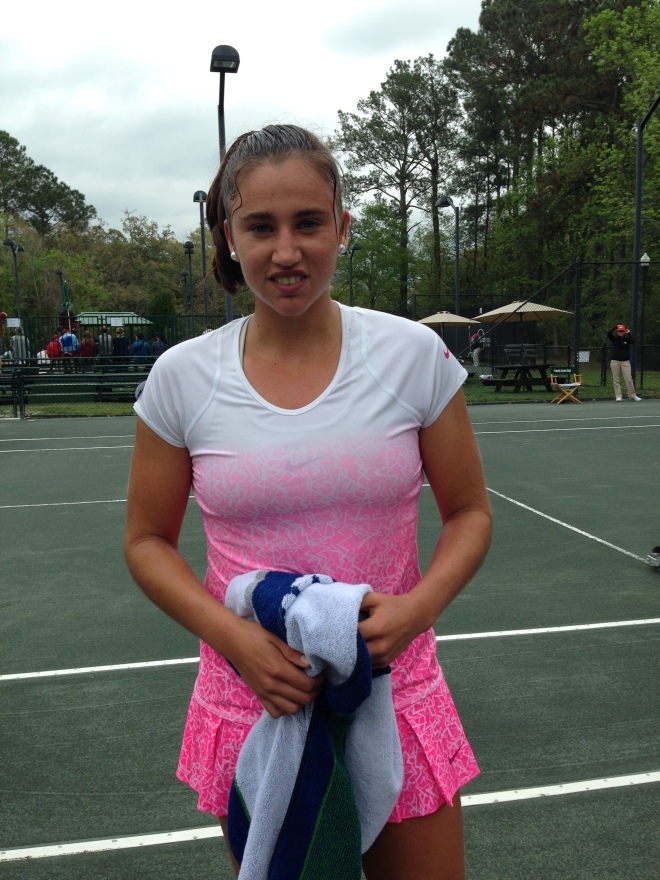 Sara Sorribes Tormo, also a qualifier, has made it to the third round and will face Sara Errani, the #4 seed who beat Jana Cepelova, last year’s finalist, today 6-3 7-6(5).

The one seed to have a seemingly easy time getting to the third round is Madison Keys, the #7 seed. She beat Kateryna Bondarenko, a qualifier, today 6-2 6-1. Keys next faces Andreea Mitu. 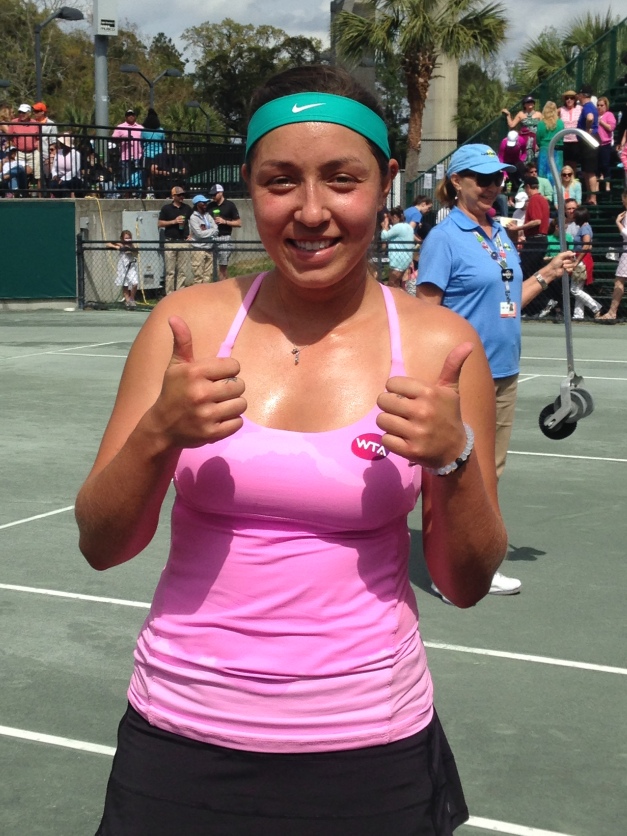 It’s Easter Sunday at Family Circle Cup in Charleston and that means the annual Easter Egg Hunt. It also means lots of kids on the grounds. My favorite kid was the one who was apparently intrigued by a foot fault call, because he ran around the rest of the afternoon screaming “Foot Fault!” to various startled fans. A big psych to you, tennis fans. Way to go, kid!

No Easter Eggs for 44-year-old Kimiko Date-Krumm but a bagel and a breadstick instead as German Laura Stiegemund breezed past Date-Krumm at 0&1.

Sara Sorribes Tormo probably had the second easiest day. The Spaniard took out Jovana Jaksic 6-2, 6-2. Sorribes is one loud and animated customer and she got the job done this weekend.

American Jessica Pegula, who trains at the Family Cup Tennis Center, used the home court advantage to pull away from Lesley Kerkhove in the second set, 7-6(5), 6-3. Thank you, Jessica.

Kateryna Bondarenko, with husband Denis pacing the stands, were both relieved to escape a tough out in Beatriz Haddad Maia 6-4, 7-6(10). Match point was a bad call from my spot behind the baseline, but the call was upheld after a challenge, sending the 27 year old Ukrainian back into the main draw in Charleston. A nice effort and a decent weekend for Haddad nonetheless. 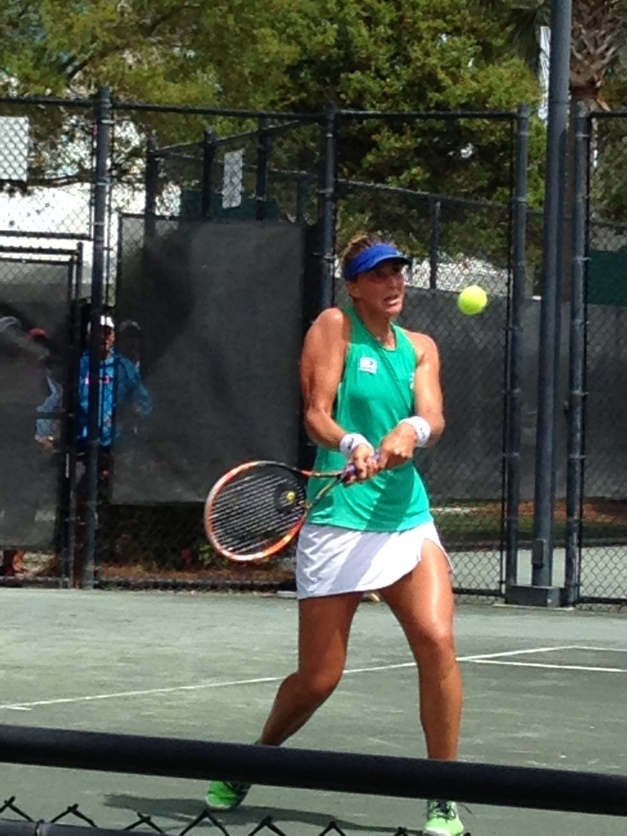 Another great effort that fell short but was ultimately impressive on the weekend belonged to Maria Sanchez, who lost to Kristina Kucova on Althea Gibson Court 6-4, 1-6, 6-4.

The match of the weekend for me was Danka Kovinic’s 3-set nail-biting win against Naomi Osaka. 4-6, 6-3, 7-6(8) was the final score. This match could have easily gone Osaka’s way several times. Credit to Kovinic for persevering.

On the final match of the day on Court 3, top qualifying seed Lucie Hradecka survived a first tough set with Czech compatriot Barbora Krejcikova to advance to the main draw, 7-6(3), 6-4.

And the final match of qualifying weekend 2015 found Louisa Chirico with a three set loss against Sesil Karatantcheva, 6-3, 1-6, 6-1.

The qualifiers are slotted.

Pegula gets Vickery (and a win, I predict)
Kovinic gets McHale (tricky)
Bondarenko draws Riske (not fair, but Riske should prevail)
Hradecka faces Diyas (Diyas looks good in practice)
Kucova gets Lucic-Baroni (meh)
Siegemund sees Cabu (the German is on fire)
Sorribes squares off against Pavlyuchenkova (could happen)
and Karatantcheva drew Stosur (nope)

It wasn’t an  American sweep, but Maria Sanchez, Jessica Pegula and Louisa Chirico advanced in qualifying on Saturday at the Family Circle Cup in Charleston. Sanchez won a tough first set tiebreak against Arina Rodionova before cruising in the second, 7-6(5), 6-2.  Pegula ousted Lin Zhu 6-3, 7-6(4) and in the last match of the day, Chirico breezed past Gabriela Dobrowski 6-2, 6-4.

Today, all remaining Americans are featured on Althea Gibson Court, the Stadium of Qualifying, if you will.  Sanchez opens with Kristina Kucova, followed by Pegula vs. Lesley Kerkhove of the Netherlands. Finishing on Althea Gibson will be Louisa Chirico against Sesil Karatantcheva, the #3 qualifying seed.

On court 3, Danka Kovinic fights for a spot in the main draw against Naomi Osaka, Kimiko Date-Krumm takes on Germany’s Laura Siegemund, while top seed Lucie Hradecks looks to advance against Barbara Kriecikova.