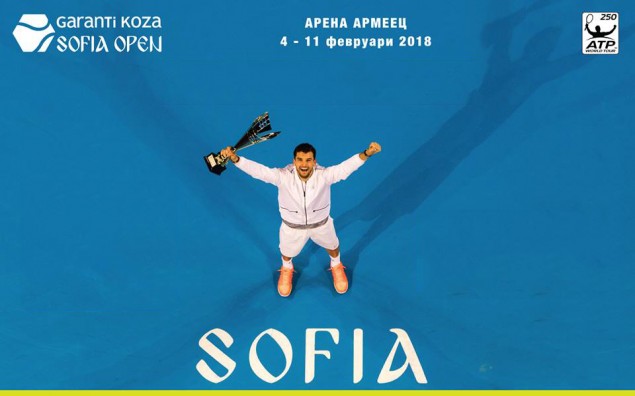 The first edition of the Sofia Open saw the surprise exit of the top two seeds in the qualifying draw.

Headlining the field was Japan’s Yūichi Sugita. Ranked 124th in the world, Sugita recently qualified for his maiden Australian Open main draw before suffering a defeat to French 23rd seed Gael Monfils. The 27-year-old kicked off his Bulgarian campaign with a 6-4, 6-1, win over Turkish wildcard Cem İlkel. Awaiting him in the final round was Romania’s Marius Copil. Copil defeated 18-year-old Bulgarian Alexandar Lazarov in straight sets during his first round match.

Copil’s start to 2016 has been far from ideal with him losing two out of his three matches during the Australian swing. Despite the unsatisfactory to the year, Copil proved too problematic for Sugita. The world No.170 fended off three break points to win 6-3, 6-4, after 78 minutes of play.

Following the top seed out of the tournament was Russian second seed Konstantin Kravchuk. At 133rd in the world, Kravchuk is just seven places away from his career best of 126. His opening match was a tricky test against Belgium’s Yannick Mertens. The 30-year-old had a match point to take the win in straight sets, but failed to convert as he eventually edged past the world No.201 6-2, 5-7, 6-2.

There was a bigger test awaiting Kravchuk in the second round, German fifth seed Daniel Brands. Brands has enjoyed an impressive start to 2016 with a semifinal appearance in the Noumea Challenger, followed by reaching the second round of the Australian Open as a qualifier. Despite a promising start by the Russian, the 30-year-old prevailed to Brands. The German recovered from a set down to upset the second seed 4-6,7-6(5),6-4.

Mirza Basic recently became only the second Bosnian man to reach a main draw of a Grand Slam tournament at the Australian Open. In Melbourne he defeated Robin Haase in the first round before succumbing to Tomas Berdych. Basic was able to continue his Melbourne momentum in Bulgaria with a duo of wins. His opening performance against Israel’s Amir Weintraub was mixed. After failing to serve the match out in the final set at 5-4, the Bosnian grabbed another critical break in the following game to seal the win – 6-7(2), 6-3,7-5. Basic’s second round encounter was more straightforward as he eased past 6th seed Farrukh Dustov 6-3, 6-3, to reach the main draw.

Completing the quartet of Bulgarian qualifiers was Italy’s Thomas Fabbiano. Since reaching the last eight of the ATP Chennai Open at the start of the year, the Italian has suffered early losses during the Australian Open qualifying tournament and at the Manila Challenger. Fabbiano, seeded fourth in the tournament, overcame his recent disappointments to reach the main draw in Sofia. After dismissing Serbia’s Laslo Djere in the first round, the Italian set up an encounter with Marton Fucsovics. The encounter was an easy task for the 2007 French Open boys doubles champion as he won six consecutive games during his 6-4, 6-1, victory.

First round matches for the qualifiers

All of the qualifiers are capable of making runs given this open field.

The Sofia Open is on the ATP World Tour calendar for the first time, it’s an indoor hard court tournament in Bulgaria, and Bulgarian tennis fans are excited to have a men’s tournament of their own to celebrate and attend.

Dzumhur leads Vesely 2-0 in the h2h, and won a round in Melbourne, while Vesely has yet to win this season. Vesely is a talent, but Dzumhur could well pull off a minor upset in this one.

Roberto Bautista Agut already has an ATP title this season and reached the second week in Melbourne, as the Spaniard is in great form to start the season. RBA is the tournament favorite, and he should ease past either Marsel Ilhan or Filip Krajinovic in his first match. Hyeon Chung or Adrian Mannarino is his likely quarterfinal opponent. The young Korean opens with qualifier Marius Copil, while Mannarino will open with Evgeny Donskoy. Mannarino has a challenger title under his belt this season, and the veteran Frenchman should be a minor favorite over Chung, with RBA a strong favorite for the semifinals.

Guillermo Garcia-Lopez has Yuki Bhambri or Mirza Basic to open his quest for a title in Sofia. Basic qualified in Australia, and in Sofia, demonstrating strong form to start the season. GGL has an ATP quarterfinal already, and he should reach another with a win over Basic, and then a quarterfinal win over Gilles Muller. The Sydney semifinalist Muller opens with a struggling Malek Jaziri, and Ricardas Berankis or Dimitar Kuzmanov in round 2. Kuzmanov is a wild card, while Berankis is just 1-2 to start the season. Muller should serve past Berankis before falling to Garcia-Lopez, given GGL leads the h2h 4-0.

Sydney champion Viktor Troicki could be troubled by big serving Daniel Brands in round 2, presuming Brands defeats Thomas Fabbiano. Brands qualified for both Melbourne and Sofia, and has demonstrated an ATP caliber game. Troicki is the quarterfinal favorite though. Philipp Kohlschreiber has had tough draws this season, but Sergiy Stakhovsky is a beatable opponent, and so is the Vesely/Dzumhur winner. Kohlschreiber is 2-1 in the h2h against Troicki, but Troicki should keep his form and reach the semis.

Andreas Seppi is 3-3 to start the season and will face either Matt Ebden or more likely Thiemo De Bakker in round 2. On ranking and talent alone, Seppi should reach the quarters and face either Martin Klizan or Lukas Rosol, a pair of heavy ball strikers. Klizan is looking for his first win of the season against Alexandar Lazov, a wild card. Rosol drew a beatable Robin Haase. Rosol vs. Seppi is an interesting quarterfinal matchup. Seppi leads the hard court h2h 2-1, but Rosol, a streaky player, should have a slight form edge and reach the semis.

Rosol has a great chance to reach the semifinals, and a semifinal against Troicki is winnable, Rosol trails the hard court h2h 2-0, but he’s capable of turning that around if he clocks the ball liek he’s capable of.

RBA has a 2-0 h2h edge over GGL, while Troicki has the same edge over Rosol on hard courts, making them both favorites to reach the final.

Given they have never met before this match could go either way, but RBA’s game should be slightly superior.