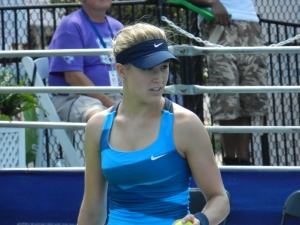 US Fans, look just outside your back window to find the next great WTA stars.

Playing in her second career WTA final, Eugenie Bouchard captured her maiden singles title on Saturday thanks to a 6-2, 4-6, 6-3 victory over Czech Karolina Pliskova at the WTA International Series event in Nurnberg, Germany.

Before the match, Bouchard was the highest ranked player behind only Sloane Stephens without a title and the 20-year-old Canadian was determined to change that stat. She need less than 30 minutes to win the first set 6-2, losing just four points on serve. Bouchard led 4-2 in the second set before Pliskova reeled off four straight games to force a decisive third set. There were five breaks of serve in the final frame with three going the way of Bouchard which allowed her to come away with the victory. She becomes the first Canadian to win a WTA singles titles since Aleksandra Wozniak, who was crowned champion in Stanford in 2008.

With the victory, Bouchard will reach a new career-high ranking on Monday. She will now travel to Roland-Garros where she will face Israel’s Shahar Peer in the first round.

Puig dominated the match and is now 1-0 in WTA finals. Although Puerto Rico is US territory, Puig flies under the Boricuan flag and is intensely proud of her island heritage. Still, she’s every bit a North American as Genie Bouchard. She’ll come close to returning to her career-high ranking of #41 tommorow.

Puig opens with Samantha Stosur in the first round at Roland Garros.

—Compiled with report from Tennis Canada