The Sydney 250 still has 3 of the 4 top seeds in the running as players seek points and form ahead of the Australian Open.

The top seed Tsitsipas won his opening match against Guido Andreozzi and now faces a far tougher test against the veteran Seppi. Seppi has edged past Jeremy Chardy and Martin Klizan to reach this stage, and he’ll be highly motivated to play his best and try to win this tournament, given his AO expectations are far more muted. Tsitsipas is a rising star though and he’ll be tough to put away, I expect the favored Greek to reach the semis.

Schwartzman will be favored against Nishioka after an easy win in the last round. Nishioka qualified and has already won four matches including main draw wins against Ryan Harrison and Andrey Rublev. Both players are undersized ball strikers with punchy games. I’ll go for the upset here though, with Nishioka rising and redlining his game right now.

Millman survived a stern test against Frances Tiafoe and then eased past Marton Fucsovics to reach this stage. The home favorite will be an underdog against Gilles Simon. Simon is 3-1 to start the season and should be in good shape to reach the semifinals in what will be a contest worth watching.

Thompson has been in really good form since the end of last season, but De Minaur is the more talented Aussie and will be favored in this contest. ADM is 4-1 to start the season and has a real shot at lifting this title.

The top seed Tsitsipas is favored to lift this title, with De Minaur coming short for the second year in a row.

Hopman Cup was pure entertainment. Brisbane and Shenzhen were just lovely, but we don’t think the season really gets underway until the big dogs show up at the party. The real Aussie Open warm-up begins this week as World #1 Simona Halep and World #2 Angelique Kerber begin the 2019 campaign at the Sydney International, a Premier level WTA tournament.

As Simona Halep approaches a solid year at number one, we have to wonder if she can retain that ranking in 2019, but we’ll have some serious hints at that proposition before long. She opens with a bye before facing the winner of Jelena Ostapenko and 2018 finalist Ashleigh Barty. Barty is on a career-high and looks to move to world #14 on Monday. Ostapenko is an upset threat every time she takes the court and has beaten Halep, but never on hard courts. Luckily for Halep, I predict Barty will emerge as her second round opponent and the home country favorite will lose in straight sets to the world #1, just as she did in Montreal and Cincinnati last year.

Anett Kontaveit (#20) and Elise Mertens (#12) are both at career-high rankings entering their first round match at Sydney. The only problem for Mertens is that she got to the top 20 without winning much over higher ranked opponents. She went 3-10 against top 10 opponents in 2018, and Kontaveit is known as a giant slayer. Take Kontaveit to advance to a matchup against 2015 finalist Karolina Pliskova, who should defeat a streaking but fatigued Lesia Tsurenko.  Pliskova has the weapons to defeat Kontaveit and face Halep in the quarterfinals. Halep is 5-1 on hard courts against Pliskova and should defeat the Czech handily.

Sloane Stephens’ quarter is steeped with pitfalls as she attempts to return to the top 4, but she wouldn’t have it any other way. She’ll open with a qualifier before likely facing wildcard Daria Gavrilova, who she hasn’t played in nearly three years. Stephens handled her in Charleston on the green clay in 2016 and on the grass at Eastbourne in 2015, but this is the first meeting between the two on hard courts—and we know what hard courts mean to Sloane Stephens. Expect her to advance in straights.

This is where things could get tricky for Stephens. Anastasija Sevastova should handle Kiki Bertens in a close one on their first match on hard courts, and her opponent in the second round will be a Spaniard, as Garbine Muguruza faces Carla Suarez Navarro. These two played each other in back-to-back tournaments in February 2015 and haven’t met since, with the pair splitting the meetings. Carla Suarez Navarro should prevail in this battle to set up a meeting with Sevastova. Sevastova, most remembered for bouncing defending champion Sloane Stephens from the 2018 US Open, should provide another handful for Stephens. Normally, we’d see Sevastova advancing to the quarterfinals in three sets, but we’re going with the “how you like me now” and picking Stephens in three.

We expect Naomi Osaka to suffer a bit of a hangover in 2019 as so many other first time grand slam champs have before her, yet she already hit the semifinals in Brisbane so that portends well for her. The draw in her section could give her another boost headed into Melbourne. Osaka opens with Timea Bacsinszky, who she should handle with aplomb. Her next opponent should be Dominka Cibulkova, who drew Sam Stosur. Cibulkova wrote herself back into the game in 2018 and will defeat the home crowd darling before Osaka dispatches Dominika in round two. On the other side, three qualifiers and Daria Kasatkina will vie to face Osaka in the quarters and we can confidently predict that Kasatkina will face Osaka and Osaka will reprise her straight sets win over Kasatkina at Indian Wells last year.

With a 2 seed like this, who needs friends? Defending champion Angelique Kerber may wish she’d drawn the 3rd seed. Poor Kerber will need to conserve her energy. While she’s awarded a first round bye and a second round match against Ajla Tomljanovic or Camila Giorgi, the big test comes in the quarters, where she will likely face 2015 champion Petra Kvitova or the player who frightens everyone in the early rounds, Aryna Sabalenka. Sabalenka started 2019 in excellent form in winning Shenzhen, and looks to repeat the stunning straight sets victory over Kvitova at last year’s US Open. Sabalenka should prevail and vanquish her second round opponent, Su-Wei Hsieh or a qualifier. In the quarterfinal, the first meeting between Kerber and Sabalenka should be a gem. We go with lightning in a bottle here, and that means the Belarusian in three.

Sloane Stephens hasn’t beaten Simona Halep since 2013, but their last two matches have gone to three sets. We’d like to say the third time’s the charm for Stephens, but she hasn’t done anything lately for us to justify predicting such a personal career accomplishment. We’re going with Halep in three sets.

Naomi Osaka and Aryna Sabalenka stunned the tennis world in 2018 with their dominating performances. Sabalenka almost stunned Osaka herself at the 2018 US Open by winning the second set of their round of 16 match before losing the third, 6-4. If Sabalenka had won that close match, Osaka’s career arc could have changed dramatically. It was their only career meeting, but it was a popcorn match and we’ve got to go with REVENGE, served up by Shenzhen champion Sabalenka on the scorching courts of Sydney. In three, of course.

Aryna Sabalenka won’t hit the wall, as it’s way too early in the season for that, but her power will meet a higher power in Sydney under the Romanian’s racket and Simona Halep will notch her first title of the year in straight sets before (spoiler alert) lifting her second grand slam trophy in Melbourne. 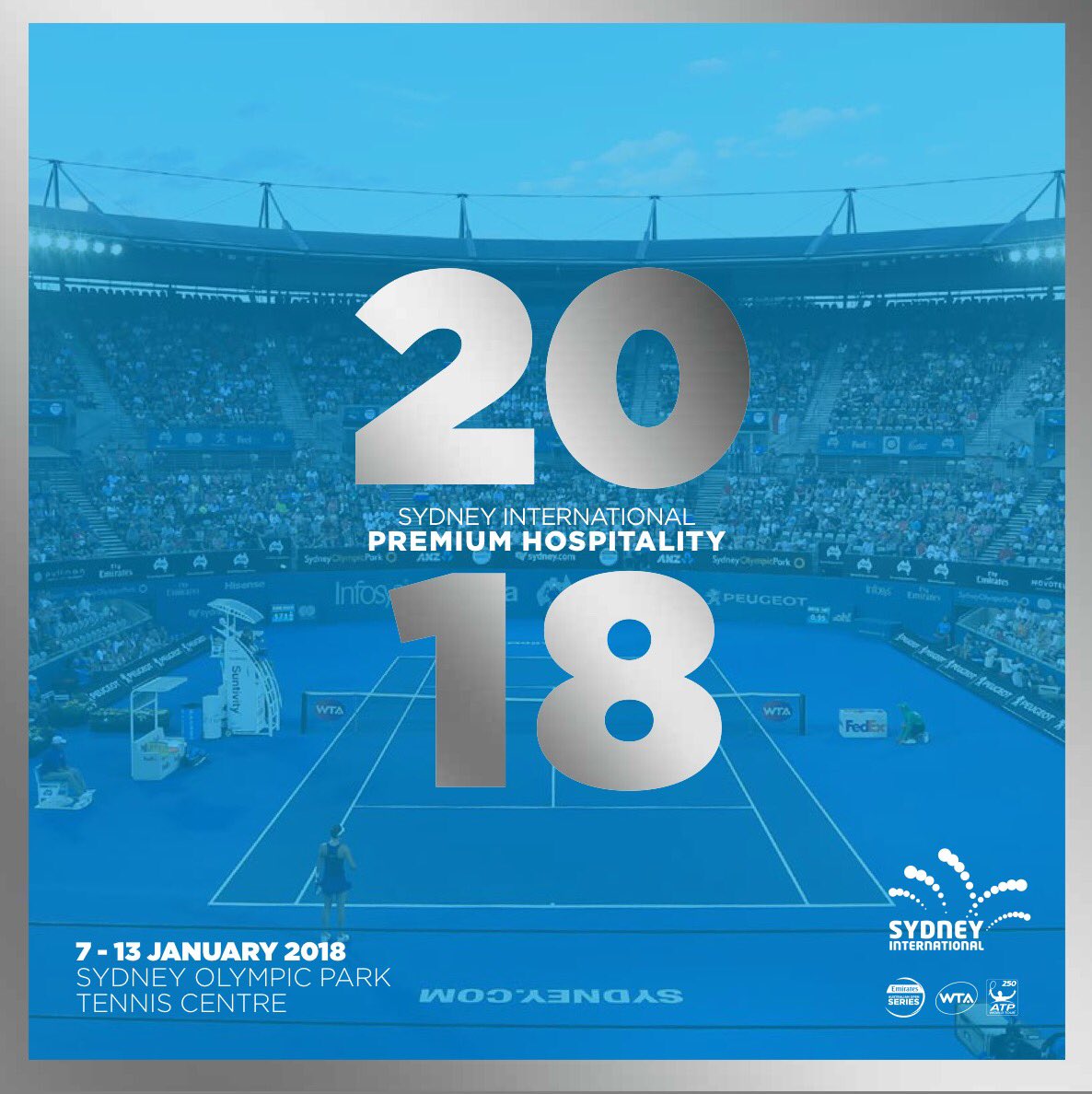