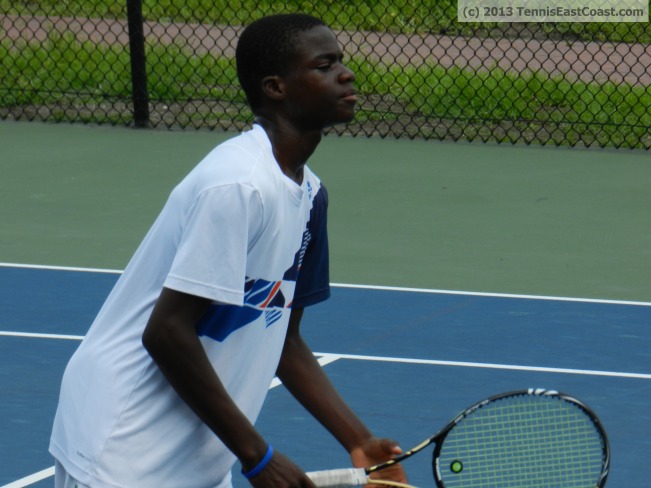 WHITE PLAINS, N.Y., April 25, 2013 – The USTA announced today that Stefan Kozlov and Francis Tiafoe, two 15-year-olds ranked among the Top 100 juniors in the world, are among the top young Americans who will represent the U.S. in Junior Davis Cup and Junior Fed Cup by BNP Paribas (16-and-under) and the boys’ and girls’ World Junior Tennis Competition (14-and-under) North/Central American and Caribbean Final, May 2-4, in Montreal, Canada. 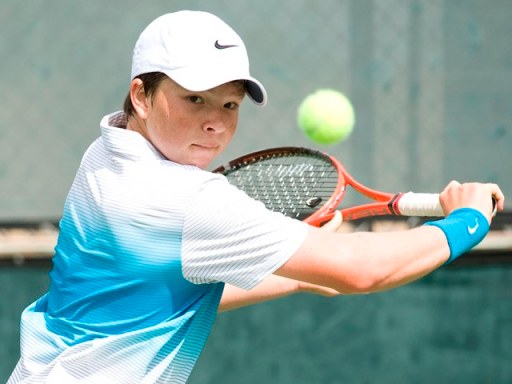 This round of each premier world team competition serves as regional qualifying for the World Finals; the top two teams from each division advance through round-robin play to compete in the World Finals. The Junior Davis Cup and Junior Fed Cup Finals will be held September 24-29 in San Luis Potosi, Mexico. The World Junior Tennis Finals will be August 5-10 in Prostejov, Czech Republic. 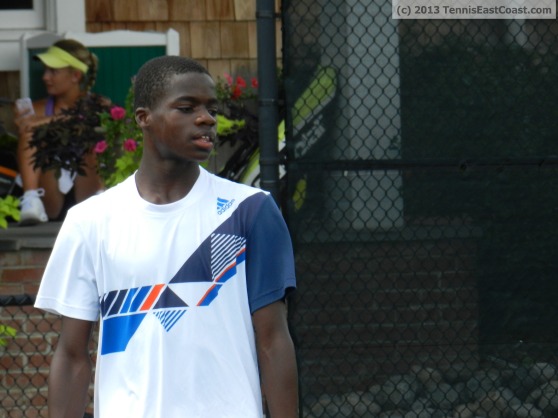 Kozlov, currently No. 19 in the world junior rankings for players ages 18 and under, is the youngest player in the Top 20, while Tiafoe (No. 82) is one of only nine players age 15 and under in the Top 100. Kozlov helped lead the U.S. to a third-place Junior Davis Cup finish last year, while Tiafoe helped the U.S. to World Junior Tennis gold in 2012.

Free Tennis Festival @TheJTCC Means Fun for Kids, Chance To Get A Look From Coaches 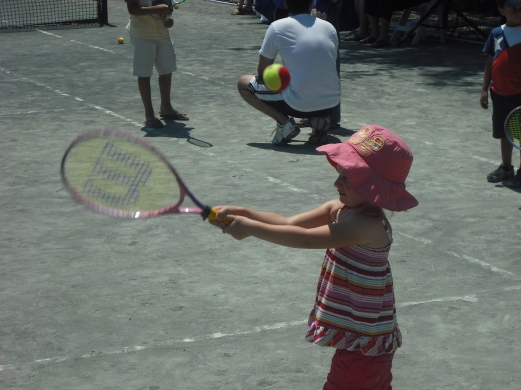 The Junior Tennis Champions Center (JTCC), the world-class tennis training center in College Park, Md., will host its 14th annual Tennis Festival on Saturday, May 4 from 3:00 to 5:00 p.m. The complimentary tennis clinic for children of all skill levels, including those without any previous experience, will provide tennis techniques and tips. Kids ages 5 to 12 are invited to join JTCC’s esteemed coaching staff and junior tennis champions to practice game skills and participate in agility drills. Throughout the clinic, coaches will be noting the skill level of each participant and will invite 20 promising participants to enroll in the first three weeks of JTCC’s training summer camp free of charge.

This might be the best thing you do for your kid all year. There are two schools of thought when it comes to encouraging a sport and both of them come together on May 4. You want to expose your child to the sport you love. And at some point, you want to know how they compare against other youngsters in the game. Come out to College Park and do both. In addition to games and activities for the kids, they’ll also get some complimentary pointers  from some of the world’s coaching on staff. So if your child looks like she has the incredible potential required of a junior champion, you might get an expert opinion right on the spot.

Due to the limited number of participant slots available for the JTCC Free Tennis Festival, parents are encouraged to register their children as soon as possible. To register, send child’s name and age as well as the family’s contact information to festival@thetccp.com.

RSVP:  To reserve your child’s spot, send an email with child’s name and age along with family contact information to festival@thetccp.com.

The Junior Tennis Champions Center (JTCC) is a non-profit 501 (c)(3) organization and a world-class training program that provides highly motivated young people with the athletic and academic instruction they need to excel on the tennis court and in the classroom. Since its inception in 1999, JTCC has placed all 95 of its graduates at top universities, with graduates earning more than $1.6 million in athletic scholarships.

Luca Corinteli: Ready Like A Raven For Battle As A Wahoo

Luca Corinteli: Ready Like A Raven For Battle As A Wahoo

I’d like to think that Luca Corinteli and I have a few things in common. We both spent our high-school years as Alexandrians, we both love the Superbowl XXXXVII Champion Baltimore Ravens and we both love hitting the hard courts in suburban Maryland. Difference is, he’s a Junior Tennis Champions Center prodigy and I’m a weekend hack. The first few similarities pretty much got me through this brief interview with a major DC/Baltimore Future ATP contender after he had lost a three-setter for the 18s title at the Easter Bowl.

On you taking Gage (Brymer) to the brink today in the Easter Bowl Final: Do you hope for any epic battles between UVA and UCLA?

Playing against Gage today was definitely difficult. I really felt like today’s match was in my hands and being up 6-3, 3-1 and letting it go is tough to swallow. I know all of the kids going to UCLA in the fall and all the talent they have now so the next couple of years will really be competitive and fun between these schools. Hopefully, I can get revenge next year at the NCAA’s when it matters a little bit more. Haha!

I am most definitely excited to work under Coach Boland and Coach Pedroso in Charlottesville next year. I know that these two coaches are the best in college tennis and they know what it takes to get me to the next level which is a professional. As far as being on a team, I am super pumped to represent the University of Virginia and play along many of my close friends. It is something I have never done and I feel like I could be a great teammate for those guys.

I don’t think playing on the West Coast is too much of a disadvantage for me, at least. I don’t want to speak for other East Coasters, but as a very frequent traveler I have played in over 12 countries so I have gotten used to being out of my comfort zone and it is something I embrace now. 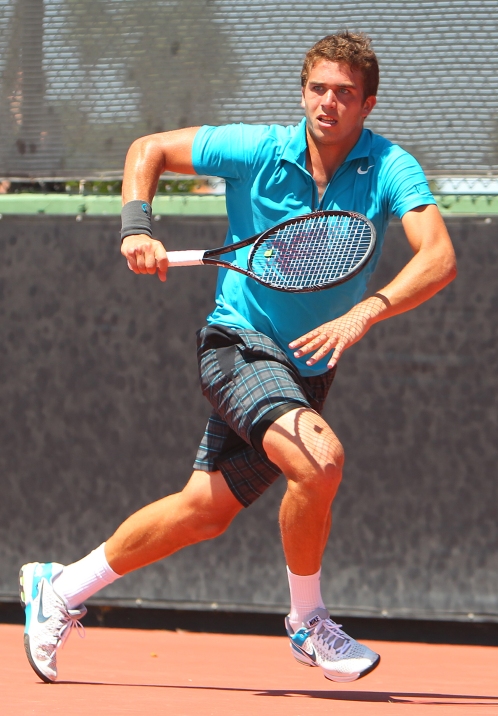 Although you’ve trained in Boca, tell me about your time at JTCC and the DC talent you’ve met in training.

I was at the USTA in Boca for 3 years and last September I went back to the JTCC. All of the coaches there are great and really know what they are doing with the future stars and people are already on the tour like my very good friend, Denis Kudla. I work with coaches Vesa Ponkka and Frank Salazar and I love every second of it. The JTCC will keep producing players because of how well they run the Academy.

My sister actually went to TC and I would have gone there as well if I did not play tennis seriously. I probably would have been a tight end for the Titans. I don’t know if there is one memory I can single out as my favorite as being an Alexandria resident, but I love taking walks in the summer around Old Town with friends and family just because it is so nice.

Also a Baltimorean here. How great was it to be the only tennis player who picked the Ravens when no one else did?

I am so proud to be a Ravens fan. I knew it would be a difficult thing to do but the coaching staff and Ray Lewis really got all the guys playing really hard and it is something I’ll never forget for my whole life. I know the beginning  of free agency looked bad for us but I like the moves we made and I think we will be contenders for a championship once again next year!

—Steve Fogleman, with Big Ups to Steve Pratt and Dave Kenas, the photographer who provided this week’s visual smorgasbord.

I’d be remiss if I didn’t mention Colette Lewis, who helped me discover respect for all things Easter Bowl.

THE OPPORTUNITY TO EARN A BERTH INTO 2013 US OPEN

Remember how I made this sound like so much fun? Well, I did it and now it’s your turn…..

“Anyone who dreams of playing in the US Open—top junior players, collegians, teaching professionals, ‘weekend warriors,’ or recreational players—can make that dream a reality through the US Open National Playoffs,” said Dave Haggerty, USTA Chairman, CEO, and President. “The level of singles and mixed doubles competition is always strong, while our committed USTA sections do a terrific job running the sectional qualifying tournaments. It all makes the event unique and special for our sections, US Open fans and tennis players across the country.”

The US Open National Playoffs begin as a series of sectional qualifying tournaments and will be held in 13 USTA Sections throughout the country (see complete schedule on page 2). The 13 men’s, women’s and mixed doubles champions or top available finishers from each sectional qualifying tournament will advance to the US Open National Playoffs – Men’s and Women’s Singles Championship, held August 16-19, and the Mixed Doubles Championship, held August 21-24. All three tournaments will take place in conjunction with the New Haven Open at Yale presented by First Niagara, an Emirates Airline US Open Series event. Tickets for the 2013 New Haven Open at Yale went on sale on Tuesday, March 5, and can be purchased at www.emiratesusopenseries.com.

“It’s always amazing to see the passion and determination of those competing to fulfill their dreams of playing in the US Open,” said Derek Fisher, US Open National Playoffs Tournament Director. “We’re excited for another group of talented players and the perfect host—The New Haven Open at Yale presented by First Niagara—to make the fourth US Open National Playoffs the strongest yet.”

More than 1,200 players competed in the 2012 US Open National Playoffs, ranging from experienced professionals who were once ranked in the Top 50, to upcoming junior players, to current and former college standouts to recreational players of all playing abilities and walks of life. Participants included those competing for charities as well as pastors, musicians, lawyers, reporters and stay-at-home mothers. Former notable participants include Olympic skier Bode Miller and ESPN’s Mike Greenberg, who teamed with six-time US Open champion Chris Evert in mixed doubles.

The past champions of the US Open National Playoffs are:

The US Open Qualifying Tournament will be held August 20-23 and the US Open Mixed Doubles Championship begins August 28 at the USTA Billie Jean King National Tennis Center in Flushing, N.Y. The 2013 US Open begins on August 26.

Additional information on the US Open National Playoffs is available now at www.USOpen.org/NationalPlayoffs.