WASHINGTON — Francis Tiafoe, the No. 6 ranked junior in International Tennis Federation, has received a wild card entry to the main draw of the Citi Open® Tournament. It will be the College Park, Md., native’s first foray into an ATP World Tour tournament’s main draw.

Tiafoe, 16, won the Citi Open® Wild Card Challenge in June and earned his spot with a wild card entry in the qualifying rounds. Tournament officials, however, decided that main draw play would be more fitting for the hometown player.

“We’re excited to watch Francis in his first main draw match,” said Jeff Newman, tournament director. “This is his hometown and this is where he trains, so we expect a great crowd to come out and support him.”

Tiafoe trains at the Junior Tennis Champions Center in College Park, one of the leading training programs in the country. In 2012, he became the youngest winner of the Orange Bowl Championship, and earlier this year, played at both French Open Juniors and Wimbledon Juniors.

“I’m so excited to play in my first main draw ATP event and I can’t imagine a better place to play than in front of my hometown crowd,” Tiafoe said. “I’m so thankful to the Citi Open® for giving me this great opportunity.”

Three other juniors will receive a wild card entry into the qualifying rounds, beginning Saturday, July 26. Stefan Kozlov, 16, the current No. 2 ranked junior in the world, reached the finals of both Australian Open Juniors and Wimbledon Juniors this year. University of Virginia junior Ryan Shane, 20, helped the Cavaliers win the NCAA championship in 2013, and was recently named “Player to Watch” by the Intercollegiate Tennis Association. Jordi Arconada, 17, the runner-up in the Wild Card Challenge, will take Tiafoe’s place in the qualifying rounds.

Frank Tiafoe of the JTCC

“It is an honor to host the International Tennis Federation and the USTA Hard Court Championship,” said Ray Benton, chief executive officer of the Junior Tennis Champions Center at College Park. “In just its second year, the tournament is already a must-play for junior tennis players. With its designation as a Grade 1 tournament, this year’s championship will attract top junior talent. We are thrilled to be chosen by the ITF and USTA to host this event.”

“The USTA is pleased that the USTA Hard Court Championship is returning to the Junior Tennis Champions Center – this year as an International Tennis Federation Grade 1 tournament. The field was strong in 2012 and will likely be stronger this year,” said Lew Brewer the director of junior competition for the USTA. “The facility is outstanding and the staff at the JTCC do a great job making the players feel special. We think the tournament has found a great home at the JTCC in College Park and we hope to keep the tournament here for many years to come.” 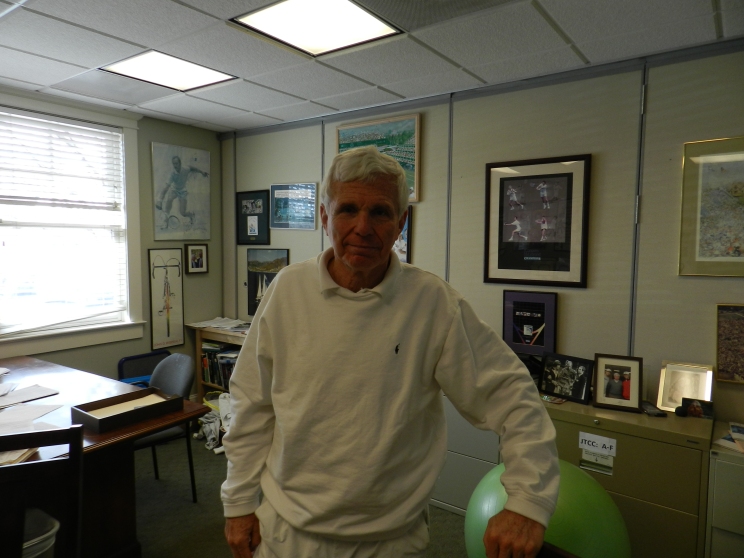 The upgrade to a Grade 1 event makes the JTCC one of only three ITF Grade 1 tournaments within the United States, the other two being the Easter Bowl in Palm Springs, Calif. and the Orange Bowl in Bradenton, Fla. The Junior Tennis Champions Center hosted the inaugural International Hard Court Championship (Grade 2) last year when Jamie Loeb won the girls singles and Wayne Montgomery won the boys singles.

The Junior Tennis Champions Center (JTCC) a 501(c)(3) organization, is a world-class training facility located at The Tennis Center at College Park. Its goal is to provide the athletic and academic instruction needed for talented and highly committed young people to excel both on the tennis court and in the classroom. Since its inception in 1999, JTCC has placed all 95 of its graduates at top universities, with graduates earning more than $1.6 million in athletic scholarships. 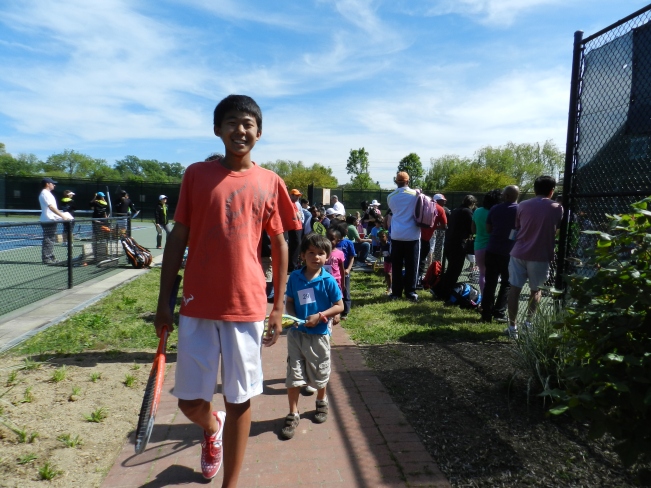 Evan Zhu leads the 4-6 year olds like a flock 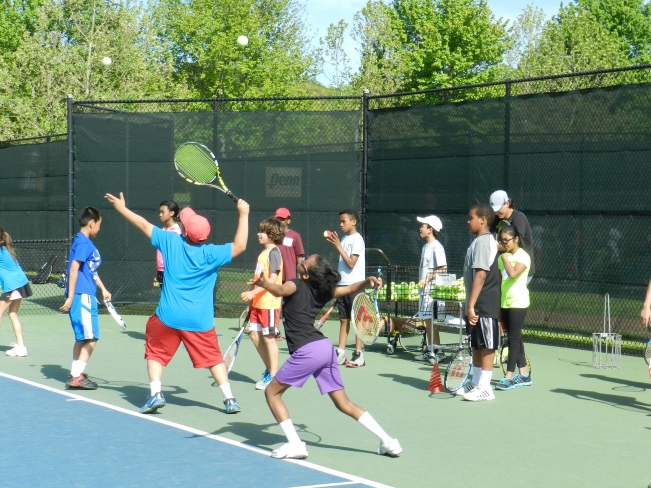 It was a perfect day in College Park for the Junior Tennis Champions Center’s 11th annual Free Tennis Day. As a connoisseur of Kids Days, if there is such a thing, I particularly enjoyed this one. This was a Kids Day with a twist. There was no moon bounce and no face painting going on here. This was the real deal.

You’re not just having fun, kids.

You’re being watched. And timed. And measured.

If you’re a tennis parent who even once fantasized about your 4 year old playing college tennis someday, this was your kind of Kids and Parents Day. Mine slept on the ride from Baltimore to the JTCC and woke up on the wrong side of the car seat. She was #48 and she defaulted when she demanded to be carried in from the car. Annabel settled on hitting solo against the wall.

There were over 350 people on hand for the event and at least 125 kids participating. Over the next two weeks, the JTCC’s coaching staff will deliberate over the participant’s performances. 20 of the entrants will receive offers for summer camp scholarships and one will receive a scholarship into the Junior Tennis Champions Center. Remember, this is the same event where today’s Tallahassee Champion Denis Kudla was ‘discovered’ 10 years ago ‘on this very night’, and you begin to understand the allure of this free-for-all event. It’s democracy in action in tennis.

The most unusual part of the day occurred when Slice, the Ms. Pac-Man of the Washington Kastles, was spontaneously attacked by children in an impromptu and slightly-frightening display. By the time the cameras (camera) got there, the little ones had switched to fists from racquets. Slice took it in all stride and has a bright future in elected office. Anyone who can take that kind of feedback at a Town Hall meeting and shake it all off is a lock for Congress.