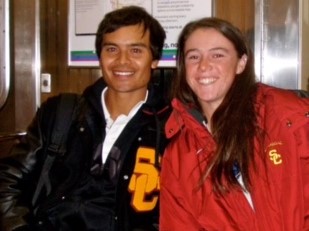 Former USC women’s assistant coach West Nott is rolling out West Coast Tennis Tours this summer for high performance juniors and college players looking to take their game to the next level.

Nott and his coaches will host the West Coast Tennis Tour this summer and will travel to 13 open prize money tournaments from May 15 to Aug. 12. The tour will begin in San Diego and make stops in places like Santa Cruz, Calif., Salem, Ore., and in Seattle for one of the oldest tournaments in the country, the Washington State Open which has been played every year for 128 years.

“We want to get young players to compete more,” said Nott, who severed as the Trojans’ women’s assistant coach for 10 seasons. “The tour is geared toward high school and college players who are seeking more pressure-filled match play. All levels are welcome. This is one giant road trip and we are connecting all the dots A to Z for a memorable life experience and seeing sights along the way.”

The tour is something Nott experienced himself last summer as a player. Now he wants to share what he learned and saw to others. He added that all results from the tournaments will go toward a player’s Universal Tennis Rating.

“It was a road trip of a lifetime,” said Nott, who grew up in Midland, Mich., and played his college tennis at Georgia Tech.

“This is for college players who are looking to makes some leaps in the lineup,” he said. “We will learn life lessons while competing. There’s more to tennis than just hitting cross courts.”

Nott’s coaching staff includes some of his former players who made the NCAA Final Four twice, won four Pac-12 championships and reached an NCAA national No. 1 team ranking in 2015.

A second project Nott is working on is College Tennis Tours where he will be hosting a trip to the NCAA Team Men’s and Women’s Championships May 17-22 at Wake Forest University in Winston Salem, N.C. Nott said more information on the tours will be released shortly, but the trip provides the “ultimate college viewing experience for all junior players aged 13-18,” he said.

Tennis instructions and seminars will take place during the trip, as well as catching all the Sweet 16, Elite Eight, Final Four matches and NCAA Team Championships in men’s and women’s tennis. For more information, check out: info@collegetennistours.com.

“The whole idea behind these business projects is to get young players fired up about college tennis and competing,” Nott said.