Saturday was simply spectacular at the Citi Open in Washington. The fired-up crowds for the women’s doubles final and the Kyrgios-Tsitsipas men’ semifinal were unprecedented in my decade at this event. Fans paid upwards of $300 to get into the sold-out men’s semifinals yesterday. Between the dry conditions all week, also unprecedented, and the the stellar player field, this Citi Open was bigger and better than ever.

Tournament owner Mark Ein, who also owns the Washington Kastles, couldn’t have imagined that the weather would cooperate for him in this fashion, nor did he know Cori Gauff was going to come to Washington straight off of Wimbledon. He didn’t know that Andy Murray would make his triumphant return to Washington only a year after exiting on pain in suffering here. 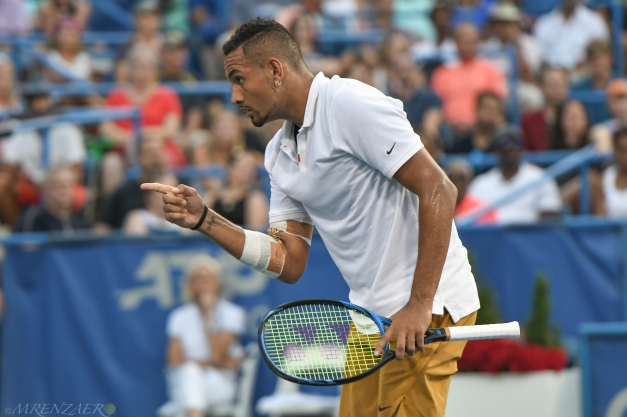 Let’s face it, the only thing that didn’t go Mark Ein’s way this week was that, in a perfect world, Andy and Jamie Murray would be playing for the doubles title this afternoon. Sure, Sloane Stephens, Genie Bouchard and Madison Keys dropped early, but that happens everywhere, every day. All tolled, this nine day event was nearly flawless and everything the new owner could have hoped for when he signed on. 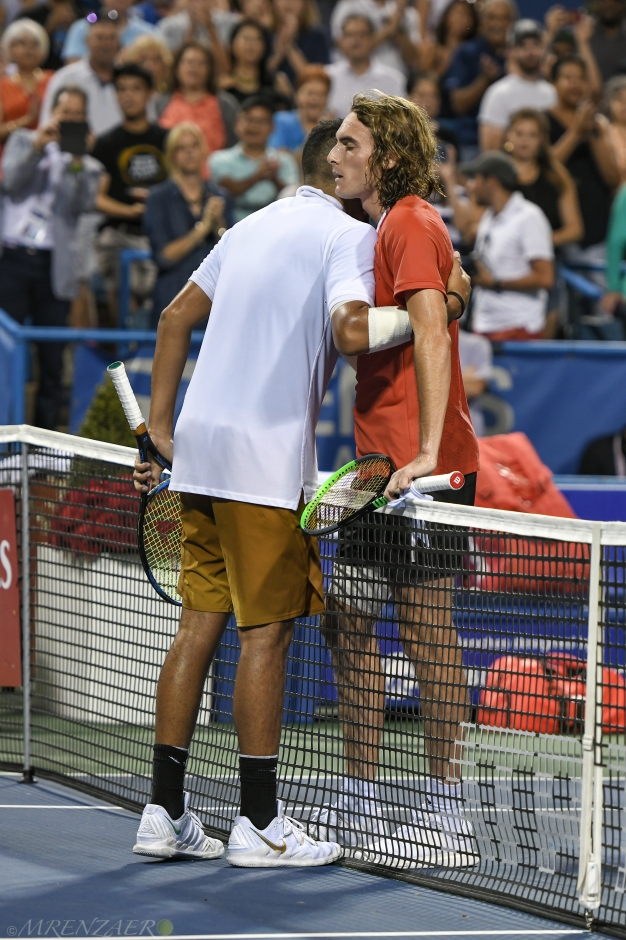 Whether Daniil Medvedev, Nick Kyrgios or Camilla Giorgi notch another title and get their names installed on the ring of honor on Stadium Court today will be entertaining. Whether Jessica Pegula wins her first tour level title in front of an American audience would be lovely, but at the end of this week, I can reflect and say that the real champions of this event are the staff and volunteers who make order from all of this chaos known as a pro tennis tournament. And for Mark Ein, he’s got to be proud of his champion among tournaments that was the 2019 Citi Open.

Camila Giorgi looks to win the third title of her career tomorrow after a 7-6, 6-1 victory over young American Caty McNally at the Citi Open in Washington earlier today. This is Giorgi’s first crack at a Washington final. The Italian won her latest title at the Linz Open in Austria in October of last year and has a record of 2-4 in WTA finals. 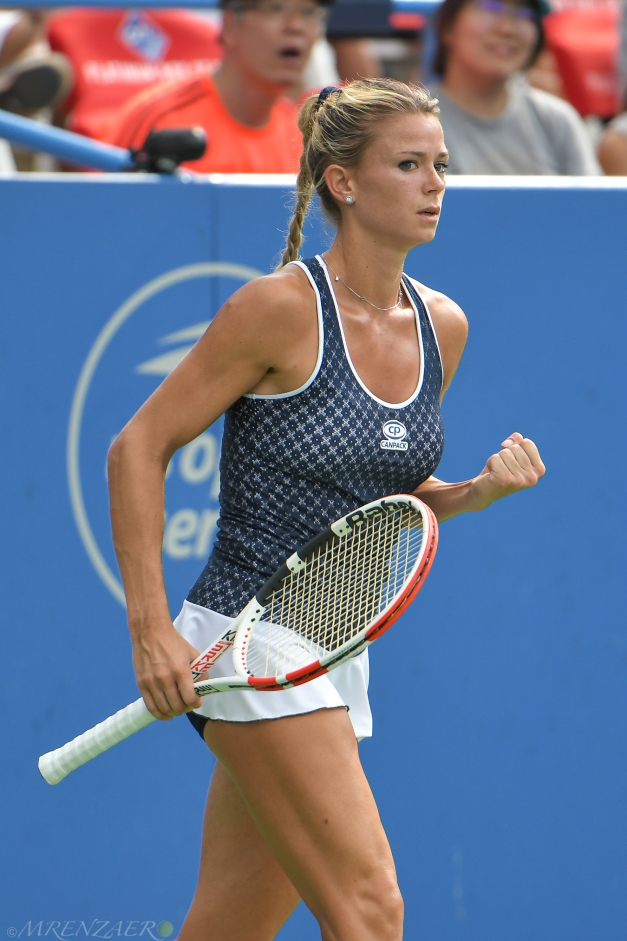 Giorgi’s run this week has been stellar. She knocked out a red-hot Sachia Vickery in straight sets, and a 3-set comebacker over Rebecca Petersen, followed up with straight set wins over Zarina Diyas and McNally today.

McNally had an impressive week in singles and the 17-year-old multiple junior grand slam champion is set to play in the doubles final later this afternoon with fellow American Coco Gauff after she rests up from the semifinal loss. 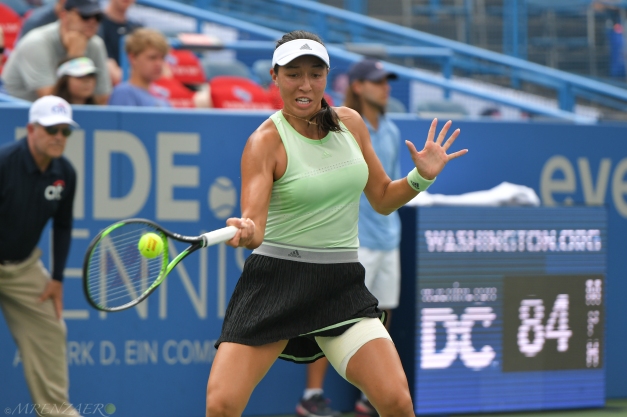 I’ve seen her in tennis club cafeterias at ITF events and witnessed her trying to qualify for bigger tournaments countless times throughout the United States, but I saw Jessica Pegula do something different today: make the final of a WTA international level tournament. She did so by defeating the qualifier Anna Kalinskaya, 6-3, 3-6, 6-1 in a Citi Open Women’s Semifinal in Washington.

The first set was all Pegula, and Kalinskaya required a medical timeout to deal with cramping before holding her own through the second and pushing the third set. There was nothing left in Kalinskaya’s tank at that point and Pegula took the finale in a breezy 6-1 affair.

Tour level success has been elusive for Pegula thus far for the 25-year-old Buffalo, New York native. Since turning pro in 2013, she’s only enjoyed one such final appearance: on the carpet in Quebec last year where she fell to Pauline Parmentier. She’s a rich girl, and she’s gone too far, storming all the way into the vaunted final of the Citi Open, where the likes of Magdalena Rybarikova, Sloane Stephens and Svetlana Kuznetsova have won glory, if not household notoriety. 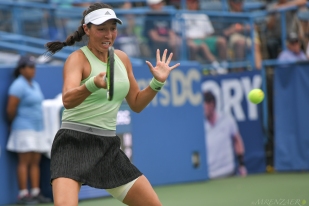 Looking ahead to tomorrow, Pegula has a 2-1 head to head record against Camila Giorgi, but the two haven’t met in match play in seven years. She’s 1-1 against Caty McNally, having beaten then 16-year-old McNally on clay last year in Tampa in straight sets before losing to now 17-year-old McNally in straight sets on the hard courts of Midland, Texas.

Lucky Loser Norbert Gombos First Man to Reach Round of 16 @CitiOpen, Wasn’t Even in Main Draw This Morning 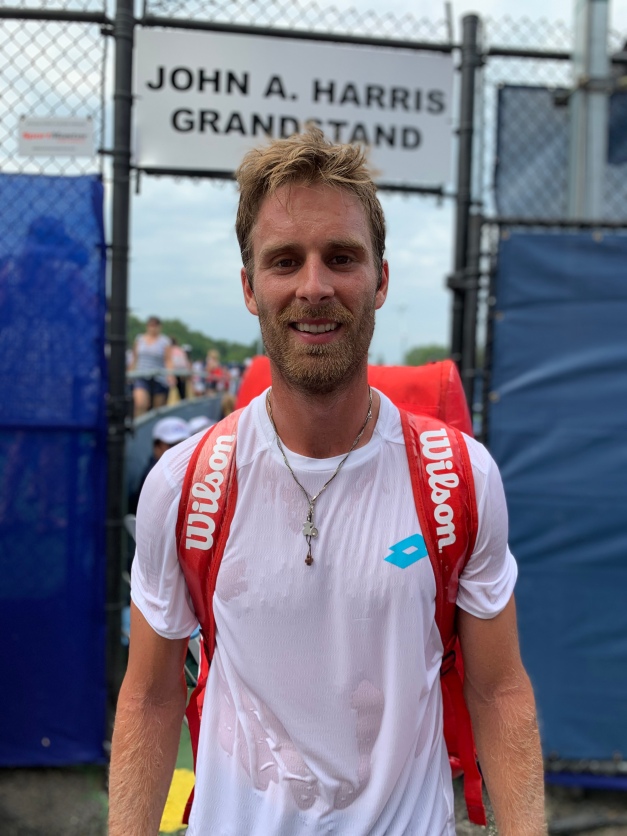 Lucky Loser Norbert Gombos First Man to Reach Round of 16 @CitiOpen, Wasn’t Even in Main Draw This Morning
Steve Fogleman in Washington

Norbert Gombos got a good night’s sleep last night. That was a good thing.

“I was here and practicing, and I’d already booked my flight ticket back home for tomorrow,” he said after his upset win against Adrian Mannarino of France at the Citi Open in Washington. “I just woke up and was already set up for a practice with Tsonga, and I signed up for lucky loser.”

He was defeated by American Tim Smyczek in qualifying on Sunday. After he signed up for lucky loser status this morning, he was shortly thereafter informed that Kevin Anderson might be withdrawing (right knee pain), which gave him less than three hours to get ready for his match.

It was, in fact, like winning the lottery. “I’m just happy to play again here, against the top players in the world,” he told me. And the 28-year-old Slovakian will face another surprise in Miomir Kecmanovic, who upset Pierre Hugues Herbert in three sets this afternoon. One of these guys will become a Citi Open quarterfinalist.

In WTA play, American Jesse Pegula was down a set and a break but managed to claw her way back to victory over Iga Sweitak of Poland.

In what has become an almost-too-familiar ritual at WTA tournaments everywhere, the Citi Open’s top seed was eliminated in first round action on Tuesday afternoon. This time, the giant was Sloane Stephens and the disrupter and victor was Rebecca Peterson in a 6-2, 7-5 mild surprise that lasted 88 minutes. 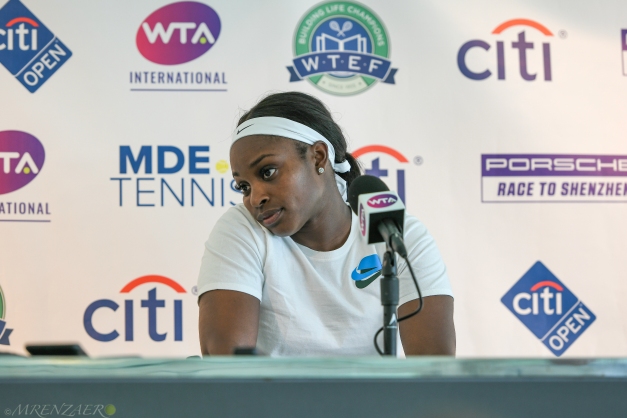 Stephens sprayed shots throughout both sets and won only 38% of her first set first service points. Peterson played a cleaner game and grabbed 71% of her first serve points. “I’m just really happy with the win. Just fought for every point. I was not thinking too far ahead.” This is Peterson’s most impressive win of her career. “It feels great. I’m really happy with the way I performed today. It was quite tough. It’s the first tournament since Wimbledon, so I knew I had to be focused and play my game.”

Peterson will face either Sachia Vickery or Camila Giorgi in the second round. Giorgi and Peterson have not met in WTA tour level play, but Sachia Vickery holds a 3-1 career head to head lead over the Swede.

The @CocoGauff Show at @CitiOpen Was Even Better Than I Expected

Qualifying has a familiar refrain in tournaments the size of Citi Open in Washington. Qualifying rounds on day one are full of matches, but strangely,  it’s also a relaxing day for the press because interviews are sparse and post-match press conferences are almost unheard of. Previous qualifying crowded matches historically followed University of Virginia men or other local institutions like the Junior Tennis Champions Center, but not today. The buzz around Coco Gauff today was almost unprecedented in my coverage as a blogger over nine years, what with a full-blown post-match presser and Big Camera everywhere beaming her throughout the D.C. universe and all over the world.

Attendance at her Stadium affair today against Maegan Manasse was massive, easily the biggest crowd to ever witness a first round WTA qualifying match at Citi Open, and I’ve been every year, including the one in College Park, Maryland while the men were playing the last Legg Mason Tennis Classic here in 2011. The only crowd as big as the one at Gauff’s first match since Wimbledon that was arguably as large was the crowd that cheered on Sloane Stephens in the 2015 Women’s Final. It wasn’t just the numbers, it was the post-match cacophonous scrum of juvenalia acquiring autographs and snapping selfies that was straight out of the US Open–or SW 19. It was Wimbledon on the Potomac today. 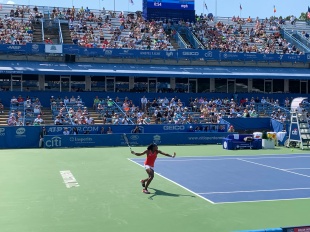 And how refreshing was it to see the women rule the day for once at this slightly lopsided joint tournament, a WTA International analogous to an ATP 250 tournament to the men’s 500 on the same courts? Not only were these raucous netheads straight out of Fed Cup, but the Stadium EMPTIED OUT before the players had even come out on court for the following ATP qualifying match between Michael Mmoh and xxxx, I’m sorry, one Gleb Sakharov. Exciting time to be alive in men’s qualifying, isn’t it?

It was the reverse of every Sunday finals at the event since the WTA Citi Open in College Park and the Legg Mason Tennis Classic were conjoined by Donald Dell in 2012. It was Bizarro World to show my age. And it was long overdue. Here’s to a repeat tomorrow.

I woke up this morning knowing that everyone else would write about Gauff and I was determined to reflect on everything else going on at the Citi Open, and I tried. Francesca DiLorenzo and Victoria Duval played a very close match with DiLo prevailing 6-4, 6-3. Fanny Stollar and Xioadi You fought a brutal three-setter and the heat clearly took a toll on both of them but the look in the eyes of the eyes of the diminutive You said everything. You see those qualifying eyes when a competitor loses and knows they could’ve won if they hadn’t run out of gas first. It’s a marathon for players, tourney staff, fans and bloggers alike and that’s all we need to remember after this fabulous first day of a nine day hike in Rock Creek Park. And the name Coco Gauff. 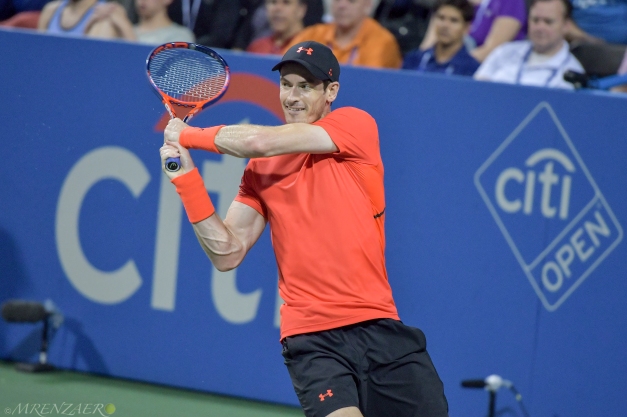 Another deep and talented doubles field will descend on D.C. next week with all 10 of the ATP World Tour’s Top-10 doubles players set to compete at the Citi Open.

Former world No.1 Andy Murray is also among the headliners in the men’s doubles field as Murray returns to Washington for a rare chance to partner with his brother Jamie.

While the Murray brothers have teamed up in the past, those occasions have primarily come during international competitions such as the Olympics or the Davis Cup. 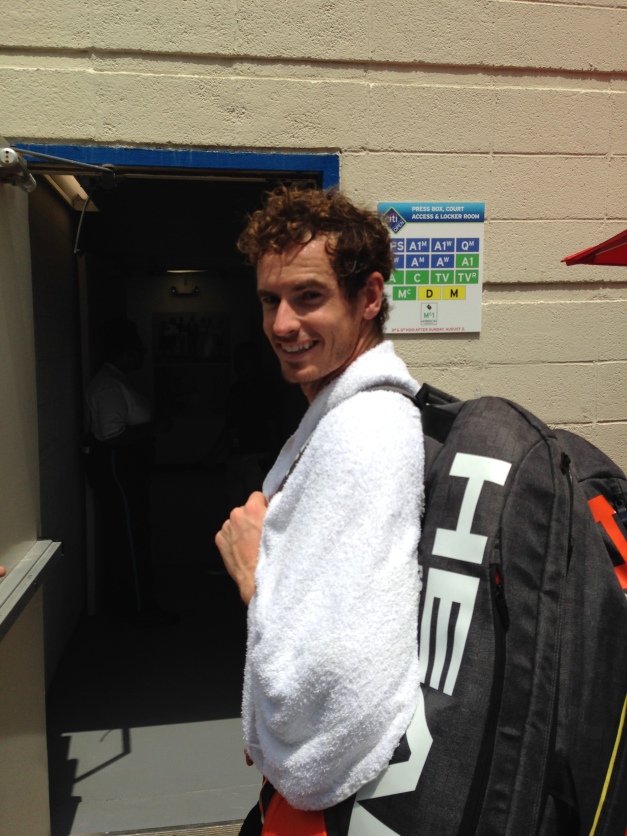 But with Andy Murray primarily playing doubles this year as he continues his comeback from hip surgery, the Citi Open presents a rare opportunity for the Murray brothers to partner in an ATP event. Jamie is ranked No. 8 in doubles and is a six-time Grand Slam champion in doubles competition.

Jamie, 15 months Andy’s senior, won the Citi Open doubles crown last summer with then-partner Bruno Soares. Soares, who is fresh off competing for the Washington Kastles, is back this year as well with partner Mate Pavic of Croatia.