It’s been a bummer summer down under: On the upside, Serena Williams ended a three-year title drought by winning in Auckland, and the leftovers of the Hopman Cup produced some exciting matches. The downside: No Hopman Cup, and the optics of players having to retire due to smoke from devastating bush fires at qualifying in Melbourne. It’s not a good look when you’re supposed to be in the business of protecting your hard assets, the players, by playing dumb during a natural disaster.

And that’s exactly what Tennis Australia has done. Perhaps the Australian tournaments have given Ozzies something to take their mind off of the daily troubles of worrying about their friends and loved ones. The Australian Open has dealt with the disaster on a reactionary basis, waiting for players to speak out before they do. My heart goes out to Australia and a Shake-My-Damn-Head goes out to Tennis Australia.

In the meantime, let’s turn the page on pre-Open action, get this major on and get this sport out of here so this country can get back to recovery.

Alas, the first “jewel” of the Grand Slam is upon us.

Whether Serena William’s title in Auckland will break the floodgates here and get her back to Grand Slam glory remains to be seen. As close as she has been in New York in back-to back years tells me it’s been a cerebral condition and flat out, I expect to see her in the semifinals at worst.

Who’s quarter is this anyway?

Naomi Osaka is the #3 seed, and she’ll be tested if she wants to reach the semis. After an opening round match against Marie Bouzkova, she’ll likely square off against Saisai Zhang before heading to the third round against one of Venus Williams, Coco Gauff, Sorana Cirstea or Barbora Strycova. I’ll predict that she’ll face Cirstea in R3 before falling to Serena Williams in the quarters.

Serena’s path is far more manageable than Osaka’s to win the section. After an opening round match against Anastasia Potapova, Williams may face Qiang Wang for a second round win. In the third round, I’ll go with Dayana Yastremska after surviving Johanna Konta in the second round. A win over Yastremska to reach the quarters is no easy feat, but Williams should prevail.

2020 Adelaide champion Ashleigh Barty has a surprisingly easy ride to the semifinals in her quarter. Her main challengers, Petra Kvitova and Madison Keys, face difficult early round contests and it will be impressive if Kvitova and Keys can even make it to the quarterfinals.

Simona Halep’s section of the draw is also a glide path to the quarterfinals, provided she gets by the plucky Jen Brady in R1, which I expect. Belinda Bencic should face her in the quarters of what would shape up to be an upset free quarter of the draw, but I’m going with Kontaveit to upset her in the third round before Kontaveit loses to Sabalenka in the fourth round. Just a hunch here.

Karolina Pliskova already has a trophy in the bag this year with a 3rd Brisbane title. That’s good for her because the draw is filled with spoilers. World #6 Elina Svitolina is the least of her problems should she reach the final.

Pliskova starts with the unpredictable Kristina Mladenovic. A second round match would see her facing the winner of the Siegemund-Vandeweghe contest. After that, she could hit a speed bump against Pavlyucheckova, Vondrousova, Giorgi, or even Kuznetsova.

And finally, it’s time for a new segment called “Potentially Worthy Picks”. These are big upset bets with big paydays. Remember that this is for amusement purposes only, and if you actually place a real bet and it doesn’t win, please don’t flame me on twitter. 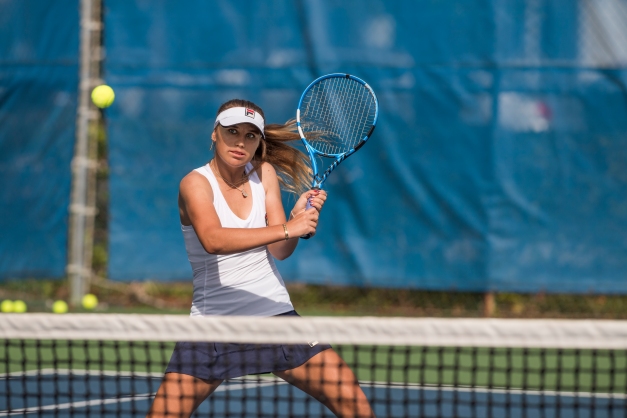 (FILA Global) – FILA announced today that it has signed a sponsorship agreement with American tennis player Sofia Kenin. Kenin will join the company’s roster of endorsed WTA and ATP World Tour players who wear the FILA® brand on-court.
“Sofia is an incredible young talent who has a bright future ahead of her in the sport,” said Gene Yoon, Global Chairman at FILA. “After an impressive 2018 season, she is poised to become one of the next rising stars in women’s tennis. We are thrilled to welcome her to the FILA family and support her on her tennis journey moving forward.”
Kenin, 19, is currently the No. 52 ranked WTA singles player. She was formerly a Junior US Open Finalist and the winner of the USTA Girls’ 18’s National Championships. Since turning pro in 2017, Kenin has won four ITF titles and reached an additional four finals. This season she had two wins against Top 10 opponents, and her ranking improved nearly 150 spots. In addition, this week she will make her first appearance on the US Fed Cup team as they compete against the Czech Republic for the title.
“It’s an honor to be a part of such an iconic brand that has a long, rich history of partnering with some of the best tennis players in the world,” said Kenin. “I’m excited for the opportunity to wear FILA and to have the brand’s support, both on and off the court, as I continue my career.”
—M. Van Tuinen

The Canceled @WTACruise Was a Ruse. Thank God Fans Shunned It.

Your link to the WTA Legends Cruise (Photo: WTA, Getty)

The @WTACruise Was a Ruse. Thank God Fans Shunned It.
WTA Legends Cruise Offered So Little for So Much

I’ve taken a few cruises in my life and I enjoyed them, but I have so many friends who think a Caribbean cruise is somehow a lower middle class way to travel. They bemoan the institutional-level food. They have nightmares of obese, hirsute travel companions who are too scared to even travel to Europe. My elitist East Coast friends are wrong and they need to get over it. And they would have been able to indulge their expensive tastes if the WTA’s outrageously-overpriced Legends Cruise had ever set sail.

Royal Carribbean’s Enchantment of the Seas may have looked like a pension-plan booster for WTA employees when it planned to disembark from Miami this November with four VIPS on board–Chris Evert, Lindsay Davenport, Arantxa Sanchez-Vicario and Jen Capriati. Bethanie Mattek-Sands, Shelby Rogers and Lucie Safarova were also scheduled on the the four night, five day adventure with exotic ports of call like Key West, Nassau and Royal Caribbean’s private isle, Coco Cay.

First, let’s talk about cruise hierarchy. This was a short cruise to relatively lame destinations. Some cruises take you to Aruba, Cayman, and Guadeloupe. The four night quick jaunt to the Bahamas and Key West was a cruise-lite. And Coco Cay is a commercialized little place where all the souvenirs and food on the island are provided by Royal Caribbean. The only locals you’d meet there are independent contractors of the cruise line who come to peddle their wares for you. Luckily for those independent contractors, there’s no competition amongst them, so that would’ve meant higher prices for you and no authentic local flavor. A complete cultural waste of a day in the Caribbean in my opinion. Yes, I’ve been there.

Because it’s a weak itinerary, you can score some great deals on a cruise like the WTA Legends junket if you still want to cruise. If you can wait a month, you can book the same luxury stateroom for 40% of the price of the WTA Legends Cruise. Stateroom 7136 on the Enchantment of the Seas, for example, is listed at $1838.80 for a family of three (mine) for a December voyage on Royal Caribbean’s website. It was $4,469.00 for November’s Legends Cruise. That’s would’ve been $2,630.00 more for the same stateroom just to hang out with Chrissy and Bethanie all week…or not.

You could’ve even watched the players play a little beach tennis on Corporate Cay, I mean, Coco Cay.

There would have been a Q&A session with the players and some kid’s quick play courts on deck. Wow.

Then there was the regular cruise ship itinerary repackaged to sound tennis-y.

So there must have been some other major extras, right? Right, but those extras cost majorly extra.

For example, you could hit with a pro, but no one currently inside the top 40, with up to 75 of your closest cruise-mates for two hours…for $299.00 per person.

You could have had dinner with your choice of Shelby, Jen, Arantxa, Lucie or Bethanie with five other guests who werer willing to shell out $399.00 per person to eat the food you already paid for with your cruise ticket.

But there is one thing that those inflated cruise prices wouldn’t get you: A freaking autograph. This is the part where I became incensed enough to take the time to write this post, and I believe that’s what killed this cruise.The WTA Legends Cruise had an “Autograph Policy.”

You were going to pay extra for this, so listen up.

If you wanted an autograph with one of the players, you’d have to buy a pass for $249.00 per person. That would have gotten you into an  All-Access autograph session where you could procure ONE autograph of each player and they wouldn’t even let you pose for a photo. Don’t even think about trying to score one like you’ve been accustomed to at every tournament in the world, like asking for one for free.

The WTA was going to be watchin’ you, man.

“Outside of the structured autograph session, there will be no autographs given by players for the duration of the cruise. This will allow you to enjoy conversation, casual interaction, playful competition and photo opportunities with the players knowing that autographs have a time and a place.

All players will adhere to this policy, so we ask that you refrain from asking for autographs outside of the set autograph sessions.”

Yes, autographs have a time and place, like never in the middle of a match. This, my friends, was simply fan financial abuse.

Short advice would have been to skip this boondoggle of a WTA money-maker. The cruise was a ruse. Save yo’ money, honey—and you did by not booking a stateroom. You could have booked a cruise on the same ship, taken the $2,630.00 you saved and went to any tournament in the United States with that money and gotten all of the autographs you wanted. Hell, now you can even watch current players inside the top 40 competing in meaningful matches, including men!

Chris Evert is always running around the grounds of a tournament covered by ESPN, and she’s always happy to give autographs when not shackled by the handcuffs of the now-defunct WTA Legends Cruise’s protection racket.

Week-long ticket plans in Charleston start at $525. Go there instead next year. You can even take a cruise from there from $300.