It was a chilly, rainy and windy day at the Optima Open today, where fans anxiously awaited the final between Frenchman Fabrice Santoro and Belgian Xavier Malisse. It was not really a surprise that the two players who most recently departed the tour made it through to the final. Malisse was considered the favorite in this match as the Belgian had won all four previous encounters with the French magician, even though only one of those four matches ended in a straight sets victory. Malisse had qualified for the final by beating defending champion Goran Ivanisevic and 2010 Optima Open runner-up Pat Cash. Santoro had gotten past Greg Rusedski and fellow Frenchman Henri Leconte. In Saturday action, Ivanisevic had claimed second position in group two by beating Cash 6-4 6-4. This was already the third time these two had met on Belgian soil, as Ivanisevic had also beaten the Australian at the ECC exhibition tournament in Antwerp in 1990 and here in the Optima Open final in 2010. Rusedski finished second in group one with a 7-5 6-3 win over Leconte in the first match between these two. 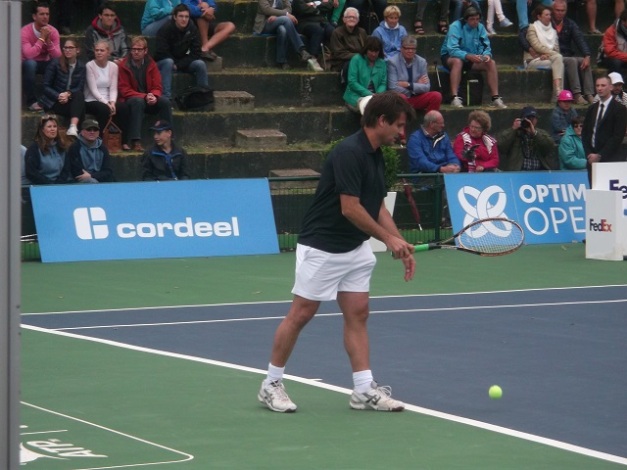 Santoro came up short in the final

Both Malisse and Santoro got off to a good start with neither player giving the other one a look into their service games. The rain started to come down in the sixth game in which Malisse got to 15-40 on the Santoro serve and it was hard for both players to move on the slippery court. Play was suspended at deuce and after a short break the players returned to the court and Malisse took the first two points to get the first break of serve. This proved enough to take the opening set 6-3. Malisse managed to get to 15-40 in the opening game of the second set, but Santoro saved both with aces and saved a third one with a good lob. At 2 all, X-man got a break opportunity again because of a Santoro double fault but he missed an easy passing which got the Frenchman back in the game. A volley error by Santoro and a forehand winner from the Belgian gave Malisse the break to go up 3-2. Malisse got into trouble in the next game, but with some great shotmaking he came back from 0-40 to clinch the game and take a 4-2 lead. The big hitting Belgian then broke again at 5-3 to clinch the match 6-3 6-3. 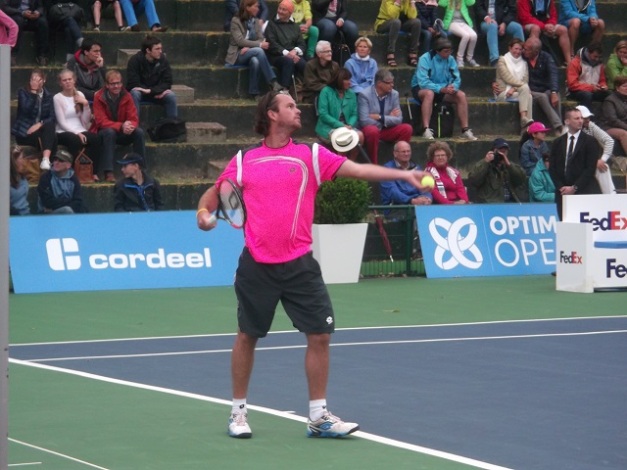 Malisse served well and was the champion

It was a fun match for fans to watch as you saw big ground strokes vs artistic touch shots. In his victory speech, Malisse said it was a lot of fun to play an event like this and joked about the fact that he had to run a lot more in this match against Santoro than in a regular match on the ATP tour. He also signaled his desire to play here again if he gets another invitation. 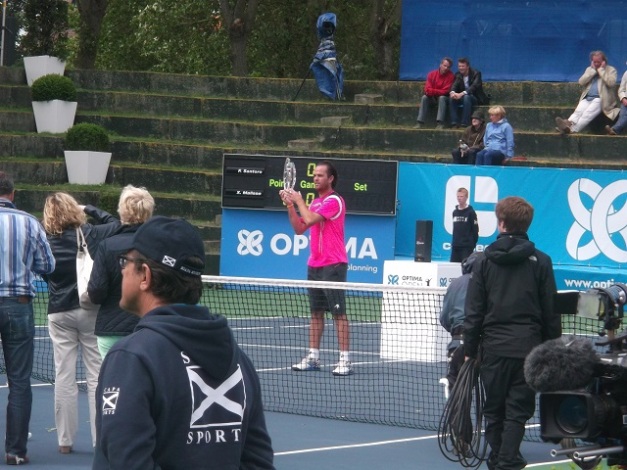 The match was followed by another eagerly awaited match, the exhibition in which we got to see three former world number ones and the number one ball magician in the world. John McEnroe/Monica Seles vs Kim Clijsters/Mansour Bahrami. They had also played the final match on Saturday, which the latter had won 9-7. Under supervision of Chair Umpire Henri Leconte, we got to see some beautiful rallies, but unfortunately rain interrupted play in the sixth game. The rain got even heavier later in the evening and the match was cancelled altogether. The tournament got a nice closure with a signing session from McEnroe and Clijsters which was well attended as almost everyone wanted a picture with the Belgian and the American legend. It was a well-organized tournament which again proved why it is easily one of the most popular events on the Champions Tour. See you again in 2015 ! 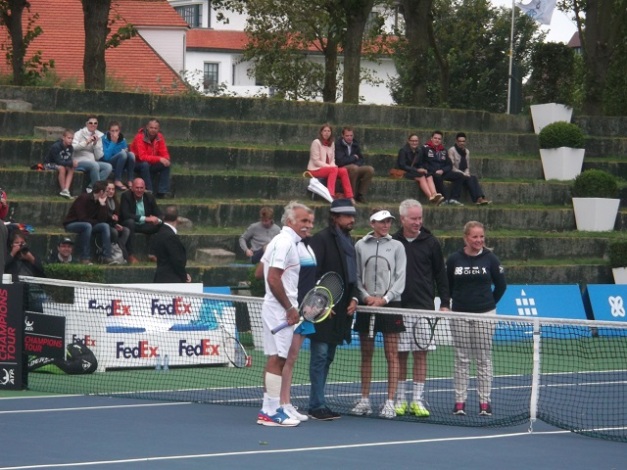 A rainy start of the day in Knokke-Heist as play did not get underway until 3.30 pm. The spectators either hung around centre court or enjoyed themselves in the public village where all kinds of activities were going on. Shopping at the Scapa Sports store, trying to serve as fast as Rusedski and Ivanisevic at the serving contest, getting financial advice at the Optima stand or simply enjoying the variety of food and drink options available. 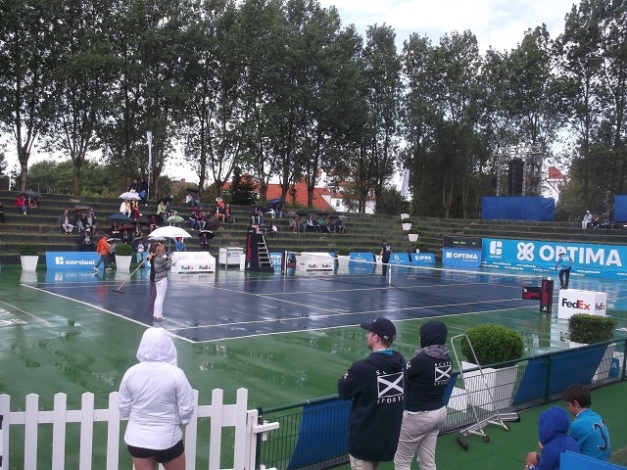 A rainy morning in Knokke-Heist

First up was the match between Xavier Malisse and Pat Cash, two players from totally different generations. Powerful baseline shots vs serve and volley. Malisse could be considered the favourite beforehand after beating Goran Ivanisevic on Thursday and with the 15 year age gap in his favour as well. Already in the opening game Malisse showed what his intentions were for this match. He mishit a forehand on his first breakpoint and could not do anything about the second because of a great serve but he did use his third chance as Cash hit a backhand wide. In the second game Cash gots his chance to get the break back after a Malisse double fault but Malisse repaired the damage by hitting a good serve and eventually held. At 0-2 down Cash saves another breakpoint with a good volley and from that moment on we got to see a very interesting match with as expected the baseline dominance from Malisse and some really magnificent net reflexes from the 49 year old Australian. Malisse got his first setpoint at 5-3 on the Cash serve but a good volley from the 1987 Wimbledon champion made it deuce. Malisse had to serve it out himself to take the opener 6-4. 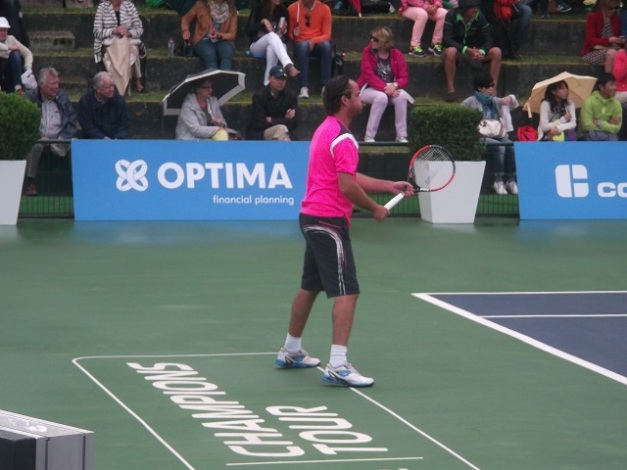 Already in the opening game of the second set X-man get to breakpoint but a good serve and volley point from Cash saved him from dropping his serve right away like in the first set. At 2 games all Malisse went up 15-40 on the Cash serve, Cash hit a great stopvolley first but forehand passing from the Belgian proved to be too much for him. Serving to stay in the match at 3-5 Cash was in trouble again and with a good lob Malisse sealed the deal and won 6-4 6-3. With this win Malisse is the first player to qualify for Sunday’s final. In an on court interview he discussed how he enjoyed playing in front of a Belgian crowd as there are not many events in Belgium. It’s not as serious as the matches on the ATP Tour but  the combination of entertainment and competitive tennis made it very pleasant. 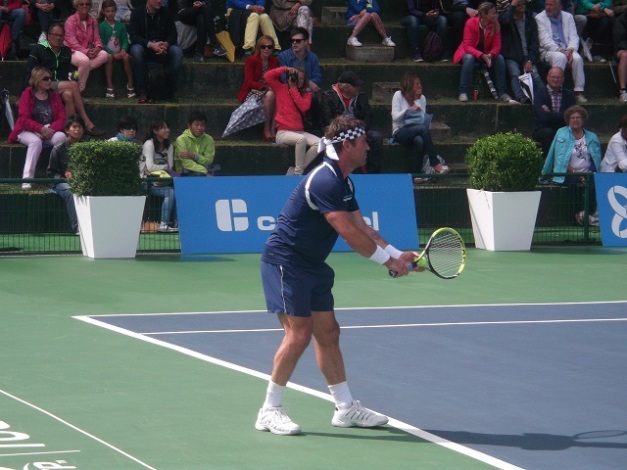 Pat Cash was out-muscled by Malisse

The match was followed by the all French battle between Fabrice Santoro and Henri Leconte from group 1. This was a much anticipated match as both are very gifted players who both hit beautiful shots and can combine those with the entertainment that is such an important part of the ATP Champions tour. Both men began by hitting one beautiful shot after another. Santoro was the first to break as his lob at 15-40 in the third game is too good for Leconte. With Santoro leading 4-2 the match was suspended because of rain. In the last point before the delay Santoro joked around playing with an umbrella in his hand. When the players came back on Santoro got another breakpoint which Leconte saved with a big forehand winner. He saved another one with a good volley but the third is one too many as he netted a backhand which gave Santoro a 5-2 lead. Santoro served it out to 15 to take the opener 6-2. 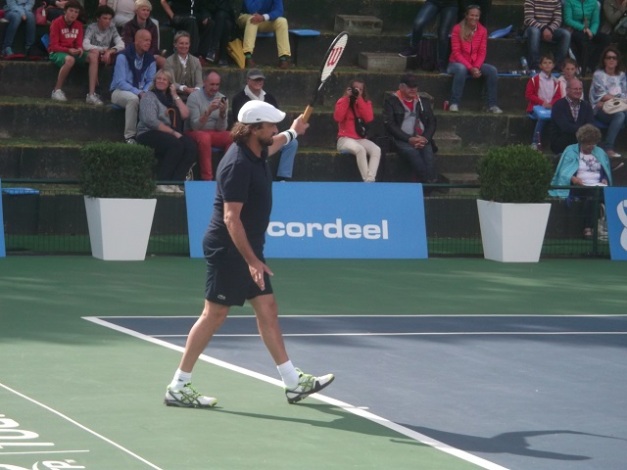 Already in the opening game of the second set Santoro broke the Leconte serve again as Leconte missed a volley down 30-40. Even though both men want to win putting on a show for the crowd is very important to them both and as a result we see many trickshots and other unusual ones, we even see a young boy filling in for Leconte as he doesn’t know how to handle the tricky shots from his friend. All in all a very entertaining match with Santoro winning 6-2 6-4, which books the Frenchman a place in Sunday’s final vs Xavier Malisse. 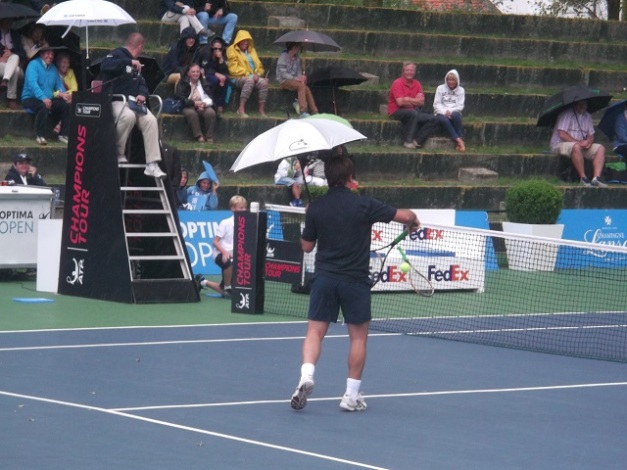 Santoro with his umbrella

followed by
Greg Rusedski vs Henri Leconte
followed by
J.McEnroe/M.Seles vs M.Bahrami/K.Clijsters