WASHINGTON (July 23)—Yanina Wickmayer broke early in the first and second set before a small crowd in brutal heat at Citi Open in Washington today to advance to tomorrow’s WTA final, 6-4, 6-2 over Yulia Putintseva.

Putintseva had three double faults and no aces and found herself down 5-1 to Wickmayer in the first before breaking back and hitting 4 aces in the final four games. Wickmayer held on to hold serve when it mattered most, at 5-4.

Though clearly in an early match haze, Putintseva seemed composed by the end of the first, and there were expectations that the match would tighten up. After a long first service game by Putintseva to begin the second set, Wickmayer came up with the break and was not letting Putintseva back in this one. Putintseva only managed to win about 20% of her return points. That’s not good enough to advance to a final.

Wickmayer will face either American Jesse Pegula or American Lauren Davis in tomorrow’s final, so she won’t be a crowd favorite. Her title match experience and four titles will make her a prohibitive favorite to become the 2016 Citi Open Women’s Champion. 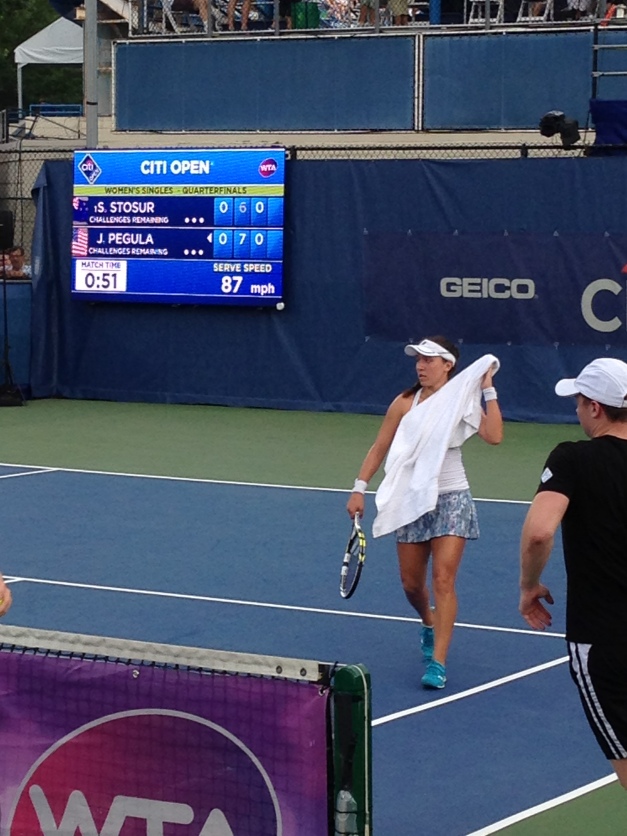 Fridays can be a little sad at a tennis tournament. You notice the almost-bare practice courts, fewer players passing by, and mostly, less fans zigging and zagging their way through the grounds en route to a match on a far-flung court. Everyone, it seems, is now inside the Stadium and Grandstand watching a limited number of matches of paramount importance.

Well, this Friday had a few surprises on the court. Freaky Friday, as it were.

The women were relegated and cursed to spend all match eternity away from Stadium Court, and so they battled it out on Grandstand 1. Top men’s seed John Isner fizzled on Stadium, and you could feel the hot winds of change blowing through the Washington tournament.

Top Seed Sam Stosur felt the freak the hardest, as she was stunned by Jessica Pegula in straight sets. Pegula survived a first set tiebreak before going into Beast Mode in the second, and the former US Open champion was reduced to rubble, 7-6(4), 6-3, by the #173-ranked Pegula, who moves on to face….

Yanina Wickmayer was the first on to the semis today, with a turnaround 4-6, 6-3, 6-4 victory over Kiki Mladenovic in 2:11 under sunny skies in 91-degree heat. Wickmayer went on to play doubles after the win. And she won again, telling me that the conditions weren’t the worst she’d seen. “We have”, she replied. “A lot of times it is humid and hot conditions and that’s just how it is. I guess it’s for both of us. Your opponent has to deal with the same conditions. We just have to hang in there and stay positive.”

Awaiting Wickmayer will be Yulia Putintseva, a winner over Risa Ozaki in straights, 6-4, 6-2 in 86 torturous minutes. Putintseva, who hit a career high ranking of 35 in June, is playing excellent stateside tennis in 2016. Wickmayer has a 1-0 head to head with Putintseva. 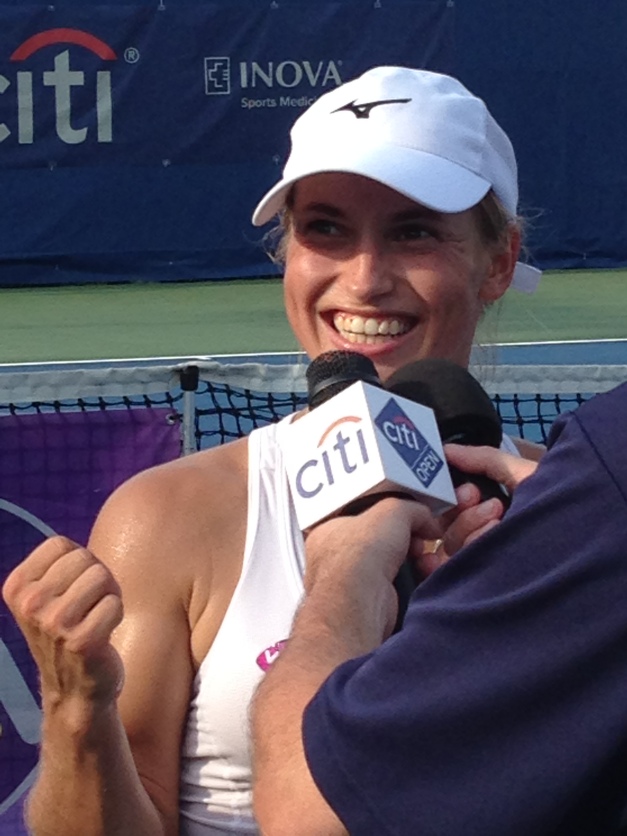 As far as I am concerned, this will be the real final. Although Poots has never won a WTA tour title and Wickmayer has four, these are solid top 50 players, unlike the participants in the other semifinal, the all-American one, who hope to break the top 100.

Everyone in the business of making money on this tournament wanted Sloane against Sam for the final. The television ratings, the re-tweets! It would’ve been great. I would call what they have on their hands a small marketing disaster, except for the fact that tournament organizers here have never really cared nearly as much about the women’s event for it to count as a disaster. Some hopes are raised as an all-American semifinal between Pegula and Davis tomorrow night will guarantee an American a spot in Sunday’s final.

With just 4 WTA titles combined among the semifinalists all belonging to Wickmayer, this ‘disaster’ also represents an opportunity for three young women to come away with a maiden title. Where were you when Jessica Pegula won her first WTA title? And where will you be when Poots or Davis nabs hers?

Louisa Chirico was ready for the battle. “I was ready for her today”, she proclaimed on court after a first round win at the Volvo Car Open in Charleston, South Carolina. Osaka was at a career-high ranking of #95, and the 18-year-old just beat Sara Errani in Miami two weeks ago and looked strong in qualifying. Chirico, the American wild card, was up to the task. After double-faulting the first set away to Osaka, Chirico stole a service break in the first game of the second set and never looked back en route to a 3-6, 6-1, 6-1 runaway victory. Chirico committed six double faults in the first set but found her serve just in time for the second set. She’ll face Lucie Safarova in the next round.

Daria Katkasina also advanced early in the day with a 6-2, 6-1 breezer, beating Saisai Zheng in straight sets on Stadium Court. The 18-year-old Kasatkina favors clay and it showed. After making the quarters at Indian Wells last month, she’s at a career high #35 and made good on her Charleston debut. Today also marked the 100th win in her pro career that’s less than two years old. She expressed surprise at the milestone, saying “100th already? I only started playing pro last year. It’s unbelieveable… Last year I played seven months on clay. I really like the surface and I like to play here.” Kasatkina plays Ana Konjuh in the second round.

Shuai Zhang and Yulia Putintseva also moved on to second round play, with Zhang knocking out qualifier Lesley Kerkhove, 6-1, 6-2 and Putintseva running away from Kurumi Nara 7-6(4), 6-0. Zhang will face Daria Gavrilova, while Putintseva will meet Sabine Lisicki.

Main Draw Time at Citi Open: Get Here Before the Olympics Ruin it Next Year!

Main Draw Time at Citi Open: Get Here Before the Olympics Ruin it Next Year!
Steve Fogleman, Tennis Atlantic

It’s Citi Open main draw time, so do yourself a favor and get down here if you live within two hours of Washington. If this is a poor man’s Flushing Meadows, then find me at the Alms House. And like many other amazing things in life (I’m thinking of the McRib Sandwich), it’s only available for a limited time. Next year brings the official Olympics Tennis Talent Drain, so I wouldn’t expect to see Andy Murray or Kei Nishikori at Rock Creek Park in 2016. In addition to the talent drain that the Olympics brings, it also drains the tennis ‘buzz’ out of the American tournaments around the time that the Summer Games are played. Even in the press room, writers here in 2012 seemed to be more interested in what was happening in London than what was happening on Court 2 in Washington.

Louisa Chirico began main draw play on Stadium Court by embarrassing Heather Watson, 6-3, 6-0. Chirico has come a long way from the Charlottesville ITF just a few months ago. In the next round, she’ll play Alize Cornet. 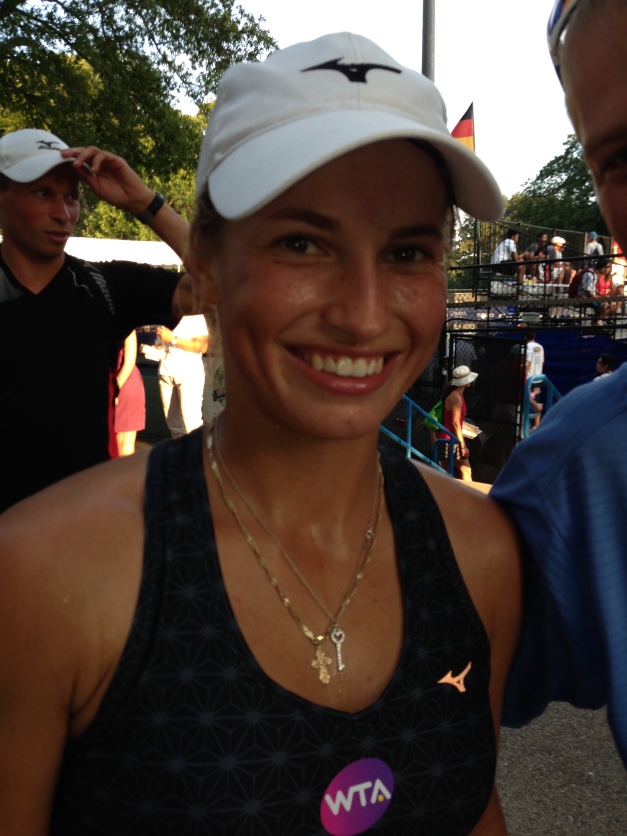 Yulia Puntintseva abused a lot of rackets today in advancing to the second round. You would think if you won a third set tiebreak in an International-level event, you’d just consider yourself lucky to be moving on to the next round. Not Yulia. She fist-pumped and pointed across the net as if to call 2014 Citi Open Kurumi Nara a complete loser. God bless her.

19-year-old Chung Hyeon: Wow, did this guy impress. The dude destroyed Dudi Sela in 57 minutes. Chung converted less than half of his break chances, but when you’re getting 13 chances to break, you’re going to win an ATP match handily. The crowd was solidly for Sela, with local blond-haired kids waving the Israeli flag and celebrating wildly, even on Chung’s lone double fault.

And for all the annual ad-nauseam talk about some disparity of treatment between the WTA and ATP, give it up. People complained that the men dominated Stadium Court every night, and they were right. They were right because it’s an apples and oranges comparison with the ATP 500 event (a more important tournament in money and ranking points) than the WTA International-level event. However, today the WTA kicked off on Stadium Court and they’ll do it again tomorrow when Coco Vandeweghe and Christina McHale begin play at 2:00 p.m.