Noah Rubin earned a career-high scalp, besting top American player John Isner tonight in second round action at the Citi Open in Washington. Isner played poorly and Rubin seized the opportunity, stunning the appreciative crowd and most of all his mother, Melanie Rubin, who was reduced to tears of joy as she watched her son take the match 6-4, 7-6(6). The only thing stranger than Isner’s feeble serve tonight was a shoe malfunction that victimized Noah Rubin in the first set. Rubin did double duty tonight, facing Andrey Rublev two hours later for a spot in tomorrow’s quarterfinals. 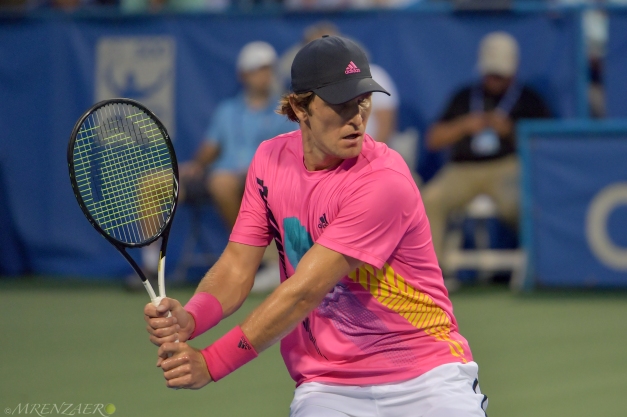 The fans in Washington got their  Brother Palooza, with Little Bro Sascha Zverev eliminating Big Bro Mischa Zverev 6-3, 7-5. The match was historic as it pitted the ZBros on the same ATP tour level court for the first time. 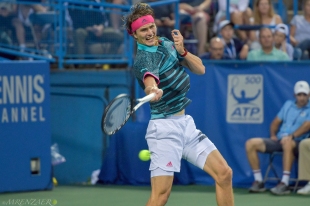 Sascha Zverev, 2018 Citi Open (Photo: Mike Renz for Tennis Atlantic)
An Instant Classic it was not, and the word “epic” shouldn’t be used in this paragraph. The first set breezed by as Zverev got the set’s only break at 4-3. The second set was more like Errorpalooza with both players being broken. Sascha faced more break point chances than Mischa did in the second set, but in the end, Sascha got the break at 5-all and that was all he needed for the defending champion of the event to return to the quarterfinals. After the match, the brothers made nice and hit the doubles courts to finish winning their suspended match against the top seeds, Mate Pavic and Oliver Marach. It’s fair to say that the Zverevs stole the show on Thursday…you would think. But’s there’s still time for Rubin (he’s currently down a set) or Alex de Minaur to win two singles matches in this session and that would top Brother Palooza. But that’s a tall ask.