CHARLOTTESVILLE, Va., October 31, 2012 – The Main Draw resumed on Wednesday at the Charlottesville Men’s Pro Challenger at The Boar’s Head Sports Club, and the singles quarterfinals of the USTA Pro Circuit event are halfway set. The lower half of the bracket took to the courts on Wednesday, and the top remaining seed, No. 2 Alex Bogomolov Jr., had a busy day.

Bogomolov, currently ranked No. 96 in the world, started off the day with a 6-3, 6-4 triumph over American wild card Austin Krajicek. He then teamed with American Donald Young in a thrilling doubles match against the team of Alex Kuznetsov and Mischa Zverev, but he could not make it two-for-two, as the latter prevailed 12-10 in the match-deciding tiebreak. 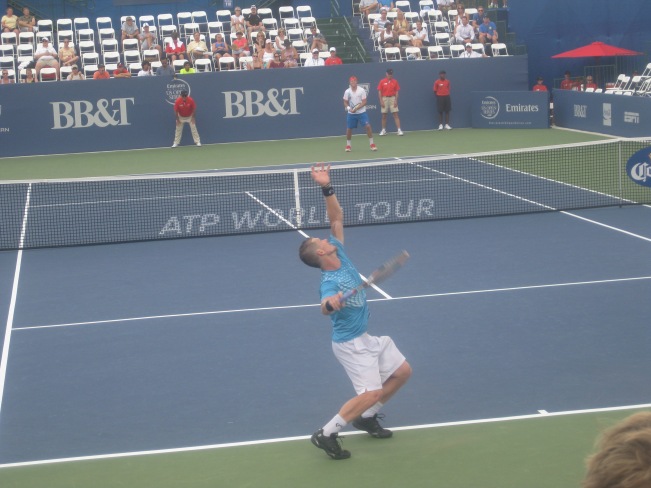 The Russian-born Bogomolov, who currently resides in Boca Raton, Fla., will go up against Tennessee native Rhyne Williams in the quarterfinal round, as Williams survived a three-setter over former college rival Steve Johnson, 4-6, 6-4, 6-4. Kuznetsov advanced to the quarterfinals with a 6-4, 7-6(5) victory over South African qualifier Fritz Wolmarans. Next up for Kuznetsov will be 22-year old Californian Bradley Klahn, who upset No. 7 seed Tim Smyczek, 4-6, 7-6(9), 6-3, in the night’s final match.

Also in doubles action, Denis Kudla and Jesse Levine became the first pair to make it to the semifinal round, as they upended Australia’s Carsten Ball and Chris Guccione. No. 4 seeds Devin Britton and Krajicek got past qualifiers Samuel Groth and Daniel Kosakowski to move on to the quarterfinals.

Thursday’s highlights include the conclusion of the second round of singles, including the matches of No. 6 Bobby Reynolds, who will face John-Patrick Smith of Australia, and No. 8 Kudla, who takes on Switzerland’s Michael Lammer. Former University of Virginia great Somdev Devvarman will take on Japanese qualifier Taro Daniel in the featured match on Court 7. On the doubles side, the top-seeded duo of UVa alum Treat Huey and Reynolds will take on another former Cavalier, Drew Courtney, and his teammate Christian Harrison. Boar’s Head’s own Brendan Evans and Jarmere Jenkins will team up to face Smyczek and Ryan Sweeting. A full schedule is listed below.

The Charlottesville Men’s Pro Challenger features 32 singles players and a 16-team doubles field. Thanks to the generosity of this year’s sponsors, admission to the tournament is free all week long, and will again benefit Special Olympics Virginia.

Once again this year, play at The Charlottesville Men’s Pro Challenger will take place on a limited number of courts, ensuring plenty of tennis action for fans both day and night. Main Draw matches will start at 11:00 AM on Thursday and noon on Friday. Featured matches will be presented throughout the week and will begin at approximately 7:00 PM each night. The semifinal matches will begin at 1:00 PM on Saturday and the finals will be played on Sunday, beginning at 1:00 PM.

The Boar’s Head Sports Club is located at 200 Wellington Drive in Charlottesville.

The tournament is one of only 29 professional tournaments and features men that will quickly rise to the upper levels of the ATP tour, play in the Grand Slam Championships and represent their country at the Davis Cup and in the Olympics. Ranked between 100 and 400 in the world, and representing over 100 countries, tournament participants include some of the best young talent in the game. Past tour participants who have earned their starts on the USTA Pro Circuit Futures Tour have included Andre Agassi, James Blake, Todd Martin and many others.

For more information on the Charlottesville Men’s Pro Challenger, visit The Boar’s Head online at www.boarsheadinn.com.