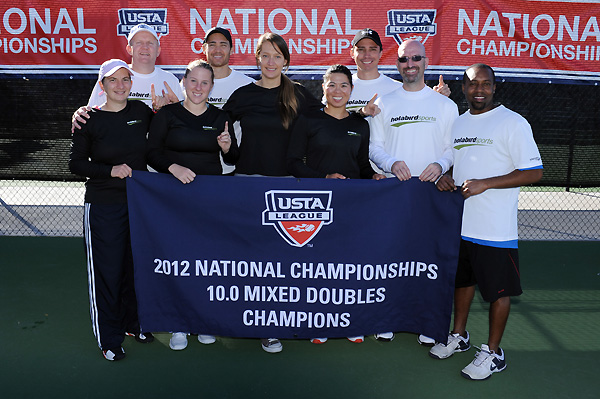 The Washington, D.C., team captured a 3-0 win over a team from Irvine, Calif., in the championship match. On Saturday afternoon, they defeated a team from Boise, Idaho, 3-0 in the semifinals. They advanced this far by winning their round-robin flight contested Friday and Saturday.

This year’s USTA League 10.0 Adult Mixed Doubles National Championship has drawn the top 12 teams from throughout the nation.

The USTA League Mixed Doubles is for men and women 18 years of age and older. Teams are formed by combining the two player’s individual National Tennis Rating Program (NTRP) ratings. The team’s total rating must equal: 2.5, 6.0, 7.0, 8.0, 9.0 and 10.0. The total NTRP rating cannot exceed the level of the team. For example, a 7.0 team could be a combination of two 3.5 players, or one 4.0 partner and one 3.0 partner. Play format consists of three doubles matches.

This year marks the 32nd anniversary of USTA League. Since its inception in 1980, it has grown from 13,000 participants in its first year, to over 835,000 players across the nation today, making it the world’s largest recreational tennis league.

USTA League was established to provide adult recreational tennis players throughout the country with the opportunity to compete against players of similar ability levels. Players participate on teams in a league format, which is administered by the USTA through its 17 Sections. The league groups players by using six NTRP levels, ranging from 2.5 (entry) to 5.0 (advanced). USTA League is open to any USTA member 18 years of age or older. It features Adult and Mixed Doubles divisions, as well as a Senior Division (age 50 or older) and a Super Senior Division (age 60 or older).

For the 2013 National Championship season, USTA League is changing its structure and format. The change will allow USTA League participants among three age categories (Adult 18 & Over, Adult 40 & Over and Adult 55 & Over and Mixed 18 & Over) to better align participants with players their own age. The restructuring guarantees more frequency of play opportunities at more appropriate age divisions.

Head Penn Racquet Sports is in its 25th year as official ball of USTA League.