Seven is a Winner for Melanie Oudin @PartyRockOpen Final in Vegas

Traditionally not a fast starter, the 22-year-old Oudin from Marietta, Ga., was broken in the first game of the match and dropped the first set 5-7, before gaining control of the match to reel off a 6-3, 6-3 win and capture her first title of 2013 and the $7,600 that goes along with it.

For the second straight year the singles final was contested by two Americans at the Party Rock Open, which was played under ideal and warm 82-degree desert temperature and in front of an enthusiastic crowd that enjoyed top-level tennis all week long, even though both players said they got off to a slow start Sunday due to nerves.

Vandeweghe, 21, had a long exchange with the chair umpire after a disputed line call with Oudin leading 2-0 in the third set and Vandeweghe serving at deuce.

A late out call by the linesman went in favor Oudin and she won the next point taking the crucial 3-0 lead.
“I thought the ball was out,” Oudin said. “It was just a late call. It makes sense to me. And I think that’s what happened. But she was obviously upset about it.”

Vandeweghe took what seemed like two or three minutes to get an explanation from the chair umpire. “I have no idea what happened there,” Vandeweghe said afterward. “There was no explanation. I did my best to come back and kept fighting.” 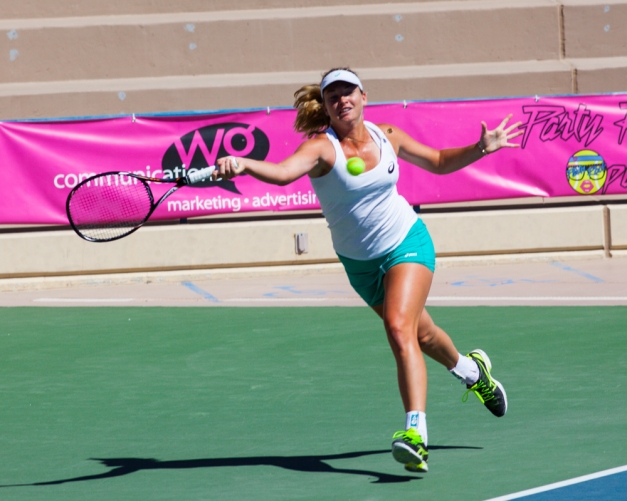 Vandeweghe did, indeed, breaking Oudin’s serve for 3-1 and then serving what Oudin called a “great” game in the fifth game to hold and make it 3-2.

Oudin said she hasn’t decided but would like to play the next Pro Circuit event in her home state, a $25,000 event in Macon, Ga. Then she will play three more $50K events, two in Canada and one in Florida before shutting it down for the season.

Oudin was asked by a local reporter if she gets tired of often being solely linked to her great US Open quarterfinal run in 2009. “Yes, that’s way over. That’s like so long ago now. I’m so past that. Waaaay past that.”

Vandeweghe, who won $4,053 for finishing runner-up, was able come back and win the doubles title a week after taking the Albuquerque Challenger doubles event as she Austrian partner Tamira Paszek, the No. 2-seeded team, took out the U.S. pair of Denise Mursean and Caitlin Whoriskey, 6-4, 6-2. The winning team split $2,786 ($1,393 each) while the finalists earned $1,393 total ($696.50 each). Mursean and Whoriskey were both three-time All-Americans from the University of Michigan and the University of Tennessee, respectively.