Janowicz, Querrey, Rosol, and Lu are semifinalists at @WSOpen 2014

Quarterfinal day, my final day at the Winston-Salem Open, was an eventful if disappointing one as the four semifinalists were decided. Spectators arrived to Center Court for four singles matches and one doubles match for the honor of playing on Friday in the semifinals.

The first quarterfinal was played between Taiwanese number one Yen-Hsun Lu and Italian Andreas Seppi. While the two are ranked closely and were both seeded in the 9-16 range at the event, their form could not have been more polar opposite coming into the Wake Forest event.  Lu has been in superb form, beating Berdych in Cincinnati and nearing his career high rank. Seppi, on the other hand, has a negative win-loss record this year and seems on the downswing.

Their respective forms were telling as Lu broke early. Seppi had chances to break back, but repeatedly missed returns. In fact, the return seemed to be the source of the vast majority of the Italian’s woes, as it repeatedly found the net and the point was over before it had begun. 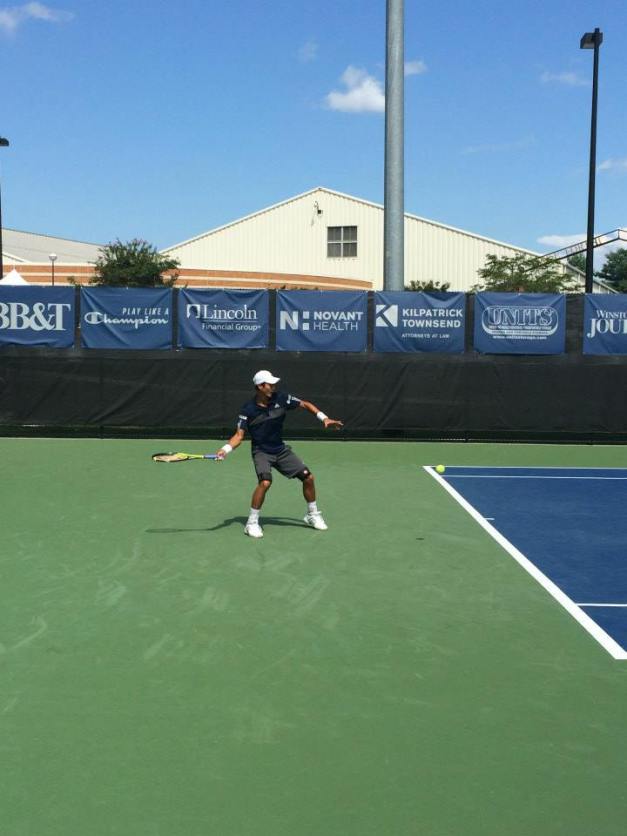 The second set began with a poor Seppi service game, where Lu broke to cheers from his coaching camp. It was around that time that the announcement was made that defined the day for many fans: 2012 champion John Isner had withdrawn from his clash with the big-hitting Czech, seventh seed Lukas Rosol. The marquee match of the day now canceled, the crowd seemed almost to will themselves into emotionally investing in the match at hand.

That task proved difficult as Seppi continued to play woefully- at one point getting a chance to get back on even terms at 15-40 only to miss four consecutive returns. The 6-4 6-4 final score was generous to the fourteenth seed as he struggled to ever make any headway on the Lu serve. The match ended with almost two hours before the next match, which while doubtless a boon to the concession vendors, was unkind to the fans who had to wait in the heat for David Goffin and Jerzy Janowicz to play the only other day session semifinal.

After the match finally began, Janowicz quickly broke. The Belgian’s serve proved an enormous liability, and although throughout the first set Goffin seemed the better player off the ground, the Pole’s potent returns coupled with his own huge serve (which was more reliable than normal) allowed for Janowicz to take the set 6-4 after a game in which the net and the side of the racquet favored him on more than one occasion. In the second set, the confident and aggressive baseline play coupled with excellent retrieval that led Goffin to win 25 straight matches was nowhere to be seen as he was broken twice to lose the match 6-4 6-2. Janowicz would advance to the semifinal to play the winner of the day’s night match.

With Rosol getting the walkover into the semifinals, the only other quarterfinal was contested between Sam Querrey and Guillermo Garcia-Lopez. Querrey had his serve and forehand working and he prevailed 6-7 6-2 6-4 as GGL faded late. In the only doubles match contested yesterday, Jamie Murray and John Peers beat Mariusz Frystenberg and Marcin Matkowski 6-3 6-4.