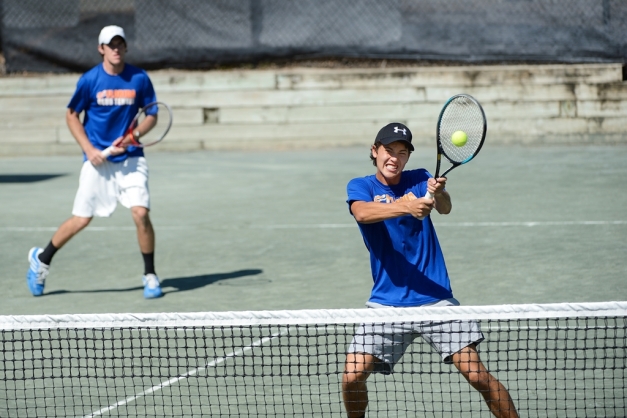 HILTON HEAD ISLAND, S.C., Oct. 12, 2014 – University of Florida became the first repeat winner at the USTA Tennis On Campus Fall Invitational as the Gators defended their 2013 title with a 25-18 win over Auburn University on Sunday at the Palmetto Dunes Tennis Center.

Captained by sophomore Max Koller of Daytona Beach, Fla., Florida showed its strength in doubles and won four out of the five matches in the World TeamTennis format final, including all three in doubles, at the fifth annual event that serves as the kickoff to the popular Tennis On Campus season.

“It was a long tournament and all the teams were really good,” Koller said. “The talent level was extremely high and we are happy to repeat as champions.”

Koller did not play on last year’s championship team, joining the squad in November. “After they won I saw a post on Facebook that they had won the big Fall Invite and I knew they had a really good team,” Koller said. “I wanted to be part of that and had heard how fun Tennis On Campus is.”

Both Florida and Auburn earned an automatic bid to compete for the national title at the 2015 USTA Tennis On Campus National Championship, to be held April 9-11, 2015, in Cary, N.C.

Auburn’s men’s singles player Mitchell Vegas of Spanish Fort, Ala., had the only set win in the final for Auburn, beating Florida’s Joey Rudy of Boynton Beach, Fla., 6-1.

“They had stronger doubles play today,” said Auburn Captain Christian Lyerly. “This is the farthest we’ve ever gotten so we were excited to be in the final.”

Earlier in the day, Florida just got past University of Georgia’s “B” team in one semifinal as the match went to a supertiebreaker with the Gators prevailing, 23-22. Auburn beat N.C. State “A”, 23-16 in the other semifinal.

In the third-place match, N.C. State “A” was down by two points going into the final mixed doubles match but pulled out a 6-3 set win for a 22-21 narrow victory over the University of Georgia “B”.

“We played really well and we won most of our matches by one or two points,” said N.C. State captain Phillip Cardella, whose team was beaten by Georgia “B” in pool play on Friday. “I think our girls are a lot better than last year so we should be pretty good this year.”

It was the second consecutive year the Wolf Pack has finished third at the Fall Invite. N.C. State won the Bronze title at the TOC Nationals in April.